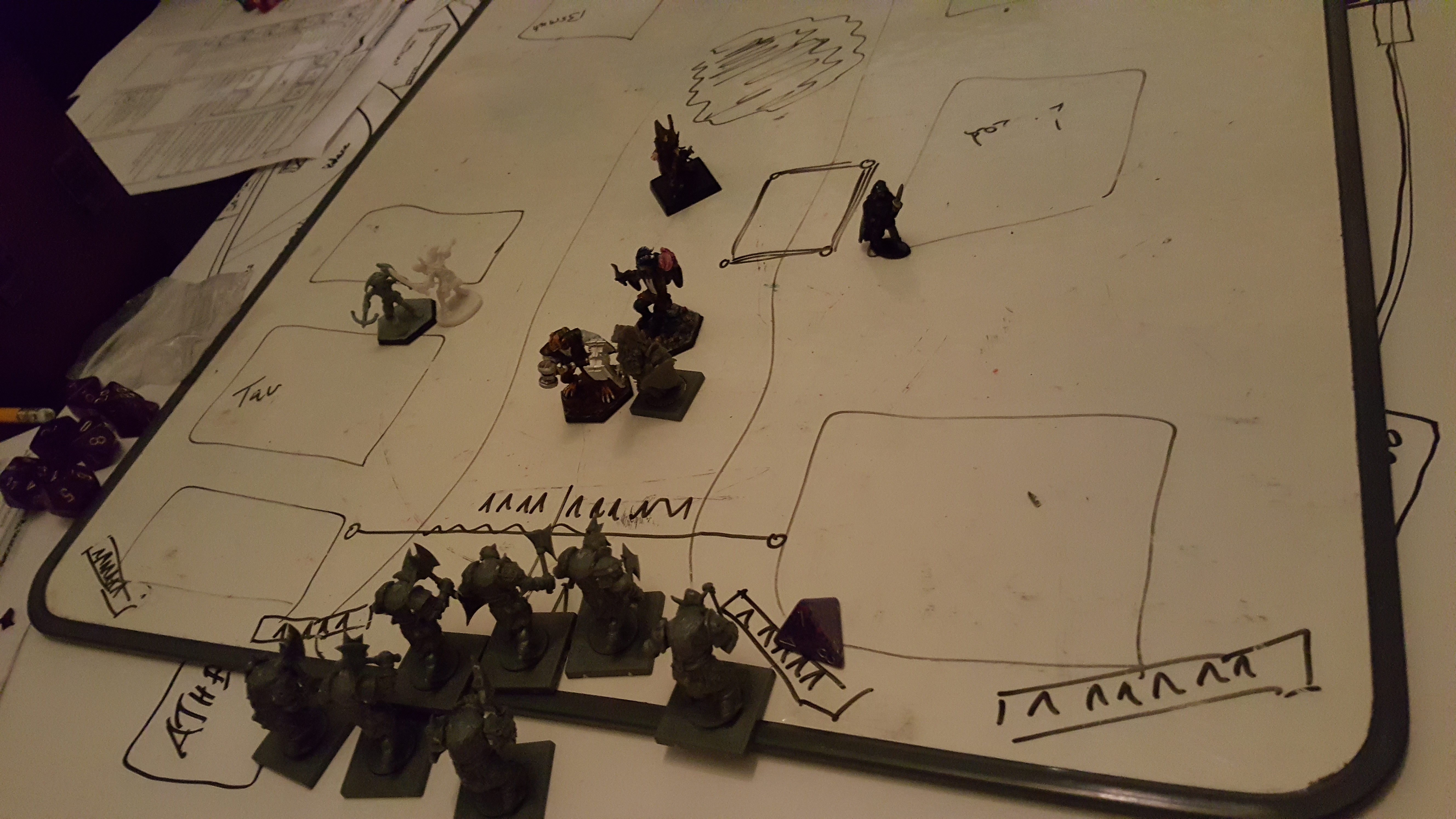 Hello again and welcome to you.  On today’s post I am sharing the next part of my DnD serial where I am playing a Drow Ranger.  For your ease and my memory, I have included a list of character names and players just below.  In our last encounter, Rhyll’Zt was summoned to the court of the High Lady of Strig and given a task of defending outlying villages from barbarians.  After making himself unpopular with the High Lady, a fairer deal was negotiated, and he stopped being stroppy and is now on task.  So, let us pick up where we left off.

We were allowed an hour to procure supplies.  I mainly wanted to increase my supply of throwing daggers, though I needed a pouch of ingredients as I found I now occasionally needed certain items when attempting some of my trained abilities.  I returned to the Palace within the allotted time to find Cassiea, Torrin and Nissa waiting with the weird bird thing.  A few minutes later Vuldin, the crazy dwarf in a spangly outfit (I can’t bring myself to call it “Armour”) rolled up on a cart pulled by horses.  In it there were lengths of rope, spikes, caltrops, ball bearings and various other trap making equipment.  Spangly outfit or no, given the apparent weak defences the village of Blue Oak had, Vuldin at least had the presence of mind to think fortification.

We travelled to Blue Oak.  Nissa Slept in the wagon, Torrin Ranged ahead, whilst Vuldin drove.  I rode on a horse supplied by the High Lady as did the Bird Thing, Cassiea and our Patron.

I learned the Bird Thing can only mimic sounds.  When I asked her name all I got was the sound of coins dropping onto a surface.  So we call her Clatter.  Cassiea was easier to talk to.  “How have you been?  Anything interesting happen in the last month?”

“Not really.  I went to a city.  I hate cities.  There are lots of people there.”

“They don’t like me.”  Of course.  She is a Tiefling and the races of this realm are notoriously bigotted.

“I understand.  People in Strig have often treated me poorly due to my heritage.  But they only ever do it once.”

I think she chuckled ever so slightly at that.  Further conversation was forestalled when my eye was drawn to the treeline.  There was a shape where there should not be a shape.  We were being observed.  I nudged our patron and discretely indicated where he should look.  He nodded ever so slightly and grunted.  “Were you expecting that?”

“Maybe,” he replied quietly.  The shape moved with alacrity and it was gone.  Noticing where we were looking, Casseia looked into the trees, saw the movement and began chanting and waving her hands.  We all felt a pulse of magic as she cast her spell, though I had already clambered off my horse by this point and ventured into the trees.

I found lots of sleeping rabbits and squirrels that had fallen from trees as a result of sleep.  And I found tracks.  I followed them but they disappeared very quickly, however I was able to discern that the observer was probably about human size, or perhaps a bit bigger.  The observer had run fast, or had been jumping from place to place.  Either way, they were gone.  I grabbed some sleeping rabbits, broke their necks and returned to the group.  At least the venture wasn’t a complete waste.

I relayed my findings to the patron, who didn’t seem at all surprised but was completely unhelpful in supplying anything remotely useful.  Bloody Wizards.  I prefer bloody wizards.

We arrived in Blue Oak by the evening.  Casseia decided to arrange lodgings with Nissa and Torrin at the Inn, whilst Vuldin, Clatter, our Patron and I sought out the headman of the village.  Village is almost overstating it.  A dirt track, a few shacks, the blacksmith’s house and the hall.  It barely warranted a hall.  As for defencibility, it didn’t look like it could keep the rain out, let alone a warband.

We entered the hall, to find the Headman dealing with some peasants, who he ushered away at our approach.

“Oh good, you’re here at last!”  The Headman directed his greeting at our patron.  “Are these your agents?”

He dragged the word “Agents” out for longer than necessary, as his mind tried to calculate whether or not the bird thing was a monster, if the drow was here to murder him, and what precisely the dwarf was thinking with his “Outfit”.

“These are indeed my agents.  We have reason to suspect an attack is imminent.  Most likely from the north”

“Do you have any strong men, or dwarves (male or female)?” Asked Vuldin.  “I believe I can shore up your defences.”

The Headman’s look at Vuldin was incredulous.  “We’re a farming village.  You don’t get feeble farmers.”

“Excellent, I point me to these farmers.”  The Headman directed a clerk to assist the Dwarf, who then left to enact whatever plan he had.

“The Dwarf looks foolish but he has brought items to fortify Blue Oak.  Your village is open to attack and as this guys says,” I said, nodding to our Patron, “an attack is imminent.  We have fought formidable foes, but there are few of us.  If the enemy has numbers they’ll be able to swarm right past.  Is there somewhere safe you can hide your people, and valuables.”

“We can squeeze everyone into the Blacksmith’s house.  It is the strongest building we have.  Why, what have these attackers done before?”

“They raid, they kill, they plunder.  There is no pattern to it,” said the Patron.  Something bothered me about that, but I couldn’t quite figure it out.

“Get anyone who can’t fight into the Blacksmith’s house,” I said.  “Everyone else is on watch tonight.  No exceptions.”

The Headman nodded resignedly.  We left, and were met by Casseia outside.  “Lodgings are arranged.”

I noticed that Vuldin already had a digging crew working to the North of the village and some other contraptions were being unloaded from the wagon.  I approached the dwarf.  “Leave them a small route in, a path of least resistance.”

Villagers and some of my comrades looked at me.  Vuldin nodded understanding.  I explained for the others.  “They’re getting in one way or another.  Might as well funnel them into a kill box.  Somewhere their numbers mean nothing.”

Vuldin agreed and left one muck path into the village, past the hall, open.  The rest, he fortified,  and there was some bizarre square roped off enclosure built in front of the Hall.  We looked askance at him and he simply replied, “Wait and see my friends…”

We ventured to the Inn, where we discovered we were all crammed into one room, apart from Casseia.  Given that I normally sleep in drains, this was no issue for me.  We settled in for the night.  Vuldin performed for his supper, whilst I traded the rabbits with the Innkeeper.  Half for me, cooked with ale and whatever else he had, the rest for him.

The hours dragged on, and the folks watching the Dwarf gradually drifted away to the stone shelter of the Blacksmith.  We each took watches through the night but it was entirely uneventful until dawn broke.  That was when we heard it; rhythmic marching of booted feet.

Vuldin happened to be on watch and sounded a wake up cry.  I should probably mention, his weapon of choice is an armoured, weighted metal gauntlet.  He clanged this against his shield, waking anyone asleep within a mile.  We hurried into the street.

We assembled on the street, Torrin and Vuldin at the front, with Nissa and Clatter taking positions to their right and behind them.  Casseia stationed herself to the left and behind, whilst I climbed atop the village hall to get a better vantage.  I could see all of Vuldin’s good work.  A thin rope suspended across the main road into the village.  Spikes were concealed and arrayed behind it, with further spike pits concealed left and right of the cord.  In the center of town, the industrious farmers had dug a pit and filled it with oil and flour.  Vuldin explained that the mixture gets on everything and makes gripping of anything difficult.  And it is flammable.

We then saw our enemy.  They approached in lines, very orderly for barbarians.  They marched in step, which was just as odd.  Vuldin began yelling challenges at them, attempting to insult their manhoods or their parentage.  They didn’t break ranks.  They didn’t speak, or make any other sound for that matter either.  Something was very strange here.

Nissa fired her bow striking one of the barbarians.  It hit but the barbarian advanced.  Torrin flung a javelin at the same target bringing it down.  Having successfully put half the forest to sleep on the previous day, Casseia tried her luck again, putting one of the attackers to sleep.  One of my daggers sailed from my perch into the chest of an attacker, but on he marched.  Clatter flung another blade impaling another with the same effect.  No one was gasping in pain, despite blooding spilling from mouth and wound; they marched silently.

The first line of attackers walked straight into the cord strung between buildings, and tried to continue walking, oblivious to it’s presence.  They ultimately failed, overbalanced and fell back, flailing on the ground, trying to find their feet as their comrades marched over them.  The second line knelt to get under the cord and walked face first into concealed spikes, pushed by the wave behind them.

“This is wrong.  They’re helpless,” said Torrin.  I will fight anyone who threatens me but I felt as unnerved as the Dragonborn.  We might as well have been murdering sleeping infants.  They made no sound, they demonstrate no intelligence, and failed to defend themselves.  It wasn’t a fight, it was slaughter.

Just as the first wave to reach Vuldin actually got into range of his metal fist a large armoured warrior moved through the ranks.

“Vorn, what are you doing here?” asked our bewildered Patron.

The figure gestured at our patron and roots shot out from the ground and grasped him, dragging him down.

He struggled mightily but ineffectively.  “I will never give it to you.”

“As you wish.  Then I will make all suffer and I will allow you to witness before I permit you to die.  Unless you change your mind.”

He turned to leave and was struck by a bolt of energy from the sky.  Casseia looked satisfied with the hit until the smoke cleared and he remained unscathed.  “Very amusing, Tiefling.  That tickled slightly.  I look forward to our next encounter.”

The warrior left, taking his shambling horde with him.

Torrin and the villagers set to freeing the patron with whatever axes they could find.  Vuldin dragged the sleeping barbarian into his roped enclosure and began brawling with the slumbering form, grabbing the shoulders of the barbarian and lifting him with such speed and power, the barbarian was momentarily balanced vertically above the dwarf, head to head and his feet pointing up.  And then then dwarf fell back, bringing the barbarian crashing down.  He didn’t even whimper.

Whilst the dwarf played with the barbarian (interrogation no longer seemed like the goal), our patron stood up.  “This is worse than I thought.”