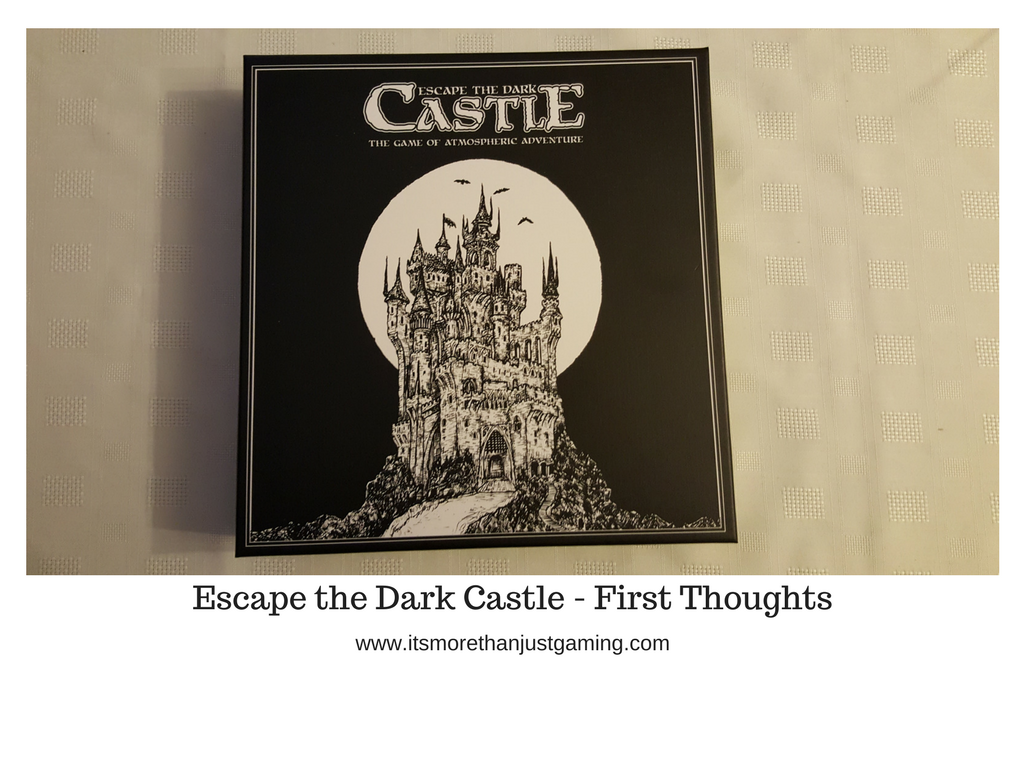 The Game is for 1 to 4 players, each player taking the role of a person who has been imprisoned in the Dark Castle for years.  They get a cool player card with their character on it, and their Wisdom, Cunning and Might scores carved on the prison walls like a prisoner might do to keep track of time.  (I thought this was a nice touch).  I played the Abbot, who was good with wisdom, average at might and rubbish with cunning.

A castle deck is built up by dealing 15 random chapter cards, each with lovely artwork on it, in a pile face down, with a boss card at the bottom and the dungeon start card at the top.  The group starts with one item per player, and must attempt to resolve the challenges on the 15 chapter cards to escape the Dark Castle.  Unfortunately, it is an all or nothing thing.  You all get out or none of you do.

Each turn, players flip a chapter card and read the flavour text and then follow the instructions.  Quite a lot of the encounters are combat or traps, as you might expect.

There are effects that are limited to only the person who opened the door (such as fear in one case, or an attack of opportunity against the monster in another), and often when you defeat a challenge you get to draw items as rewards.

Be aware, this isn’t Dungeons & Dragons.  You aren’t playing heroes and you aren’t going to be finding much in the way of magical items (there is one Golden Axe, which we looted on our first draw in the first game – I suspect shuffling or lack of to be responsible), but you will find some useful things that will tip the odds just a little bit towards you.

Combat is pretty straightforward.  Each monster has a row of symbols on it that correspond to the player’s skills.  These symbols are at the bottom of the chapter card and can be considered the monster’s “Hit dice”.  So, for each symbol on the card, a chapter die is added to the Monster’s Hit dice.  And then, the players roll their character die.  For each symbol that a player rolls that matches a monster die, they can remove it

In the above example we have two players, the Abbot and Smith.  They are facing cultists that have strength 1 Cunning (Eye), 1 Wisdom (Star) plus 1 die per player (the symbol that looks a bit like a meeple), which equates to another wisdom and a might (Fist).  The Abbot rolls well, double wisdom which is enough to remove both Wisdom tokens, and the border round the outside indicates he has also blocked.  The cultists two wisdom dice are removed.  The Smith rolls a cunning symbol which he can use to remove the cultists’ cunning die.  However, the Cultists still have one die left, their might die which no one managed to remove so they deal two damage (bottom right of the card).  The Abbot rolled well and got a double, which counts as a block so he is fine.  The Smith was less fortunate and takes two damage.  The next round of combat begins and hopefully one of the players will roll might as all they need is one might to win.

And that is it, it is a very simple game.  Each turn one of the players opens a door and reads out the flavour and then the encounter begins.  If you get to the end of the dungeon, you can fight the boss.  Do that, and you escape the Dark Castle.

We played this game twice.  The first time we were learning the game, and were brutally beaten as we only figured things out as we played, and usually too late.  The second time we were a much slicker operation.  We knew exactly who we wanted to open each door, and we remembered we could rest more frequently to recover our waning hitpoints.  Unfortunately, the game itself is unforgiving.  I went from being the character who had the lowest hitpoints (5) in one round to being the character with the highest (still 5 which gives you an idea of how badly we did on that previous round) on the very next round.  And then we got jumped by a giant monstrous spider which scuttled out of the dark and killed us all.

As yet, two attempts in we are yet to escape the Dark Castle.  But we’ll keep trying.  And as soon as we do that, I am sure we will add in the expansion which no doubt makes things even more horrifying.