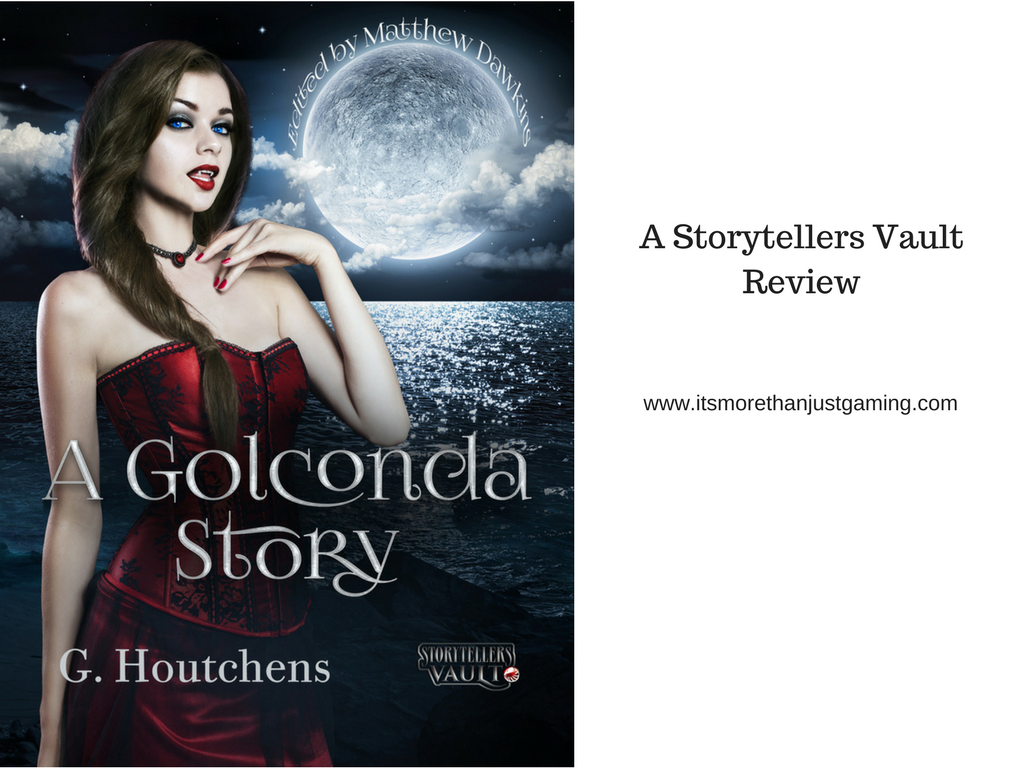 Hello everyone, welcome.  Today I am doing another review for the Storytellers Vault (click on the link if you don’t know what that is).  This time round I am reviewing a piece of fiction related to the game, Vampire: The Masquerade called A Golconda Story.  This book was written by Glenn Houtchens, and I was provided with a free copy for review purposes.  I will link to A Golconda Story at the end of my review, and the link will have an affiliate tag embedded, meaning that if you purchase anything after clicking the link, I get a small commission.  If you do not wish to do that you can click on the following link to the Storytellers Vault Website which has no embedded tags.

Now that the official stuff is done, on to the nuts and bolts.

Patty Heron is a journalist who, in pursuit of a story, stumbles onto a hidden world where human life is cheap, or controlled by shadowy powerful individuals.  Little does she realise that this is only the beginning, and very quickly she is pulled in and embraced by the world on the other side of the curtain.  And I do mean that literally.

A Golconda Story follows Patty as a mortal uncovering strange goings on, and then as a Neonate Vampire learning the hard way that in a world of Vampires, age and status matters more than anything else.  Patty has to come to terms with her own beliefs which are now contradicting her current existence, whilst simultaneously trying (and failing miserably and frequently) to not screw up in social interactions with her elders.  Along the way she encounters a wide variety of Vampires from the World of Darkness line of games, as well as a few of the game signature characters.  She must also wrestle her own conscience in terms of her only real friend with a beating heart who is not only her thrall (technical term ‘Ghoul’) but who is placed frequently in danger by association with her.

And, as you probably will have guessed, this story is ultimately about Golconda – a state of salvation for the damned.

Patty’s story is quite an interesting one.  If hardship and overcoming obstacles are the meat of a story, then this one has enough to feed many.  Patty is challenged at almost every turn.  Though she does get the upper hand once or twice.

The portrayed relationship between a vampire attempting to maintain humanity and an enthralled ghoul, Amalthea – the friend with a beating heart, is great.  For folks running games out their it certainly raises some moral questions about Vampires and retainers, even when they are not used as cannon fodder or death squads.

Patty seeks salvation from her existence as a vampire, seeks Golconda, and this is portrayed quite well in various scenes where she chooses a much more costly option in the face of public scrutiny and humiliation at the hands and tongues of her elders.

In terms of inspiration for playing Vampire: The Masquerade the pomp and ceremony in the European courts, particularly compared to US courts was a useful visual.

From the perspective of a player and GM of the game, it was interesting to see other perspectives on how the World of Darkness runs.

The resolution to Patty and Amalthea’s story was fantastic.

Particularly in the early part of the story, before Patty becomes a vampire, there is just little bit too much coincidence for my liking.

There were a couple of instances, again early on, of technical things that were a bit jarring.  The pacing sometimes felt a bit off, with certain things happening too quickly, with not enough buildup.  There were parts of the story that would have benefited from a bit more research.

Whilst Patty was an interesting character with an interesting story, the other characters were weaker.  The Elder Vampires seemed just a bit too petty.  They had the right amount of spite, but I would have wanted them to be just a little bit more dignified.

The plot moves around quite a bit and as a result there are a lot of characters, which is potentially a factor in them being a bit weaker.  A Dramatis Personae is provided in each section, which in itself was helpful.  However I felt it was unnecessary to include descriptions of the characters in this Dramatis Personae.

A Golconda Story is by no means a perfect piece of polished prose, however it is an entertaining read.  If you are looking for inspiration in running a Golconda Chronicle with players, there is perhaps some inspiration for physical hurdles that players will need to overcome to maintain a high humanity.

If you are between books right now and enjoy (or are interested in) the World of Darkness, the A Golconda Story might just be for you.