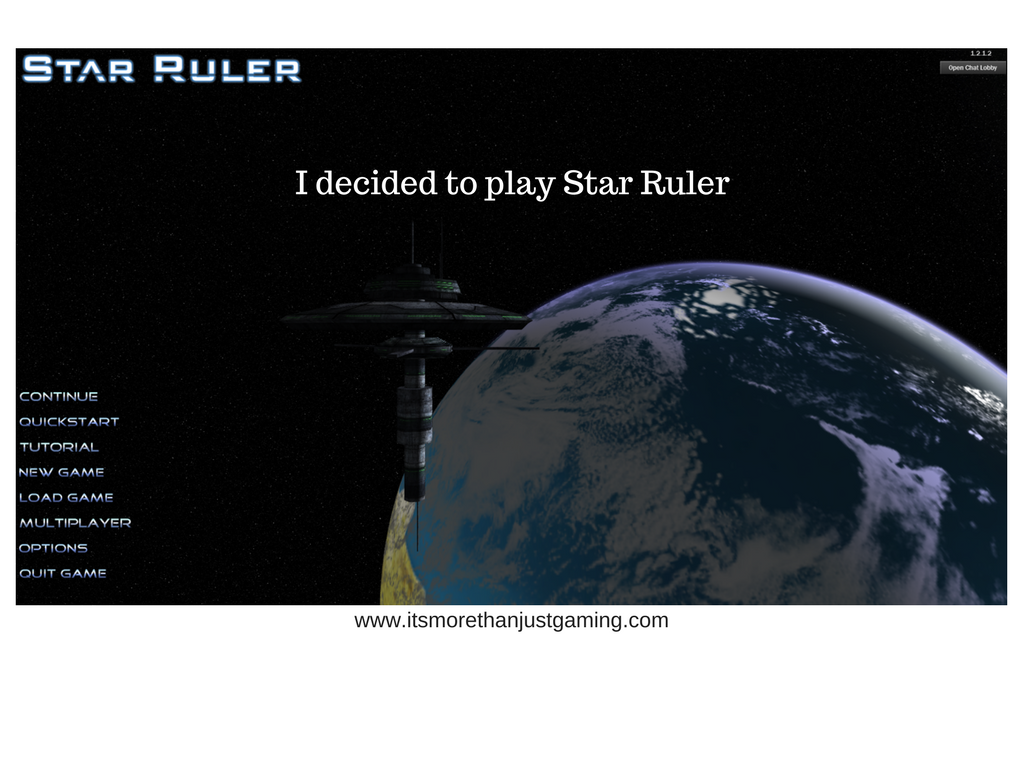 Hi everyone, welcome.  In today’s post I am going to be talking about a videogame I enjoy immensely, Star Ruler.  Star Ruler is a 4X space empire simulator (4X means explore, expand, exploit, exterminate) where players start with one or two planets in their home system, and over time the colonise other worlds, develop trade routes between their planets to support infrastructure, advance their science to allow construction of better planetary facilities and starships and then eventually conquer the galaxy.  I suppose you don’t have to conquer the galaxy, but why wouldn’t you?  Anyway, I will be going through some of the features of Star Ruler on this post so you can share my enjoyment.  I would say I started doing a let’s play of this game, however when I went back to watch the videos certain things didn’t record properly, some of the menus within the game didn’t appear on the recording and that sort of broke the flow of the videos.  Which is unfortunate.  Not sure what caused that, but such is life.

So, I am a huge fan of empire builder games, and Star Ruler ranks prettyl highly, despite the fact it looks pretty basic.  There is very little in the way of variety between starships and space stations.  They all basically look the same, though ships are horizontal and space stations are vertical.  However, this really doesn’t matter to me at all.  As it is the things you do, and not what they look like that is fun to me.  I will now go through my favourite bits.

OK, so the first thing to consider in this game is there is really no upper limit.  You can create a galaxy with a million star systems if you wanted.  You could seed it with a thousand alien races if you wanted.  And you can do it as a 3D or a flat map, your choice.  The only real limit is how much your computer can handle.  I suspect mine would look at 1000000 star systems and commit seppuku.  I tend to favour smaller number of systems with a fair number of opponents.  This means you do have room to expand, but it won’t take you forever to do it.  It is also less of a pain to manage 100 star systems than 1000.  It is possible, I guess to manage 1000 systems, as it will take you a while to build to that and you can decrease game speed.  Still, 150 was about the right size for a fun game.

Scale is also applicable to ships.  Your basic starting ships are between 5 and 12 for your starting cruisers and dreadnoughts.  I tend to build my basic defence frigate at Scale 25.  Heavy Cruisers are going to be 100 to 250.  I have even built ships over scale 1000.  You can in fact build ships and space stations bigger than stars.  (you can also blow stars up, should you wish)

Given that you are likely to managing dozens of planets, even in a small game, you really do not want to be building every single structure.  And, as your tech advances, structures upgrade to better, more efficient, versions.  Fortunately, you don’t have to micro-manage this.  Once planets are colonised you can set an automatic governor to a planet type/priority and that governor will construct buildings according to that principle.  So, a Balanced world (Default) will have a mix of raw material/advanced construction, trade goods, Ship construction, population density and research.  A research planet will prioritise labs and just enough housing and food to support.

I tend to colonise using basic Governors early on when I first enter a system, making my second world an economic one to add raw materials, electronics and advanced components to the communal pool available for construction.  I then add in research worlds, farm worlds and luxury worlds.

As the game advances I go system by system turning off governors and demolishing some buildings to replace with others (usually shield and weapon emplacements and shipyards).  I then set the governor to Upgrade only.  At that point, I know the system doesn’t need my attention unless it is attacked.

Advancing research is one of the most fun elements of Strategy games.  However, in Star Ruler there is no fanfare with research.  There is a grid with available tech and you simply click on one and watch it advance to the next level.  There are also undiscovered technologies that you discover by playing hunches, which is interesting an stressful at the same time.

Each technology can, theoretically, level up infinite times.  And buildings attached to that technology level up when a new tech level is reached.  So, general science governs labs.  You start with Level 1 labs that put out X level of research.  If you get General Science to level 2, your labs are now built at level 2, and existing labs will upgrade to level 2.  General Science 3 allows level 3 labs and so on.  Metallurgy does the same for metal mining facilities.  And so on. The only thing, each increase in level requires twice as much science as the preceding level.  So, you probably want to keep the advancements balanced.

However, upgraded/new buildings are not the only benefit of research.  Some technologies at certain levels and/or in conjunction with other technologies create new systems for starships and space stations.  This takes the form of better engines, weapons and shields, power supply or even infrastructure.  One of my early priorities is being able to build orbital factories that produce all the electronics and advanced components I need, to free up room on the planet surface.

Something I have loved in 4X games since Alpha Centauri is the ability to modify ship design.  I touched on this a moment ago in the research section as I design a lot of satelites and space stations.  Ships all look the same in this game, and when you design them you have an design area with a 14 to 16 units of area to assign subsystems.  Larger engines mean more thrust, but require more power and fuel.  More power means more control is required, either a crew, a computer or mix of both.  A crew requires quarters and life support and so on and so on.  In fact it is sometimes hard to build ships and still have room for weapons.  This is a challenge.  However, as tech level gets higher, subsystems get more efficient, and then warships and the like are suddenly viable.

I really enjoy designing my ships.  I like getting the balance between speed, defence and firepower right so that when the enemies innevitably come, I can face them with reasonable chance of victory.  Automated Ship production in my home systems doesn’t hurt either.

Various ships are equipped with items that do certain jobs.  So, I often build ships with mining lasers in systems with lots of asteroids.  I can automate those ships to mine asteroids and then dump their cargo on a planet or station or other ship when they are nearly full.  Salvage ships can patrol a system looking for wrecks.  Repair ships can orbit a planet until after a battle when repairs are needed and they will launch and get on with repairs.  These are all things you an automate in the ship design feature.  That is fantastic.

Here is one better.  I often build large space fortresses in my systems to defend them.  They orbit planets and they have shields and guns.  That isn’t amazing.  It is useful, but not amazing.  What is amazing is these space fortresses can be built with Ship Hangar Bays (Ships can also have hangars).  I can then design a type of strike craft small enough for their hangar.  I then include in the fortress design this detail – default strike craft is A.  I can then tell it to auto replenish strike craft.  So, imagine I build a scale 250 or even 500 space fortress.  It might have ship hangars with space 150.  I design a strike craft with scale 5.  A torpedo bomber.  I program the torpedo bomber to land on stations when there are no enemies present, and to launch when there are.  I include the Torpedo Bomber in the fortress design and automate to replenish losses.  I then build the fortress from the design.  The fortress is built and it notices it is empty (You can build it with a full compliment, but I don’t recommend it.  It is more efficient to build it empty).  It has Ship Bay scale 150 which is room for 30*Scale 5 Torpedo Bomber.  The automation kicks in and it tells nearby shipyards “Build me torpedo bombers.”  And they do.  These strike craft then fly to the space fortress and wait.  When the system is attacked, they launch and attack the invaders.  (In the above images, the triangles are my torpedo bombers flying out to intercept the Yellow Capital Ship)If they are shot down, replacements are immediately called for.

If the system is attacked by a capital ship force of 20 odd scale 50 ships, one fortress wont do it.  even with repairs.  However, it might just buy you time to get a fleet in system.  Plus, with the help of other orbital defences, maybe your 30 bombers will make a dent.  And, there is no limit to the number of fortresses you can build or to the scale of the strike craft.  Theoretically, build a big enough fortress and you could house 30 * scale 25 defence frigates.  An expensive proposition to be sure.  But it is a glorious moment when the computer decides to invade and the fleet you had riding at anchor launches.  And so long as the fortress exists, it will always replenish losses meaning you can fight your intergalactic war along a steadily increasing front without having to constantly worry about every star system.  Some star systems will sort themselves out.

And that is Star Ruler.  If it sounds like a fun game, please do come and join me on my lets play and comment on a video or comment here.  I’d love to hear from you!