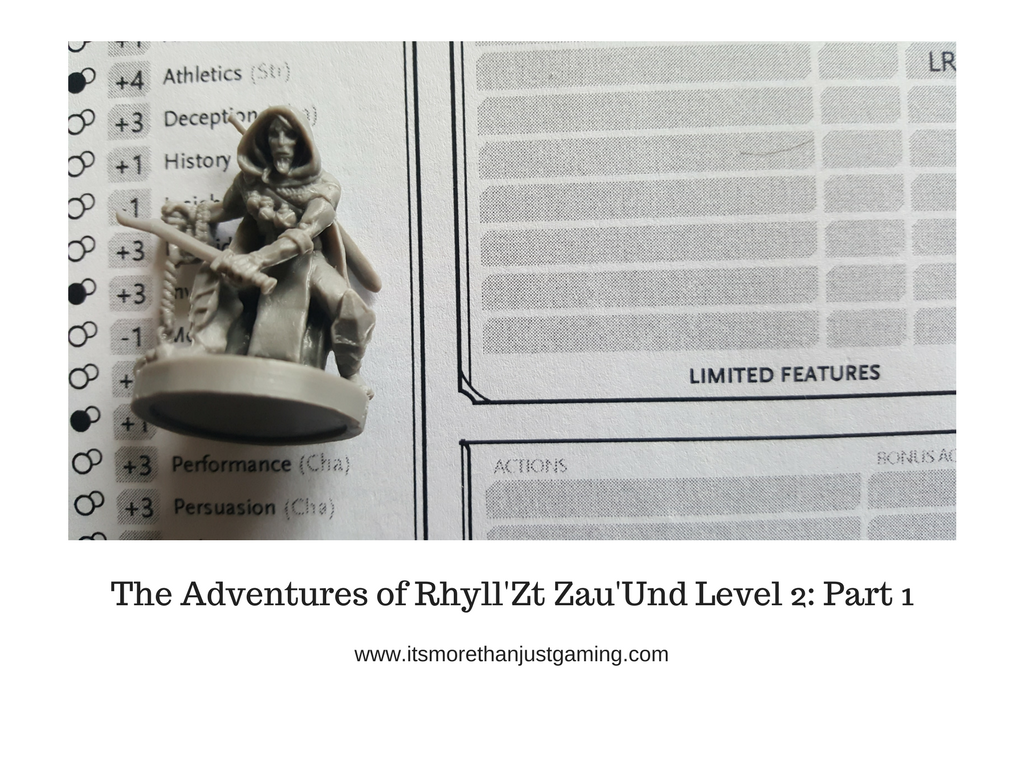 Hello everyone, welcome!  Regulars will be aware that I recently played a short DnD Adventure as a Drow Ranger named Rhyll’Zt Zau’Und (Translates to Moon Hunter of the Children of the Spider’s Kiss).  We thoroughly enjoyed this game, appreciating it all the more for the fact that our GM, Chris, was a first time GM (and bluntly, we are an awkward group for spoiling evil villain plans…).  You can have a look at our previous exploits on my post The Adventures of Rhyll’Zt Zau’Und – A Dungeons & Dragons Adventure .  I also did an interview with Chris to find out about his experience as a first time GM which you can read on An Interview with Chris: The Thoughts of a First Time Dungeon Master  Chris very kindly agreed to run another adventure for us, for which I was quite happy about as I quite like my ranger.  And before you ask, he is not a Drizzt clone.  My character is an urban ranger, whose ranged weapon is daggers and his combat specialty (now that he is level 2) is dueling.  ( I can now also cast spells, namely fog cloud and jump – which I will no doubt be used to hilarious effect).  As I was rubbish at using names in the last account I am going to share player first names and character names and also if they were in the last adventure.

So, onto the story.

It’s been a month since we underwent the task that bloody wizard set us in his village plaything.  I understand Nanoc remains there training the villagers as he deemed them “Weak and Pathetic”.  I have not returned.  No need to. No desire to.  Our group drifted apart as was inevitable.  Pretty sure I saw Nyssa chatting to some of the store owners on the street of crafters here in Strig.  Also sure they were burgled not long after.  Torrin went off on some barbarian rite or quest, and probably spent the last month drenched in ale, blood or crap.  Cassiea, sort of vanished.  I guess she is used to hiding, the folks hereabouts are unforgiving of Tieflings.  They are unforgiving of the lone Drow in the city.  But they are smart enough to give me a wide berth.  And I am smart enough to never sleep in the same place two nights in a row.

Outside the city, strange things were happening to the lands.  Trees were succumbing to decay whilst others flourished or appeared overnight.  The landscape was changing, and it was a bit unnerving.  But that seemed like a problem for a druid or a wizard to sort.  Chance would be a fine thing.

Then I felt that damnable summons again.  I had just finished a job for a local bookkeeper, bringing a delinquent debtor back to repay his debts (I left before the “Transaction” started, but I suspect it was extracted in blood rather than coin.  I don’t care, I got paid) when I felt a tug on my concentration.  I ignored it and naturally it became more insistent.  Figuring it wasn’t going to go away, I followed it.  It lead to the Palace in Strig, home of the High Lady.  The guards, such as they were, didn’t even bat an eyelid when I approached.  Apparently I was expected.  The throne room was as opulent as you might expect, raised dais, throne, columns holding up the ceiling in a room that is too big for the walls to do the job.  The High Lady sat on her throne, an elderly woman with hair white as mine.  Her personal guard, an exceptionally tall human with dark skin stood behind her.  In front of her I could see Cassiea, Nissa and Torrin.  The blasted wizard was there as well as a bird thing, and a dwarf.  The Dwarf looked ridiculous wearing some form of shiny colourful material stretched taught over his face and the rest of his frame.

Glancing around I said, “We appear to be missing the fool.”

He took a deep bow and pranced around some more.  “I stand corrected.  What am I doing here?”

The second half, I addressed to the High Lady.  I don’t have any love or hatred for the ruler of my home.  She has never been in favour of flogging the Drow from the city, nor has she stepped in to prevent the private enterprises from having a go.

“You are here, because I have need of the services of a competent group.  And my associate here tells me you passed his test.”

“You mean the ordeal where we were forced to fight against a plant monster, with the threat of so called ‘Dire Consequences’ should we fail?” said Cassiea.  “Yeah.  I don’t have many fond memories of that.  I do remember villagers having to dig holes for us…”

The Wizard, dressed appropriately in dark robes became animated, “Do you have any idea how long it took me to break that digging enchantment you lot put on those villagers?”

“I didn’t really care to be honest,” said Cassiea who then turned to me, “What about you?”

“Perhaps we can come back to the point?”  The High Lady phrased her statement as a suggestion, however there was no mistaking the command.  And that body guard of hers, well, maybe he was for show.  Or maybe he’d take a little bit of beating.   Cassiea and I quietened down and let her speak.

“Good.  Unfortunately we do need your services,” her glance at us implied what she thought of that, “as there is a new threat.  Many of the outlying villages have been attacked by marauders.”

“So, why not send the guard?”  I asked.  I work for anyone but given how badly we got screwed by the wizard last time, I was a tad reluctant.

“Oh.  And what part does he have in it?” I pointed at the Wizard.

“Let us just say that a threat is rising and I have my suspicions about it.  I am here to do what I can.”

I can at least respect that, a little bit.  “Ok, you say there is a threat.  You have suspicions and you’re willing to do something about it.  Fair enough.  What is in it for us?”

The High Lady responded.  “You cannot have failed to notice the changing landscape?  Your friend here believes the two things are related.  If that is true, then we are all in danger.  I would think self interest would motivate you.”

“Self interest motivates me to leave your city and never come back.  You’ll need to do better than that.”

She didn’t like that and I got the distinct impression I may be making an enemy here.  What is one more?  The bodyguard, previously impassive now had his attention on the upstart Drow.  Torrin shuffled uncomfortably, whilst Cassiea and Nyssa waited.  My hand instinctively reached for one of my daggers, which caused Nyssa’s eyes to widen.  Fortunately, the wizard broke the silence, to the relief of everyone.

“Help on this venture and you will have access to magical items.  I am sure some remuneration,” he glanced at the High Lady, “in advance can be arranged to cover expenses.  Does that sound reasonable?”

“I have learned that the village of Blue Oak will shortly be attacked.  We must move to defend it.”

“Perhaps we can fortify it?”  This was the Dwarf, Vuldin.  “Give me some materials and some strong men, or better yet Dwarves (male or female) and we can fortify the village for you.”

***Just a quick out of character digression here –  I may have interrupted the flow of the game at this point by suggesting that we would need a Bard if we wanted to do a fortification montage.  Pete started singing an adapted version of the Montage song from Team America, and I nearly keeled over with laughter.  Back to the game.***

“There is no time for that.  I believe the attack is imminent.”

“I presume we can be provided with mounts and a cart for supplies?  Given the immediacy?”

The High Lady glared at me once again, but forced a smile.  “Yes.  Will you need anything else?”

I glanced at everyone else, who were keeping quiet.  “Looks like we are good.”

“My steward will provide you with funds for expenses.  Go, buy your supplies and be here in one hour, or I will assume you have reneged and stolen from me and act accordingly.”

She seems to mean business.  Maybe I should seek employment from her in the future.  We departed to procure supplies.