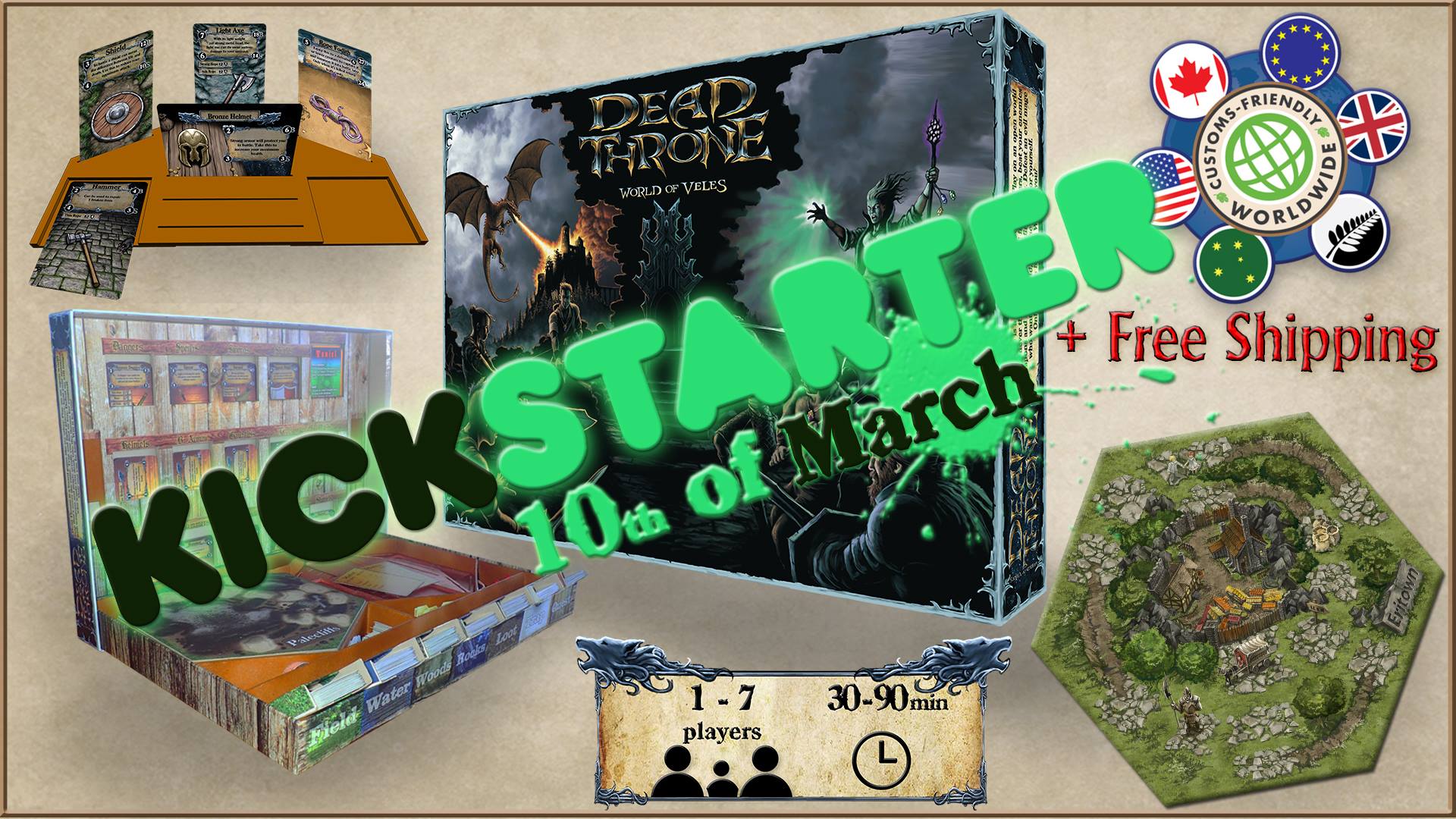 Hello everyone, welcome.  Today I am doing a bit of promotion for the folks at Sharkee Games that I met last year at the UK Games Expo; they are the folks who are making the game Dead Throne, which is went live on Kickstarter 10th March.  Dead Throne is a fantasy open world campaign game where players take on the roles of one of the citizens of Lirennor, each of whom have been gifted with power from the deceased King’s Queen.  The players are all that stands between the dead King’s Brother, Saladar, and a throne that has sat empty, protected by powerful magic for 100 years.  The Dead Throne.

Before I go on any further, I should inform readers that Sharkee Games have paid me to write this post, however the written content is my own and reflects my views.  The images are from the Dead Throne Website, Social media and Kickstarter holding page.  Now that’s out of the way with…

First of all, doesn’t that box art look really fun?  The Evil Saladar brings menace in the top right, the Dragon Agrimor scorching stuff to the left, and some portraits of the characters all looking at the vacant throne.

Speaking of quality artwork, the game is played over a map made up from 10 double-sided tiles, two of which you can see here.  Regular readers know that I like stuff that I can use in RPGs as well as the game it came with.  I could definitely see myself or one of my GMs using these for a Dungeons & Dragons game that uses miniatures.  And, as a fan of maps, nestled in books or being made up for the next RPG Adventure, I loved the map of Veles.  It will be available as a free Download from the Kickstarter page and would make a nice piece of wall art for your fantasy cave.

The game had a number of really cool features that caught my attention.  The fact that there is a mechanic in place for 4+ players is remarkably foresighted in a games designer, as games can slow down when the numbers increase.  I also quite liked the inventory trays, though they appear to be a stretch goal (I will speak briefly on them shortly).  The Mechanical Market was the big thing for me.  I have plenty of fantasy games, I love them, however the Mechanical Market is something I have never seen before in an off the shelf board game.  Items for sale from the in-game market have their own little sleeves in the lid that can close to prevent them falling out.  Actually, let’s broaden this out to organisation.

Some of my favourite games are also some of the most annoying ones in terms of organisation.  Why does that matter?  Setup and takedown time.  Again, it looks like the folks at Sharkee Games have built a game with gamers in mind.  The box looks pretty well organised and sorted, which will hopefully require minimal time to prepare a game or tidy it away at the end of the night.  That is something I really appreciate, and I know others will too.  (Though until they play Twilight Imperium or Arkham Horror, they might not have felt the sting as badly as I…)

And what would a fantasy game be without monsters?  Certainly the players will have plenty to worry about with Saladar trying to catch them, however they may also encounter local monsters that they must fight.  Each monster has a card with unique artwork and will sometimes have some history of Veles just to help build the lore and story.

I don’t have much more to say at this point. I think this game looks like it could be a lot of fun. Certainly, from speaking to the folks at Sharkee Games, a lot of passion and energy has gone into making this happen. And I should mention, this will not be their first time with Dead Throne at the feet of the great crowdfunding god that is Kickstarter. Dead Throne appeared last September and sadly did not achieve funding. I bring this to your attention for two reasons. Firstly, persistence is admirable. Secondly, one of the reasons (in my opinion) that Dead Throne didn’t fund was due to a quite a high target. The funding target this time is considerably more modest. There are a number of stretch goals, however they are enhancements to the core game that everyone who backs an appropriate pledge level will receive, for instance the player inventory trays, extra monster cards and so on. Something about that feels nice, the game gets better but doesn’t really change as more folk support it.
The campaign is now live and you can checkout the Dead Throne Kickstarter Page.