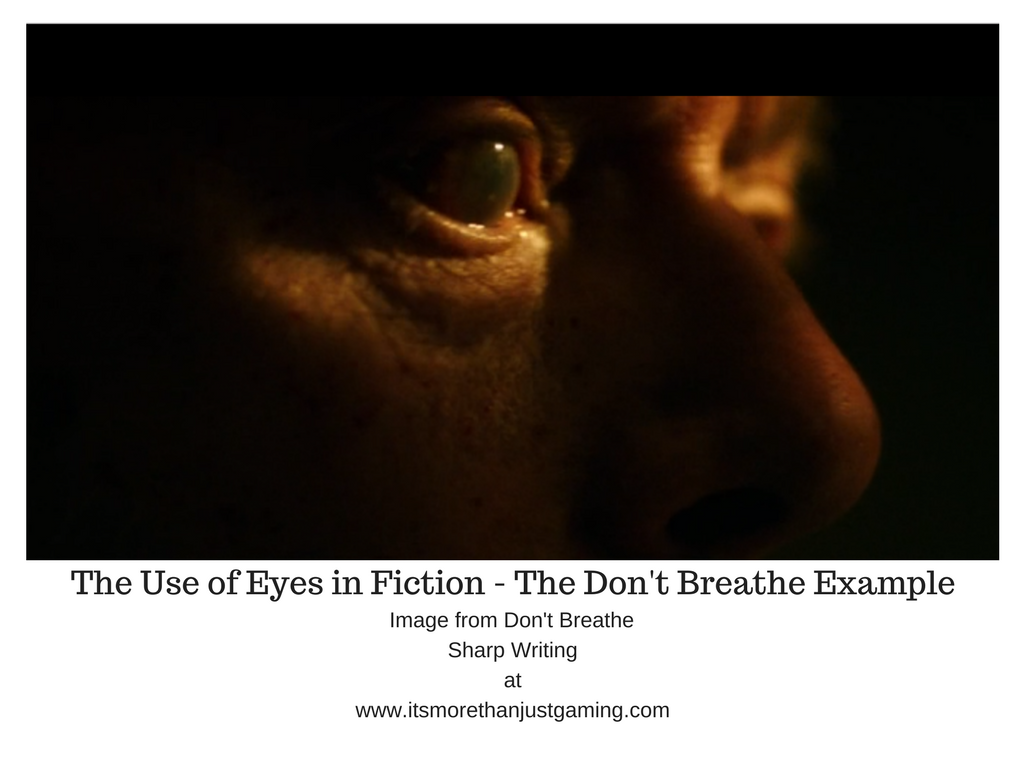 I recently spoke about a movie I have watched called Don’t Breathe.  This is a film about a bunch of kids/young adults who decide to rob a blind war veteran who they are aware has had a major payout as a result of personal tragedy.  The film is a thriller, as when the kids get into the house, they get more than they bargain for when the blind veteran locks them in, and begins hunting them.  I guess he was supposed to be the villain but all my sympathy was with him, until the writers did something to make me lose sympathy for him (It was like reading Volpone all over again).  It’s a decent movie, with Stephen Lang playing the part of the blind veteran.  (The title image is cropped from the movie for the purposes of learning).

However, review is not my purpose here.  I am going to talk about one of the things that made Lang seem incredibly sinister.  His eyes.

I should preface this post by saying I am not an expert on the medical side of blindness, nor do I have experience of dealing with blindness or helping someone suffering blindness.  This post is not intended to upset anyone, however I have used some blunt comparisons.  Please consider I do this as part of a theoretical discussion about use of one element, eyes, in plot.

His character is no Daredevil.  He doesn’t have radar senses, he just has his hearing and combat training.  That makes him dangerous to the trespassers, but not sinister to the viewer.  However, his eyes help achieve that.  They are fixed ahead, and cloudy as you might expect.  And this doesn’t seem natural.

It is perfectly normal for us as humans, and for the characters we read/write/see to read the intent of another person by looking at their posture, their face, their eyes.  There is something alive about the eyes that communicates to us, and on some level it unnerves us when they are rigid.  I wanted to ponder that. I have, in recent posts talked about Automata.  I believe that rigid, cloudy, eyes add to the impression that an individual is automata.  By definition, automata gives the appearance of life, but not necessarily actual life.  If we read the eyes because they are alive then does it not follow that we interpret rigid eyes, automaton eyes, as dead?  Are we unnerved because we see someone apparently alive, going through the motions, but carrying something within them that makes us subconsciously think of death?  (I am curious about your thoughts on that)

Taking a slightly different perspective, if we read emotions from eyes because they are “Windows of/to the soul”, then rigid eyes are surely walls?  In one of the most basic methods of attempting to connect with another person, a barrier is erected.

And then we have the idea that a person who cannot see should be at a disadvantage to us.  What then are we supposed to feel if the impairment is no disadvantage at all?  (And in case I need to re-iterate the point I made at the start, this is not an attack on blindness, and I have abounding respect for someone deprived a sense but capable of functioning without it).  Do we make the assumption there is something we cannot see, or understand at play?  Something supernatural?  Something uncanny?  Or perhaps we think they are faking?  Perhaps we suddenly think they have lied.  Lied, to gain advantage?  What else might they be lying about?

Now to the point of this theorising.  How do we use this as writers?

The obvious answer is through the point of view character.  Then we must make a decision.  How does that character react?  Their reaction will plant ideas in the minds of our readers, it helps us set the terms, language and ultimately genre of the plot.

Do we use the life and death metaphor?  If our story is supernatural or fantasy genre, then perhaps.  Discussion of life and death very much ticks the right box for supernatural, and rigid eyes might be the first step in your fantasy stories introducing Golems, or other such constructs.  Or perhaps even some form of curse where someone is brought under the control of another.

Do we use windows and walls?  Perhaps if we are dealing with a thriller, a foe that is unreadable even to our super-agent or our canny journalist can help the reader feel the frustration, and keep them guessing.

Or does the protagonist see their foe/antagonist, see their rigid/blind/milky/whatever eyes and wonder at how they are so capable?  They wonder if there is more going on, making the the antagonist’s blindness a form of blindness itself for the viewpoint character.  Perhaps as the protagonist tries learn to “See” in this new reality, we add mystery and hardship, helping the reader really feel the ordeal.

What do you think?  Comment below, and lets have a chat!

note – I have drawn some inspiration from this post reading Freud’s “The Uncanny“.  Worth a look if you are an aspirant of horror.