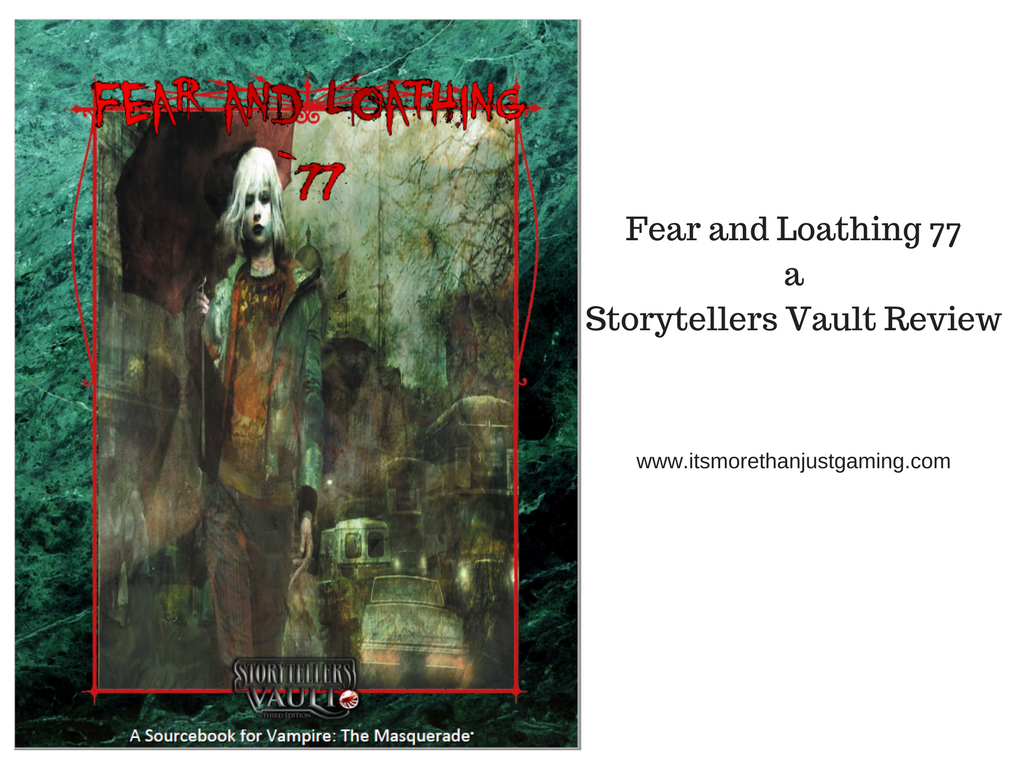 Hello everyone, welcome.  Today I am presenting a review for a World of Darkness community content for the game Vampire: The Masquerade called Fear and Loathing 77 by Brad C Hodson.  Fear and Loathing 77 is at its core a cinematic off the shelf adventure where players take the roles of a Sabbat Pack tasked with hunting down a spy.  I should say I was provided a copy for free by the author for review purposes.

It is 1977.  Your players take the roles of a Sabbat pack.  For those of you unfamiliar, the Sabbat is a sect of Vampires in the game Vampire: The Masquerade.    They are often cast as antagonist in a game of Vampire, however it is all a matter of perspective.  Certainly they tend to be more chaotic than their Camarilla (the other major sect) counterparts, but that does not make them (necessarily) evil.  They value their freedom from oppressive Elder Vampires and their bonds of brotherhood and loyalty.  At least at pack level, such loyalty reinforced by ritual.

Fear and Loathing 77 sees the players take the role of a pack on the West Coast of the United States, tasked with capturing a spy.  The players must chase this spy, deal with betrayal, ambush, politics and Intrigue as they travel between Los Angeles, Las Vegas and maybe even the Mexican Border.

This story is fantastic.  I read it all in one sitting and was blown away by it.  I liked the idea of the escaped spy, I liked the hazards that cropped up, and I liked the various opportunities there were to make the Tremere Clan (Camarilla practitioners of Blood Magic, called Warlocks) the bogeymen that monsters fear.

The book is very easy for a storyteller to follow.  I have never run a Sabbat game, being less familiar with the sect than I am with the Camarilla.  For that reason, I was a bit apprehensive about reading and reviewing this.  I needn’t have worried.  The book doesn’t assume massive knowledge and where appropriate suggests further reading.

A linear progression of story is provided, however branches and options are also provided so this off the shelf adventure can be used as a toolkit.

Some of the monstrous characters are provided with alternatives if some of their activities would be problematic to players.

Having read rulebooks for Vampire: The Masquerade since the 1990s, I recall reading the story inserts in the Players Guide to the Camarilla.  They were about a Nosferatu Sheriff, and his Prince, Prince Benedic.  As an avid player of Nosferatu I connected with this sheriff, Montrose, very quickly.  And I was very happy to see he makes an appearance in this story as a competent Camarilla Sheriff.  (Just on a side note, this appeals to me as it is nostalgic.  If you are a writer or Gamesmaster who is interested in using this as a tool, click the following link to a post I wrote entitled Pathos – The Ally of Writers )

The adversaries that the players will face were terrifying.  I cannot stress this enough.  Having read various scenes from a GM perspective, I know that if they were happening to my beloved character that I had laboured to create, I know they would create genuine fear and concern within me and I suspect this is true for any invested player.

I don’t have much to say here.

Some players may find some of the themes distressing as they are brutal and raw.  Storytellers should consider this when offering to run this game.

I sometimes feel that the power levels of the NPCs in various supplements, this one included, are a bit unbalanced.  I realise that this is based on how active/studious/industrious an NPC has been in their life, however I sometimes feel that there should be some consistent limits imposed.  I should note that whilst this bothers me a tiny bit, 1.) it is only a tiny bit and 2.) Fear and Loathing 77 is hardly unique in this imbalance, and in fact keeps good company with many other supplements.

I really enjoyed this story.  As I don’t run a Sabbat/West Coast USA chronicle I think I would struggle to get it into my current games, but that doesn’t mean I couldn’t at some point in the future.  There is a lot of useful information on some of the Prominent West Coast USA Kindred, and that can certainly work its way into any story set in The US.  This is a well put together starter adventure that can be done in a linear fashion should the storyteller wish, or it offers branches for more experienced players and GMs alike.  A worthy addition to the Storytellers Vault.

The next part of this post contains an affiliate link to Fear and Loathing 77.  This means that if you click the link and purchase anything on your visit to the Storytellers Vault, I will receive a small commission that helps keep this website running.

Fear and Loathing 77 is available at the Storytellers vault fo $4.99