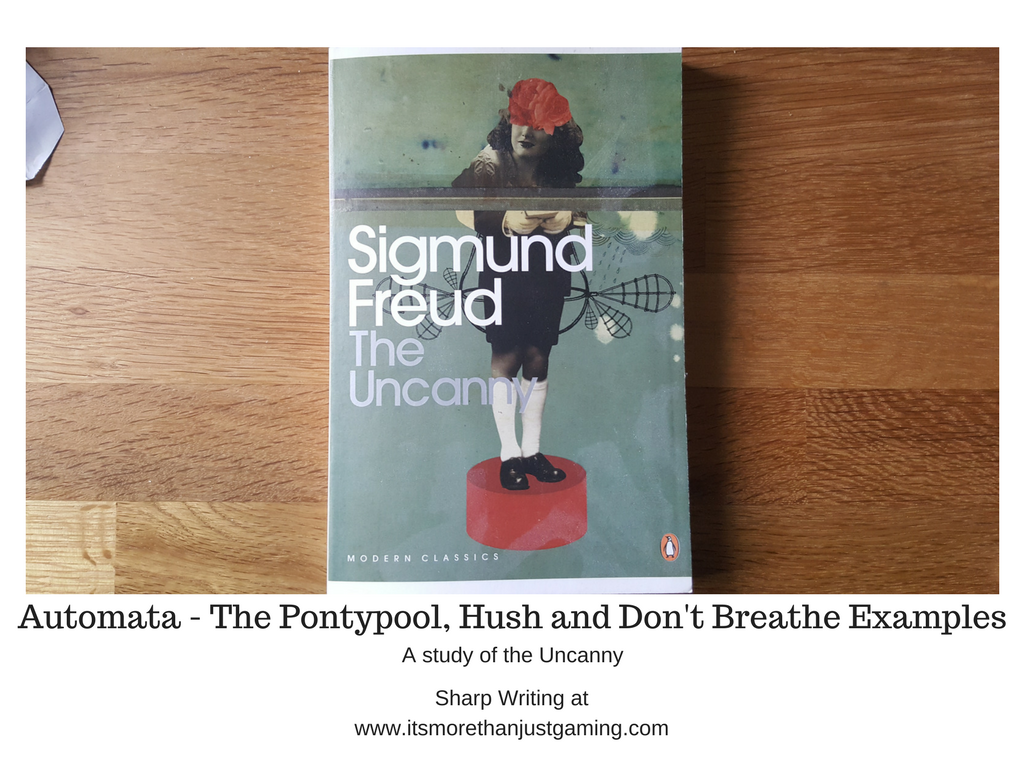 Hello everyone, welcome.  Today I am going to be talking about some horror movies I have recently watched, and relating them to lessons I have learned whilst studying the craft of writing.  I hope you find it useful.  I am specifically going to be talking about Hush, Don’t Breathe and Pontypool.  I am going to drift about on this post, and it is not intended to be exhaustive, and is purely opinion based on observation, and some learning.  The topic I am mostly interested in is Automata.  In this context, the semblance or appearance of life, but with certain things removed with the ultimate effect of dehumanising the automaton.

Hush was a standard slasher film, where an assailant with a white mask that made them look like a mannequin terrorises a deaf girl in her forest home.

Don’t Breathe is about a bunch of thieves breaking into the isolated home of a blind war veteran, trying to rob him, and getting more than they bargained for when he locks them in his house and starts hunting them.  (I guess he was meant to be the villain, and for much of the film, all my sympathy was with him)

Pontypool is a zombie movie, where the zombie infection is spread through infected words.  The action takes place inside the local radio station, the place uniquely suited to get word out about the new plague, but also risk communicating it.

I also studied the Uncanny whilst at University, if only for a short time and already had a few suppositions about what makes things scary.  I am going to go through each film, one by one and try to bring it together with previous studies to draw some form of a conclusion.

Currently available on netflix UK (at time of writing), and worth a watch.  If you want a review of it, you can find a good one over on Raistlin0903 Blog HERE (He does frequent movie reviews that I particularly enjoy, and often agree with – his review encouraged me to watch Hush).

So, we have a girl who is deaf living alone and in isolation.  First fear factor, without hearing she is deprived awareness of her surroundings except what is in her field of vision.  This effectively renders the intruder invisible to her, until he wants to be seen.  Dramatic irony is at play in the movie, as the viewer can absolutely see what the intruder is doing, but as he is out of the field of vision the heroine has no clue.  Initially.

We then add to this the fact that the intruder wears a paper mache style mask.  Concealment seems irrelevant, since his intent was always to murder her and anyone who gets in the way.  So, you have to assume the mask has a different function.  I will posit that the mask is rigid, and this was the point.  A flexible mask that moves when a person talks, or looks around still feels human up to a point.  A rigid mask looks more like a doll, or a mannequin.  Taken on its own, each aspect might slightly unnerve us but let us consider what putting them together means.  We have an intruder with a face that equates to a mannequin, and a girl who cannot hear.  In essence she is deprived of several stimuli that should scream human.  Humans have eyes, and faces and sounds.  But if something moves like a human, but doesn’t have a face and doesn’t make sound then we are getting into territory that Freud spoke about in The Uncanny.  We have something that resembles an automaton.  A being that mimics the form of human, and goes through the motions, but is absent defining characteristics.  I am going a bit deeper than the film perhaps intended (but maybe it did intend this discussion).  One thing I know.  Dolls are creepy.  The idea of a featureless, soundless being walking or moving in a similar fashion to a human is also creepy.  I think we can justify saying that Automota is one element that can be used in horror to unnerve, if not scare.

Don’t Breathe actually takes one idea of horror/thriller, the Intruder, and flips it as the protagonists are the intruders and would not have been in danger had they not broken into the house of the rich, blind, war vet played by Stephen Lang.  He has no particularly special powers.  He isn’t Daredevil with radar senses.  He is just a guy, a trained guy, but a guy nonetheless defending his house.  (There was a plot macguffin inserted to make you lose sympathy for him.  It kinda worked, I wasn’t keen on it.  But my purpose isn’t review).

Lang was blind.  His eyes, milky white.  And I think this is the most unnerving thing about him.  You can read intent in eyes.  If not emotion, you can see where eyes are looking and extrapolate intent.  But if they are solid, blank and unmoving then you get a similarly uncanny effect as with the solid mask in Hush.  Again, we have something taken slightly away from what we expect, moved in a direction that makes it less human and the result is Uncanny.

On a side note, I used this once in a roleplaying game where I had created a Wizard named Felix.  Felix lost his sight due to out of control sorcery, however I asked the Games Master if my character could start the game with eyes forged from silver.  They didn’t do anything other than see, but I wanted my character to have strange eyes.  The Games Master approved, and fortunately we have only encountered undead so far, so it hasn’t been a problem.

When seeing something resembling human, acting in ways that a human might but deprived of essential human elements, such as active eyes, facial expressions or a voice then we wonder what exactly we are seeing.  Is it a biomechanical engine?  Does it bleed?  Feel pain?  Feel Joy?

It unnerves us because we have no frame of reference.  How do you deal with a flesh construct?  A vicious animal, a deranged shooter, both are terrifying in their own right but we understand them somewhat.  They are familiar.  We know that they have emotions, and they have motives and in some respects we can try and evade or reason with them.  Don’t reason with a tiger.  They are notoriously hostile diplomats.

But we don’t understand the automaton.  Does it have will of its own?  Does it have a master.  How do we deal with it?  And there is also the fear that if one person can lose their humanity and become this automaton, then can this happen to us?  This uncanny, this sense of being unnerved perhaps stems from the fear that this loss of control, loss of choice and loss of everything that makes us human could happen to us?

I find that prospect more scary in many respects than the approach of a hoard.  How does one fight the loss of self?  How does one defeat something that feels no emotion or pain?

I would have liked to pose this article as a help guide for writers, but the truth is it turned out to be a starting point, a mess of thoughts splattered on this web page for you to consider.  I suppose there are lots of articles that tell you the top tips for writing.  Perhaps it isn’t a bad thing sometimes to pose an idea for storytelling and let it grow in you, the reader.

So, what are your thoughts?  Do you write horror, and if so, do you imagine you could use this as a stimulus?  Let’s have a chat.

2 thoughts on “Automata – The Pontypool, Hush and Don’t Breathe Examples”