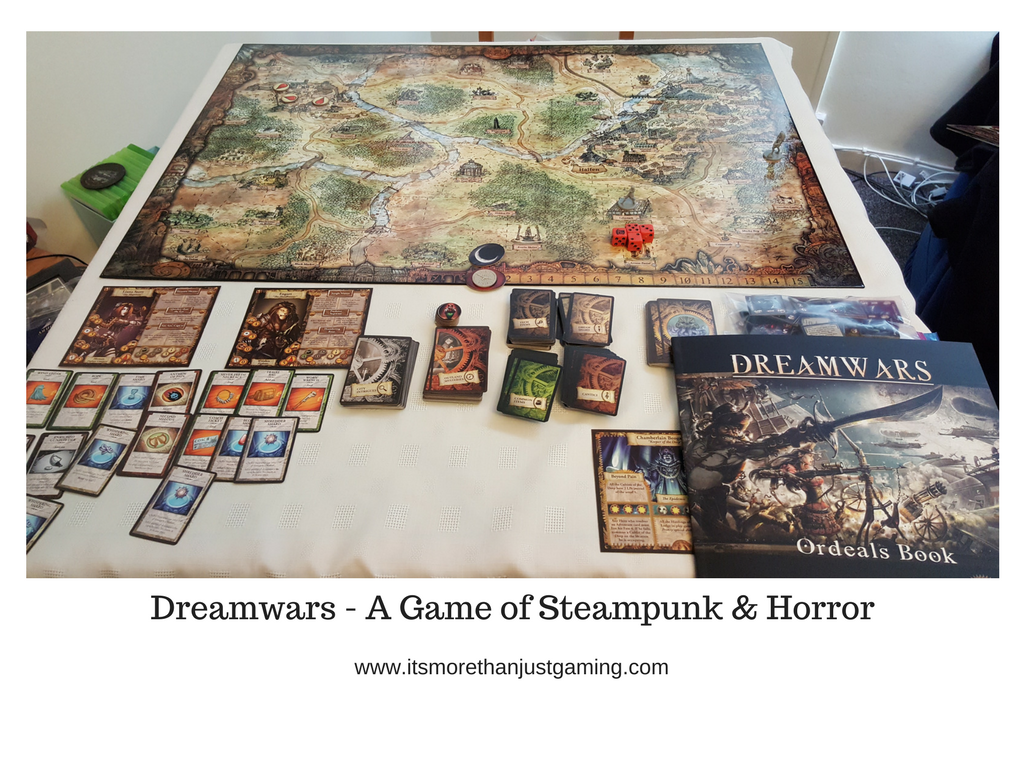 Hello everyone, welcome.  Today I am going to be doing a video and picture post about the new game, Dreamwars.  Dreamwars is an adventure game set in a steampunk fantasy world with a strong horror theme in it, where players take the role of heroes with unlockable abilities, spells and equipment and then venture into the game world to face monsters and challenges.  I did originally back this Kickstarter, however I withdrew my pledge as I realised that I had backed many things and that my flat is not of Gallifreyan design.  However, two of my friends did back it, one of which is the owner of my local gaming store, who sold his copy to another friend who then loaned it to me to do an unboxing and how to play video.  So, thanks to them you have this post.  Let’s get on with it, shall we.  Dreamwars, in two videos…
Unboxing and Card Anatomy

and now, how to play

However, as someone who has watched many unboxings and the like in the past, I am aware that I always wanted a closer look at the components than you get on the video, so I took some photos too.

I deliberately chose that Deep Dive armour for the Tech Item as it made me think of Hadrinn, my DnD Dwarf, who used to fight sea monsters for a living.  Anyway, onto the characters.

And now, onto the villains…

I should point out, in case it is unclear, the event cards in Admiral Seazar’s image and future pictures will change on a turn by turn basis, and I only selected three that matched one of the celestial alignments on his/their cards.

That is all the great Nemesis cards from the core set.  Now, I thought I would share a handy reference guide to symbols, to save you checking the rules.

You can see the Defense Value at the top, so heroes need to roll 4 or fewer when the Cultist attacks, it has one wound and a speed of three.  On the reverse is some flavour text and in the case of other, more powerful monsters, their special rules would be located under the flavour.

So that is Dreamwars.  I think it looks pretty awesome, having what appears to be borrowed and simplified mechanics from the game, Arkham Horror (Great Game, lots of rules…).  Each adventure can be played stand alone, however Dreamwars is predicated on the three chapter system, with success or failure in each chapter branching into a new scenario.  That, I like, it means that there is a lot of outcomes to any one ordeal (4 in fact) and I think this adds to replay value.  And, let’s be honest here.  For those in my generation who had Heroquest, we replayed those adventures a lot anyway.  Hope you enjoyed, see you next time!

5 thoughts on “Dreamwars – A Game of Steampunk & Horror”