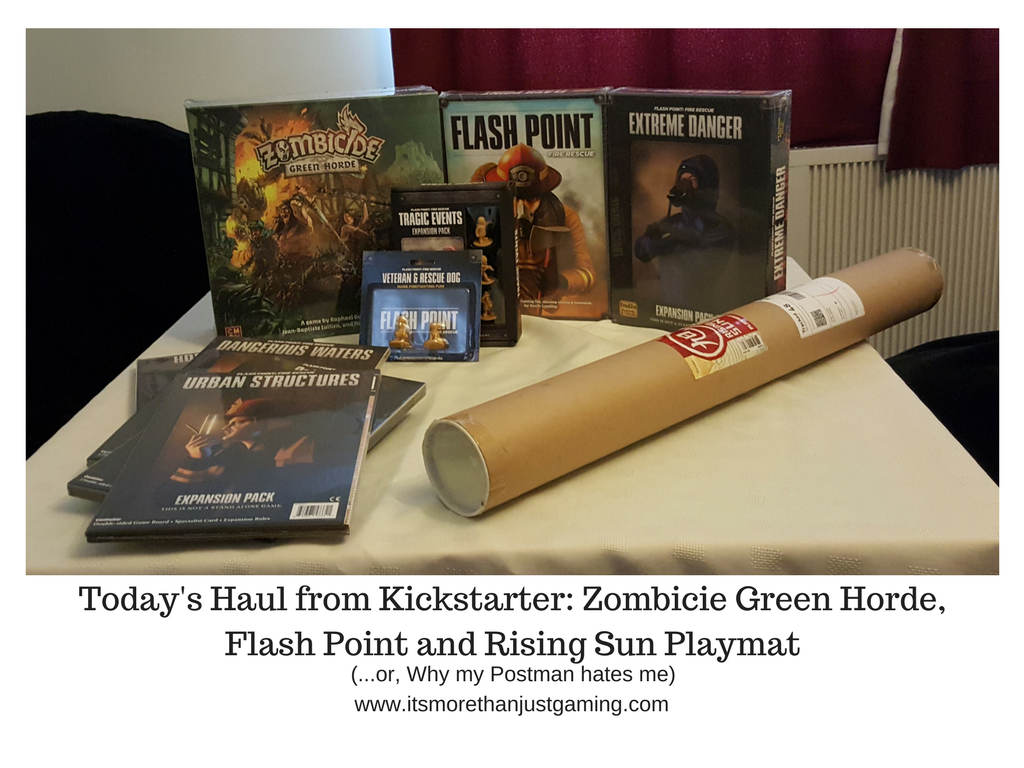 Hello folks, welcome.  Today’s post is about my recent Kickstarter deliveries, and was going to be entitled “Why my postman hates me…” but I don’t think that is a good title for search engine optimisation, so “Today’s Haul…” is what you got.  Also, technically the Rising Sun playmat arrived on Saturday but I only just got round to dealing with it today.  Zombicide: Green Horde and all of Flash Point arrived today which was still rather a bulky thing for the postman to deliver to me.  Incidentally, not only am I top floor, but the door furthest from the stairs…

This post will be light on words and heavy on pictures.  So, without further adieu, let us move on to today’s haul.

Don’t the games look happy together?

First onto Zombicide: Green Horde.  This expansion to Zombicide: Black Plague adds Orcs into your game.  With an Orc Necromancer, Abomination, Fatties, Runners and Walkers, 6 new survivors, and a Trebuchet there is a fair amount to add to the existing game.  Along with some new tiles and items of course.  Full unboxing video will be uploaded soon.

Flash Point is a game of Fire and Rescue that I learned years ago when at University.  I even wrote briefly about it in my Blackpool Roadtrip Blog.  When a new expansion, Flashpoint: Tragic Events was put on Kickstarter, I backed the whole package getting all previous expansions and the core game, as it was a really good deal and I love the game.  A full blog will be forthcoming at some point in the future.

Rising Sun is the second appearance for Cool Mini or Not on this Blog.  A game of Feudalism and myth in Japan, I was intrigued.  When I looked at the Kickstarter and saw one of the exclusives was basically Godzilla, after attempting (and failing numerous times) the Godzilla roar in my flat, I backed it.  I was also hoarse for days.  Sadly all they have sent me so far is the mat.  But it is still gorgeous, isn’t it?

As noted you can expect full posts for each of these, in fact Green Horde is already in production and you should see it no later than Wednesday, all being well of course.

Have you backed anything cool recently?   Has it arrived?  Why don’t you tell us in the comments below?