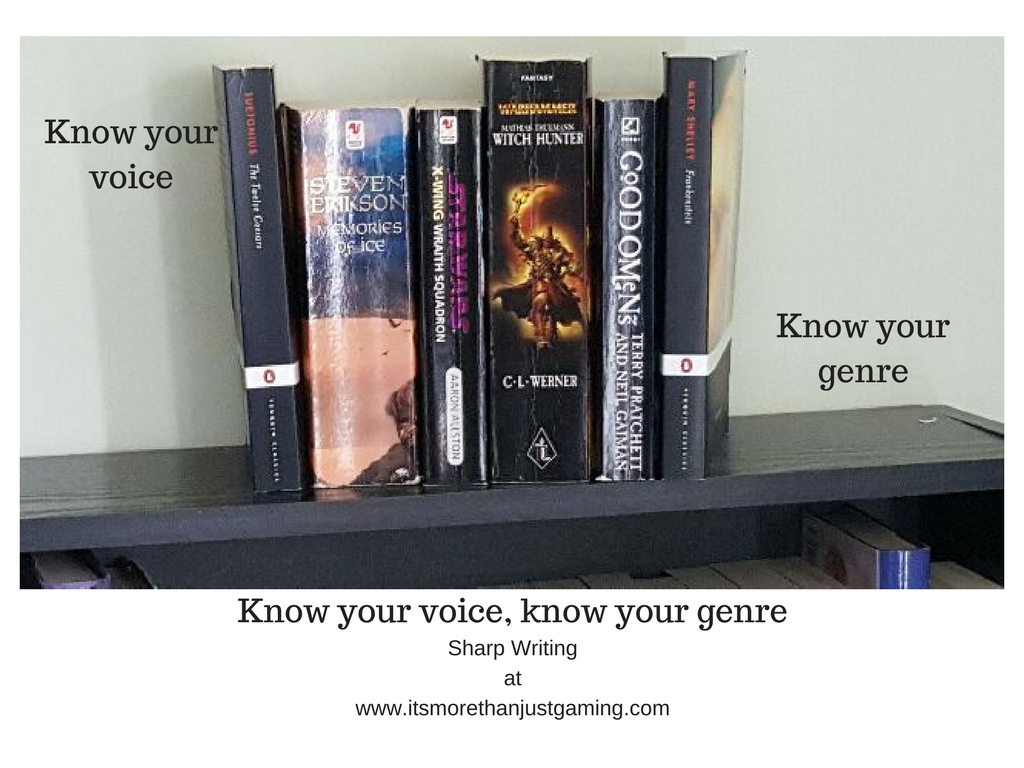 Today I wanted to talk a bit about genre and voice for the purpose of creating the intended response.

When I was at University a large portion of my degree was spent sitting in a classroom reading other students’ work, and then providing feedback.  As you can imagine, there were lots of different styles, loads of stories and, as you might expect, varying skill levels.  By my final year, everything that I read was of a reasonable standard.  Not all of it was of interest, but the rookie mistakes were few and far between.  One day I was working my way through a pile of drafts and I found one whose title caught my eye.

Knowing that a Wendigo is a carnivorous, if not cannibalistic, spirit from North America I thought, “Great, a horror.”

I started reading a story about a bachelor party come hunting trip  gone horribly wrong, which made for a very good setting.  However, the tone and language read more like what I might expect from part of “The Hangover” series of movies.  It felt more like black comedy.  I was disappointed, however, it could easily have been intended as a Black Comedy and my expectations were unreasonable.  As was my responsibility,  I gave my feedback and noted that the tone was less horror and more comedy than I had expected.  I suggested, that if the writer was going for horror, they needed to change some of their language and the dialogue.  And that was that.  I never got to read the finished piece, which is a bit a shame really.  I hope the writer went on to produce a good piece of fiction.

It got me thinking.  In this case, Genre was defined by language and dialogue.  So, I started wondering, can we use this?

And the answer is, of course we can.  I attended University in an English city called Lancaster, which is about a thirty minute drive from the Lake District – a national park of hills, fells, mountains, and a lake.  Fun fact, there is only one lake in the Lake District.  The rest are Waters, Meres and Tarns.  The differences between them…are utterly irrelevant to me.  However, the Lake District is an idyllic setting of rolling landscapes, lush greenery and sparkling water.  Why am I telling you this?  Because the Lake District can also be cold, wet and blustery, isolated and dangerous.  The context of the place changes very drastically with a slight change of language.  Now, I am not for one minute suggesting that when you are writing about something grim and horrid, you simply change the background to reflect that.  That is pathetic fallacy, it is cliche.  The point I am making is that the same thing has multiple ways to describe it and the emotion evoked by differing descriptions is likely to be quite different.

A tree can be grand or looming.  A meadow can be peaceful or silent.  Fire can be warm or destructive.  A thesaurus is your friend when looking for alternative ways of describing things, though, a word of caution.  Don’t overdo it.  You’ll probably need to learn via trial and error to find the right balance, however I would categorically state that too much description takes us into the realms of overwriting.  To use a gardening analogy, seed a few descriptive words in your prose and let the emotional impact grow in the minds of your readers.

Use words that evoke specific responses and let the reader do the rest.  Plant too many, and they fight for light and water, and diminish one another.

I think that is how you turn your voice to the genre you want.

What are your thoughts on this?  Have I overly simplified it?  Complicated it?  Have I forgotten something crucial?  Or do you agree?  I’d love to hear from you!