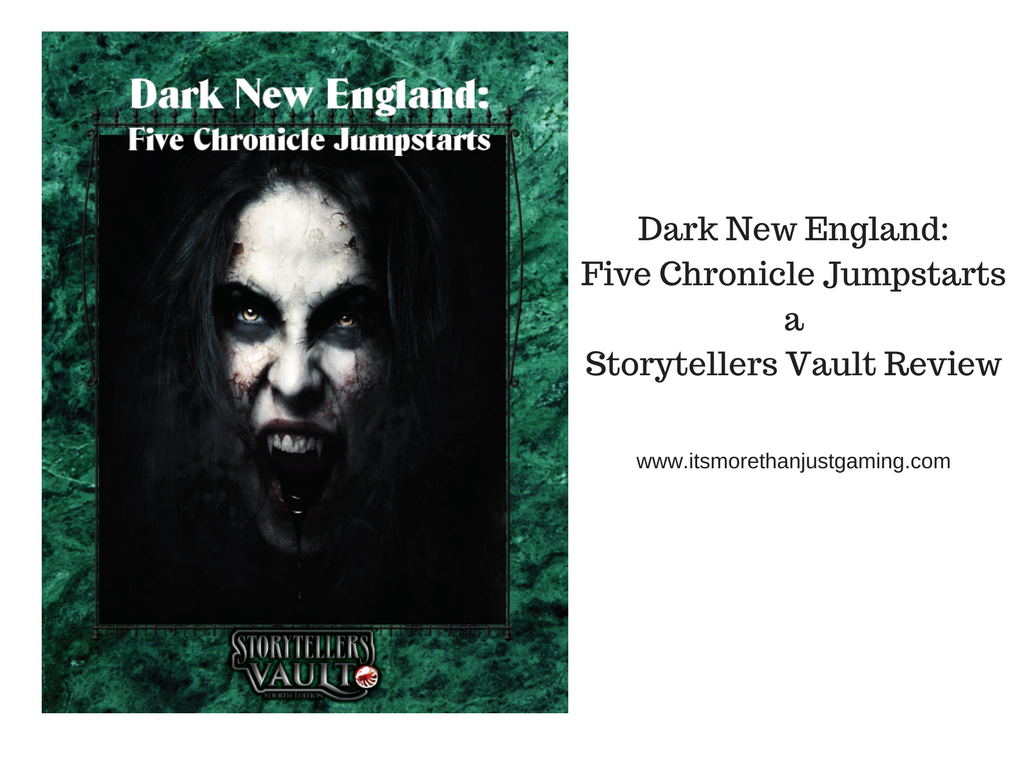 Hello everyone, welcome.  Today I am doing another review for the Storyteller’s Vault in this case, Dark New England: Five Chronicle Jumpstarts by Joshua Heath.  For those of you who have been reading these reviews, you may remember that Joshua Heath is also the author of a previous item reviewed, The Curse Pole. So, without further adieu, let’s take a look at Dark New England: Five Chronicle Jumpstarts.

Dark New England: Five Chronicle Jumpstarts is a book with five story hooks for Vampire: The Masquerade Games based around New England.  They can each be played individually, though it would be entirely possible to include them all as part of a chronicle.  Each story hook is comprised of a page of description setting the premise and giving a basic introduction to NPCs and their motivations.  Suggestions are offered as to how to involve a group of players (though in some scenarios these suggestions are more prescriptive than others).  Character backgrounds and character sheets are then supplied.  In one of the stories, Monastery of Metamorphosis, there is also basic details for a new bloodline, with a unique combination discipline and a high(ish) level ritual/ritae that is part of the story.

The 5 Story Hooks are

A Singular Darkness – A story hook intended for a solo player that focuses on the hunger of vampires, and the dangers of the hunt.

Monastery of Metamorphosis – A Story hook for a group invited to observe and participate in the ritae/ritual of a Tzimisce Pedagogue.  The players are not the only ones on the guest list

Obelisk of Oak Island – An occult artifact is uncovered in remote territory and a Tremere needs a group of enterprising individuals to go retrieve it.  What could go wrong?

I thought the idea behind Singular Darkness was fantastic.  Reading the premise I can see exactly how it would lead to quite a tense game, with just enough hazard to mean the player isn’t going to simply waltz through it.

Monastery of Metamorphosis was a really cool idea.  This story really had the potential to ramp up the horror factor on the game, as anything with a Tzimisce does.

Obelisk of Oak Island was also quite a cool idea in terms of going to find an artifact in dangerous territory.  I would modify the adventure slightly as the premise dictates the players are hired on as “Body Guards” but calls upon them to solve quite a few other non combatant issues, so I would probably make the Tremere who hires them powerful, but useless with modern stuff and he needs expediters as much as bodyguards.

The NPCs were quite detailed, and quite cool as well.  Several of them could easily be used in other stories if the particular hook wasn’t to your taste.  And some of them work for the story hooks and other plots as well as they are not bound to any locale.

When I reviewed The Curse Pole which also bills itself as a 1 page jumpstart, I was critical of it for calling itself a jumpstart as I felt there was too much intervention required by the storyteller prior to play to call it a jumpstart (It was still very good, I just felt it was more a plop and play).  This is not the case here.  I genuinely feel you can pick up any of the one page hooks and the character sheets and get started right away as there is enough detail to do that.  Of course, you can always add stuff if you wanted too…

Some of the NPCs felt overpowered.  I read a formula for calculating balanced power level for a standard unremarkable NPC, and part of that formula is to take the square root of their years as a vampire and that is how many discipline powers they should have.  When building named NPCs with plot significance, I tend to give a bit more than that but within acceptable margins.  There was one NPC that was approx 50 years a vampire with 13 disciplines which is almost double.  That felt too much to me.  Easy enough to fix, but definitely felt too much.

It is suggested that the only rulebook required to play is the V20 core rulebook.  This is technically true, however some of the suggested options refer to material that is in other rule books.  These books are V20 The Black Hand: A Guide to the Tal’Mahe’Ra and Dark Colony.  Certainly you can run the scenarios without them, but your options narrow.  V20 The Black Hand is also a useful sourcebook for understanding the roleplaying hints of some of the NPCs as there is some terminology that I would equate to jargon if you  are not familiar with the sect.  I would also say, I tried to google one of the Dark Colony references and nothing sprang up, so it isn’t easy information to find outside that book if you don’t already know it.

I found this book really useful.  Certainly it has a specific geography in mind, with specific NPCs and events, but I would suggest most of the stories could be modified to fit almost any chronicle.  Certainly, my three favourites of the stories provided, A Singular Darkness, Monastery of Metamorphosis and Obelisk of Oak Island could definitely be applied to other parts of the world.

The hooks were good, the NPCs interesting and the layout looked professional.  I can’t really ask for much more than that.

The next part of this post contains an affiliate link to Dark New England: Five Chronicle Jumpstarts.  This means that if you click the link and purchase anything on your visit to the Storytellers Vault, I will receive a small commission that helps keep this website running.

Dark New England: Five Chronicle Jumpstarts is available from the Storytellers Vault for $5