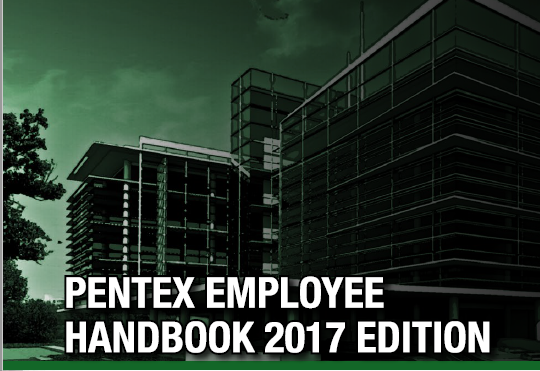 Hello everyone, welcome.  Today I am writing a post for my World of Darkness library series.  It has been a while since I added to this, though more content will be coming in the nearish future (I am in the process of reading Beckett’s Jyhad Diary which will get its own entry, but it is 500+ pages of A4 small type prose.  I have a fair bit to get through…).  Today I am happy to be talking about a World of Darkness book that came out this week, one that I have been waiting for since I first spotted it on the Onyx Path Blog.  The book I am talking about is the Pentex Employee Indoctrination Handbook.  This post contains affiliate links, meaning should you click a link for a Drive Thru RPG product and decide to purchase it on your visit, I will receive a small commission which helps keep this website running.  (Note – Featured Image is cropped from the Book itself, and I have added comments to other images used for review purpose.  They are in keeping with the tone of the product)

In the World of Darkness role-playing games, everything is just a bit darker.  Everything is just a bit bleaker, and corruption is rife in the world.  And by corruption I do mean corporate and literal corruption (where things decay and turn into goopy sludge).  In a world this bleak you would be quite correct in assuming that there are powerful corporations out there intent on exploitation and profiteering, regardless of consequence.  You would be forgiven for thinking that this tends to be the actions of Vampires, who tend to have their fingers in many pies in the World of Darkness.  You would also be incorrect.

Pentex is THE corporation of exploitation and profiteering.  Most of the world doesn’t even know it exists, sitting behind various subsidiaries pulling their strings and guiding them towards its own insidious goals.

In World of Darkness every scare story you hear about corporations and their products is probably true, and often traceable back to Pentex.  Suspect that video games are making kids more violent?  You’re right!  Tellus Enterprises floods the video game market with their award winning FPS, Biological Warfare.  People praise the reality physics of the game, little realising “Volunteers” were used to determine exactly what happens when a chainsaw bites into a thigh.

Suspect that the corporations are monitoring your online activity?  Right again!  Sunburst Computers store all your data and online activity from their computers, tablets and smartphones on their cloud servers.  For your convenience of course.  Should you ever loose all your data, Sunburst Technicians are more than capable of restoring every document, every keystroke back to your computer’s memory.  Now that is customer service!  And, the built in webcam and voice recorders can be activated in invisible mode by those good folks at Sunburst whenever they want.  But, of course, they’d only do that to aid Law Enforcement if your tablet got stolen.  And any suggestion that they are recording you without your permission will lead to a visit from your friendly neighbourhood Pentex Legal Team.  If you are lucky.

The last two paragraphs are an example of the tone the Employee Indoctrination Handbook uses.  Written in the same overly, unrepentant, and not always entirely warranted positive tones of employee handbooks the world over, I had to smile at various points where the manual told me in its cheerful tones all the terrible things Pentex and its subsidiaries get up to.  Sometimes I didn’t even need to read between the lines.

I am going to go back a bit.  In World of Darkness, there is a force of known as the Wyrm.  The Wyrm was once part of the natural order, representing natural decay, due to intervention by the Weaver (another force of nature representing order and stasis), the Wyrm is now insane and represents corruption.  Pentex is a corporation what serves the Wyrm, its mortal directors profiting by exploiting and perhaps hoping that they will become powerful agents of the Wyrm in its toxic realm of Malfeas.  Everything Pentex does, it does to poison Gaia.  This might manifest as an oil spill from an Endron Supertanker (The Pentex Energy Subsidiary), or it might manifest as increase in violence towards minorities as a result of bigoted reporting on the RED Network (Pentex News Subsidiary).  Because both of these events attract poison spirits, or banes.  And more banes means the Wyrm gets stronger.  Pentex is often an adversary for Werewolves in the game Werewolf: The Apocalypse.

Honestly, for a 90 page book (which is short by some World of Darkness Standards), the Pentex Employee Indoctrination Handbook has much to recommend it.

First of all, you don’t just get the Handbook.  The meta narrative within the manual indicates that you are reading a copy stolen by Glass Walker Werewolves  (City Wolves).  Not only that, they stole a copy that had notations attached by Pentex Directors.  These notations allude to events mentioned in the core text revealing what actually happened, not just the propaganda which gives some story hooks for storytellers.  Some of the notations indicate rivalries and bitchiness between the directors, which is also fantastic.  And you have clipped on notes from various Werewolves who have passed comment on the section you are reading, giving further insight and plot hooks.

I have already talked about the tone, which amused me.  It was entertaining to read about the computer game developers of Tellus who, if they are achieving targets, are allowed limited video call access to speak to their family.  Which is necessary as they are targetted so heavily they don’t tend to leave their desks.  Ever.  Fortunately, Pentex is more than happy to bring food direct to your desk.  It is the same for Sunburst Computers.

I particularly liked the constant references in every subsidiary to Magadon Inc., the Pentex Big Pharmaceutical Company.  Tired at your desk?  Need a pick me up before going on air?  Or the requirements of captaining a Supertanker getting you under the weather?  Magadon can help with any number of its pharmaceutical products.

Amusingly, every single product had the side effect “May cause Anaphylaxis in the presence of Canines” which I am taking as a Werewolf Joke.  (Werewolves destroy banes.  Including people irreversibly infected with them).

Another section I particularly liked was the section on how to deal with Lycanthropes.  There were some really good story hooks for Storytellers of Werewolf: The Apocalypse here, and I particularly liked that Shadowlords, my favourite tribe of Werewolves by far, were accorded grudging respect from Pentex.  And by respect, I mean they are the only tribe with a Kill on Sight order.  This reaffirmed my affection for the followers of Grandfather Thunder, and I particularly liked that one of the notations from a Werewolf suggested that this section never be shown to the Shadowlords as it would make them insuffereable, given they would likely wear it as a badge of honour.

I was also amused to note a reference to a series of videos about the various werewolf tribes held on the Pentex company Intranet.  I say amused as the author of this section of the book is known on Youtube as The Gentleman Gamer, and it was his series “The Pentex Guide to Werewolves” that helped me understand the core game back when I was learning.  Nothing like a bit of self promotion!  Fair play to you.

There really wasn’t much to fault.  As a lore book there aren’t any stats or character sheets which some folk might find a bit problematic, however I don’t think that was really the purpose.  Having read this book, I think it works best if you pair it up with the Book of the Wyrm which has a lot of information about the Pentex Directors, Pentex First teams (Death Squads employed against Werewolves, among other things) and their Black Spiral Dancer Allies (Wyrm tainted Werewolves).

I don’t tend to run Werewolf games, but I still am glad to have this on my bookshelf.  From my perspective, World of Darkness has a lot of stuff in it, and whatever game you run it is easily possible to cross into other areas and still have a lot of fun.  Werewolves often clash with Vampires, which brings them into the World of Pentex.  Whether Pentex takes the enemy of my enemy approach, or simply becomes another adversary is down to you as a storyteller.  Either way, the Pentex Emplyee Indoctrination Manual is a good addition to any gaming shelf