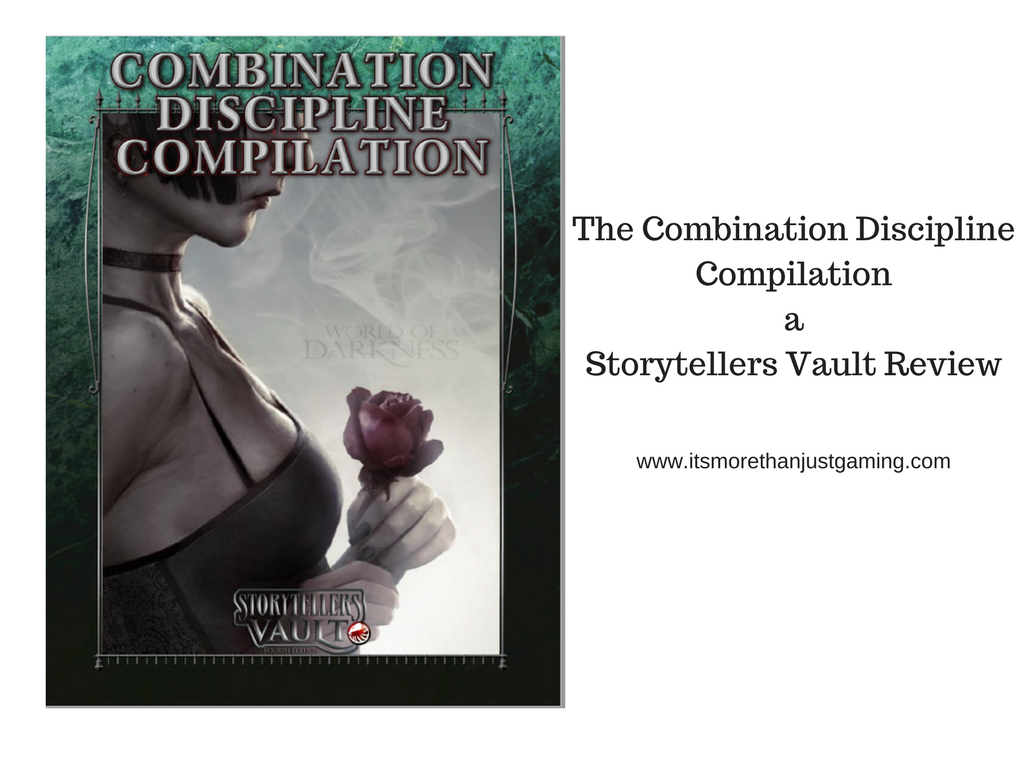 I should state, I was given a free copy of this compilation for review purposes

Not much to say on this.  The book is an alphabetical list of combination disciplines, with each entry listing their name, pre-requisites, a brief introduction to the power, the rules of the power and the experience point cost.  In some cases there is only one way to qualify for a combination discipline, for instance discipline A at level X and discipline B at level Y, however a good number of these combinations and techniques have alternative options for one of the disciplines (So, some techniques might require Animalism at a certain level, however the second discipline might be Protean or Serpentis).  To make some of these techniques rarer, and to emphasise their power, some techniques require other techniques as pre-requisites.  For instance there is a whole family of Discipline Techniques revolving around the creation of supernatural fog.  Once a character has the ability to summon the fog, they can then use it for various other powers such as using it to substitute for Eye Contact in Dominate, if the target is within the Fog (and has their eyes open).

There are a lot of really cool abilities in this book.  My favourite, by far, was Carnivale Fantastique (Daimonian 4 Mytherceria 5).  This is listed as a Baali power (despite Mytherceria being the highest discipline level) where the Baali can whisper into the ear of a sleeping target locking them in a dream of pure pleasure, the Carnivale Fantastique, until they are freed from the “spell” or die of dehydration.

The fog powers, which start with Opening the Gates of Mist (Auspex 3, Daimonian 3, Obfuscate 1) were really cool.  I have to say, of all the classic vampire powers, as in from old school Hammer Horror movies or Brian Lumley Novels, what was lacking from the standard discipline abilities is the ability to summon a mist.  Certainly, some vampires can transform into mist (though this is quite a rare power outside the Gangrel Bloodline) and I believe Thaumaturgy might cover it in some respects, but it always felt like it should have been a discipline.

There are a lot of Baali powers.  The two I have already mentioned above are intended for Baali.  Many of them are techniques that use Daimonian (the Baali clan discipline) and Mytherceria (The Fae oriented discipline of the strange Kiasyd).  The end result are weird and wonderful powers, like the Carnivale Fantastique.  These powers feel good and give the aspiring seeker of demonic knowledge quite a few really awesome, and powerful, tricks in their arsenal beyond the standard.

There are some really interesting Quietus techniques for assassination.  Such as assassination by animal proxy.

The layout was professional.

I felt there were perhaps too many Daimonian/Mytherceria powers (I didn’t count them, but the combination stuck out each time).  Certainly I liked the powers, for the most part, but I wasn’t sure how I felt about something that requires Kiasyd and Baali to collaborate.

A number of the techniques were similar to other techniques I have read in canonical source books.  I stress similar, as I went back to check the ones that stuck out against other source books I have access to and they are not the same.  However, to give context, within the Combination Discipline Compilation there was a power called Awaken the Typhonian Beast (Serpentis 4/8, Vicissitude 4) which allows a Setite to transform into a Typhonian Beast, or a large serpent with Serpentis 8.  This felt similar to Serpentis 7 Divine Image where the Setite can take the form of an Egyptian God’s Avatar.  Such as Set/Typhon, or even Sobek.  The two powers are different as Awaken the Typhonian Beast is more akin to a war form, focusing on physical abilities whereas Divine Image also affects social attributes and is equally useful in fooling a blood cult as it is ripping them apart.  There were a couple of animalism/fortitude/protean powers that looked similar to things I had previously read, but again, it was merely similar and not the same.

Am pretty sure there was a misprint in Heart of the Wolf, where the writer wrote Hispo Form, but I think they meant Lupus.  (the ability is used to confuse Lupines into thinking you are not a vampire, and there is a higher level power that actually allows the wielder to shapeshift into Hispo form, so I think this is a misprint – I didn’t find many errors, I have to say).

This was a well put together list of cool powers.  I have mentioned a few above, but there were many more that caught my eye.  I think I will definitely use some of these powers on NPCs in my chronicles because they are non standard, and they do seem to make narrative sense.  Admittedly, I would probably adjust some of the pre-requisites for some of the powers (one of the Obfuscate techniques had the character vanishing from sight, but only required Obfuscate 2 – the justification was that the other requirement was Celerity 4.  I would swap those over.)  However, that is the great thing about roleplay games.  You can swap things around if they don’t quite work for you, and there is a guide on how to cost the powers at the start of the book, so if you adjust requirements, then you can adjust the cost and still keep it balanced.  For a player or a storyteller that wants to add a bit of spice or some unique powers to their chronicle, this supplement is a worthy addition to any collection.

The next part of this post contains an affiliate link to Combination Discipline Compilation.  This means that if you click the link and purchase anything on your visit to the Storytellers Vault, I will receive a small commission that helps keep this website running.