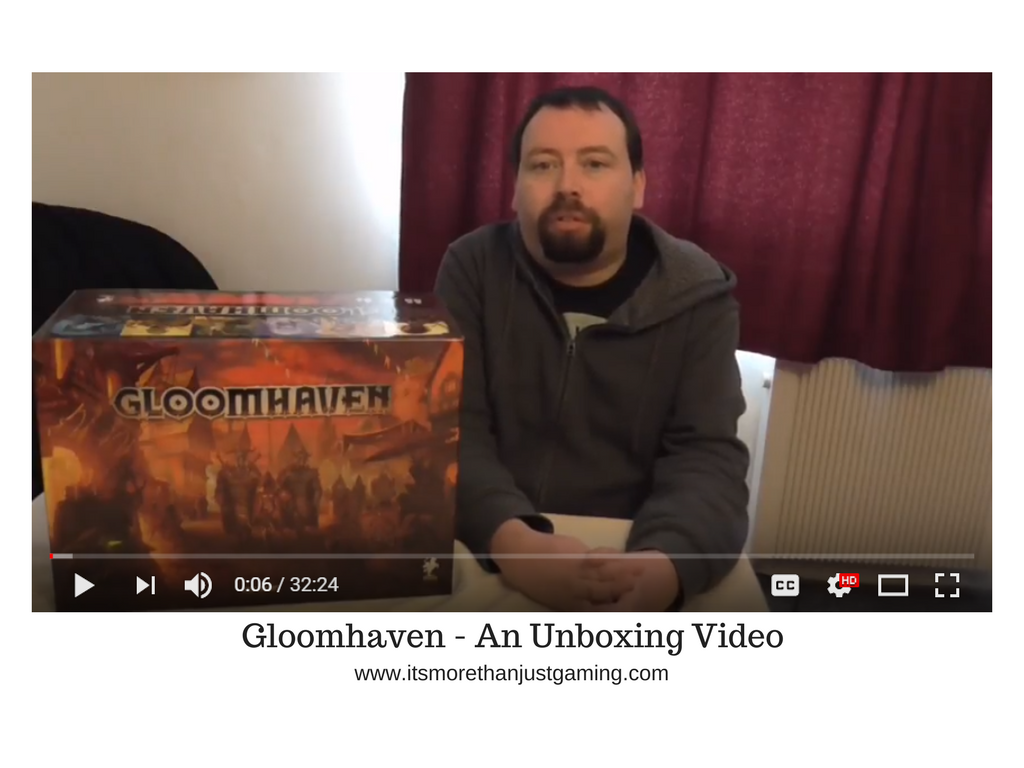 Hello everyone, and welcome to you.  Today I am quite excited to be sharing my Unboxing of the game Gloomhaven.  Gloomhaven is a Kickstarter I backed last year, for the second printing of the game.  I was immediately interested in the game as it is based heavily on RPG Dungeon Crawls, where players take the rolls of Heroes venturing forth from the town of Gloomhaven.  There is a beautiful campaign board that gets stickers added to it as you progress and complete scenarios, and there are personal quests and adventures available that act as goals for specific characters.  And, along the way, the better you do in your adventures the more prosperous Gloomhaven becomes, meaning more stuff in the market to buy and new characters start at higher levels.  I may well do a more comprehensive how to play at a later point.  I have read the rules once and they are scarier than any of the monsters you might face!  On this post I will concentrate on the unboxing, and then share some images afterwards as at the time of recording, I didn’t know what everything in the box was.  Enjoy!

And I said the rulebook was a monster!  The box nearly killed my posty because I live on the top floor of a block of flats.  Can’t wait until my other Kickstarters show up.  Bet he can’t either…

Anyway, that was a long quick peek in the box.  However, since I didn’t know what everything was I took some photos and am sharing them with you now.

So, we have the monster rulebook, a campaign book with 90 scenarios for the campaign, the red and grey thing on the right is a booklet of additional scenarios I bought at kickstarter and the Town Records is sealed.  You unseal it when a character achieves their goals for the first time and read it until it tells you to stop.  I am really really excited for that as I don’t know what to expect.

There is a full campaign board, some of which I accidentally chopped off in this picture.  Each location that has a quest has a grid reference, a location and a sticker.  The map evolves as you play.  You can also track global achievements on this board as well as Gloomhaven’s Prosperity.

Of course there are going to be quests within the city, as well as city events that need their own locations, so the top right of the board zooms in on the city.  It is just awesome.  And to be honest, you could easily use this board for your own DnD purposes should you find the need.  I won’t but you could.

On the left you can see the various achievements that can be gained which unlock certain features.  On the right you have the various locations that eventually become unlocked through play.

So, the mountain of cardboard I plowed through in the box was room tiles, obstacles and these gorgeous monsters.  The Dragon is awesome, but I am just loving the headless horseman.  Because why not?

There are 6 available classes at the start of gameplay all with the above.  However, as various quests and scenarios are completed, other classes become available for play.  It is expected that a single player will play multiple characters over a campaign allowing the to experience various play styles.

If you are concerned that 90 plus scenarios in a campaign, that can be replayed casually once completed, is not enough for you, Gloomhaven has the facility to randomly generate dungeons for you.  How cool is that?

Travelling from town to your adventure, or between adventures is hazardous.  And road cards present mini scenarios with two choices for the party to decide on each time they travel.  Some responses are very good.  Some responses are very bad.  This adds to the drama and the feel of an untamed wilderness full of monsters.  There are also city encounters, which tend to be a bit more positive, that you can choose to have upon returning to the city.

When creating a character, each player is given two main quests.  They pick one to be their character’s “Goal” and return the other.  Upon completion of their quest, they retire.  Retirement has a number of positive impacts for both the player and Gloomhaven.  Not least of which is there are a number of sealed boxes and envelopes that might just get opened as a result, unlocking new classes and stuff.

Truthfully, those last two card stacks don’t belong in the same image.  But I am committed now.  When players start a scenario they get a battle objective.  If the scenario succeeds and they complete the objective they get the number of tick marks at the base of the card on the notes section of their character sheet.  Three tick marks mean they gain an extra perk.  And they can gain six extra perks this way.  As a reward for completing some scenarios, sidequest cards are drawn and areas unlocked.

As with any self respecting RPG, one of the goals is treasure and cool equipment.  And in that respect, Gloomhaven cannot disappoint.  There are shop items that are available for purchase, the list of available items increasing as Gloomhaven’s prosperity increases.  And, as you adventure you find designs for weapons (as I understand it), that are added to the Market.  And there are things available from specific quests, which get ticked off a list in the back of the quest book once it they are found.  I have to admit I have not recently peaked at the list, though I imagine if I did I would be rubbing my hands with glee.

So that is a bit more detail of what I found in the video.  Admittedly, there are a handful of card types that I haven’t covered here.  There were lots of different combat decks all, which I did show in the video though they are relatively self explanatory.

So, let me know what you think in the comments below.  Does this game sound interesting?  Do you own it and if so, what are your experiences?  Though, no spoilers please!

8 thoughts on “Gloomhaven – An Unboxing Video!”