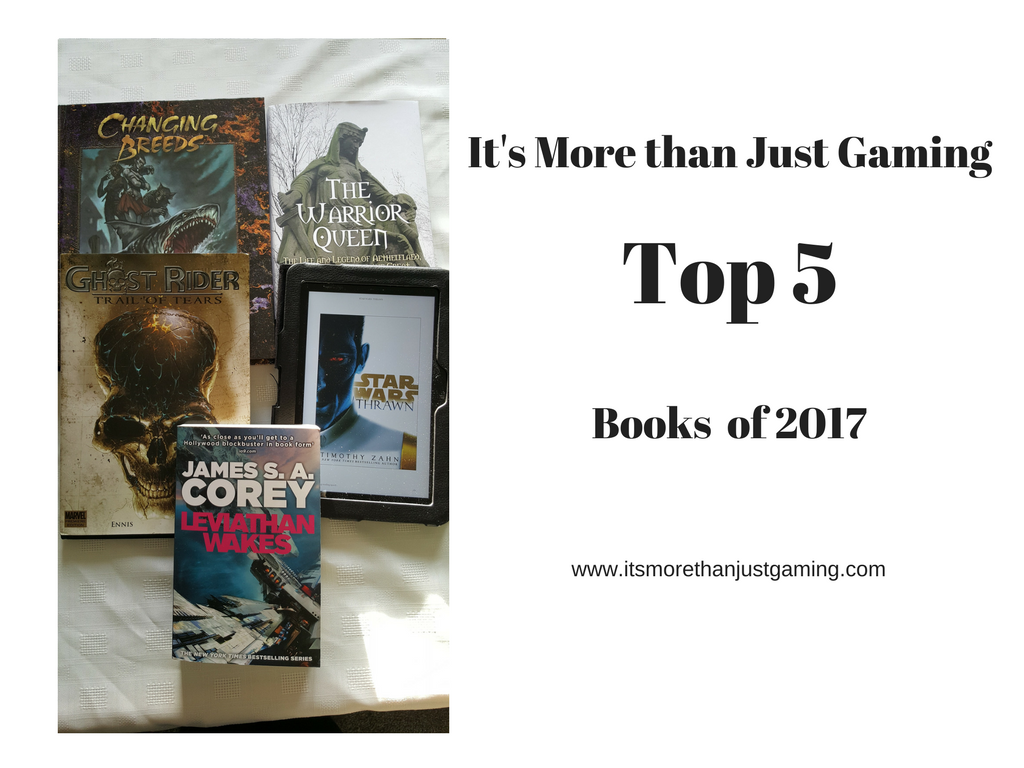 Hello everyone, welcome to the third and final installment of my Top 5 Series for 2017.  This time I am looking at books.  Unfortunately with time and other things being a factor I haven’t read as much pure fiction as I would normally so I have broadened my field out a bit as I still managed to find time to read this year.  It was just a case of reading lots of different things.  So, let’s get on with it.

I have read a fair amount of non-fiction this year from Hollow Earth books to books about the unexplained.  However, my favourite Non-Fiction book, which admittedly I am still reading, is The Warrior Queen by Joanna Arman.  This book is about Aethelflaed, daughter of Alfred Great and the only female Saxon monarch (as far as I understand).  I have been doing some work on a project that is set during what we might term the Dark Ages, when all the Kings were Alfreds, Aethelreds and Aethelwulfs.  And the truth  isI knew next to nothing about this time period.  I have watched much of Amazon’s Vikings, which was enjoyable but a historical train wreck from what I could determine glancing at the internet, and I have watched a series of the Lost Kingdom (having been unable to get into the book years ago), which I found interesting and enjoyable.  And I decided I wanted to learn about the period.

The Warrior Queen is a well written and easy to read text, which is saying something given my unfamiliarity with the period and the recurrence of names quite frequently without any surname to distinguish them.  As there are gaps in historical records, there is a bit of speculation or gaps filled by looking at Aethelflaed’s father, Alfred and examining what he was doing in order to extrapolate what she might have been doing.  I have found this book enjoyable and interesting and it has rekindled an interest I have for Royal Dynasties.

Not this year but last I heard about and watched a TV series called the Expanse.  It was mind blowing Sci Fi set a couple of hundred years in the future where humanity has colonised the solar system.  It was amazing.  I then found out, like many great TV shows, there were books.  And I got the first for Christmas last year and read it this year.  The story is fantastic following the characters Jim Holden and Detective Miller.  Holden is one of a group of surviving crew of an Ice Miner that is destroyed by an unknown vessel whilst in deep space.  Miller is hired to find and return home (whether she wants it or not) the missing daughter of a wealthy influential corporate type.  The Two follow their own paths through “The Belt” and various stations around the Solar System until they converge together to discover something just a little bit more sinister is going on.

Anyone who has read reviews I have done recently will note I can be quite a picky critic.   Not as picky as some, and I try not to be horrible about it, but I do pick up on things that I consider sloppy or wrong.  I cannot recall noting anything about this book that falls into that category.  That is no guarantee the same technical flaws weren’t there.  All it means is I was enjoying the story so much I just didn’t care.  The story is fantastic.  It makes a refreshing change for Sci Fi to stay within our home system.  And, despite that to still make it feel vast and empty.  The story also had some fantastic in system political intriguing between the Governments of Earth, Mars and the Outer Planets Alliance, which added an element of realism to a story about space stations and strange ships and alien biological matter.

OK, this category is a bit of a cheat however it is still true.  Earlier this year I learned that my favourite Star Wars author had released a book called Thrawn and I was excited.  Sort of.  To give a bit of context, Grand Admiral Thrawn has been one of my favourite fictional characters since the mid 1990s when I first read Heir to the Empire and its sequels.  He is, was, an Imperial Officer that survived the death of the Emperor as he was in “Exile” in the Unknown Regions on a mapping expedition.  There is more to it than that, but that is the cover story.  He returns a few years after Endor and over the course of a year or so brings the New Republic to its knees through a series of brilliant strategies.  All of that was removed from the canon when The Force Awakens came out.  And there were a lot of fanboys, like me, unhappy about that.  To their credit, Disney reintroduced the character, and did a reasonable job of it, through the TV series rebels.  Thrawn is the novel about how he comes to be a Grand Admiral in the New Continuity.

I always enjoyed Timothy Zahn’s Star Wars books, I was less keen on his Conquerors series, and Thrawn didn’t disappoint.  It was interesting to see Thrawn up close, which you never really got in the past.  He was always “The Grand Admiral” and you viewed him through the eyes of his Executive Officer or the protagonists.  That being said, you never get too close and you are still sometimes left wondering if he has any humanity at all (Thrawn is non-human, and is the only Non Human to achieve Flag Rank in the Imperial Navy).  He at some times seems to care for his subordinates and his aide, and sometimes he seems like a cold calculating strategy machine.  Worth a read, though I prefer the originals.

I reread Trail of Tears this year and enjoyed once again, in fact it is probably one of my favourite Graphic Novels and would make into a top 5 of them if I were to do such a thing.  Trail of Tears is set just after the American Civil War, and follows Travis Parham – a former Confederate Officer.  Wounded and broken at the start of the story, Parham is taken in and cared for by Caleb, a freed slave and now farmer.  An uneasy relationship grows into actual friendship as Parham learns to respect his savior, until it is time for him to move on.  Gold fever is calling, and he invites Caleb and family to come with him and seek their fortune with him in payment for all he has done for him.  Caleb graciously refuses and Parham leaves, promising to return when he has made his fortune.  Wind forward a few years, and Parham returns to keep a promise given to a friend, only to find Caleb and his family tortured and murdered by George Reagan and his gang of former slave owners.  Parham is enraged and begins hunting this gang, only to find he is not the only being trailing the murderers.  Along the way he spies a horseman shrouded in robes and mist.  The rider’s face is hidden in darkness beneath his hood, and he wields chain and fire with equal prowess.  Because Trail of Tears is a story about one of the Ghost Riders…

Ghost Rider is one of my favourite Marvel Characters, only pipped off the top spot by Dr Strange, and this graphic novel is one of the reasons why.  The story is brilliant, about suffering, humanity and the darkness in all of us.  As you would expect the story is grim and brutal, and drawn perfectly.  The artwork is some of the best I have seen in a graphic novel.  I love watching Parham following Reagan trying to avenge his friend, but also being terrified of this other vengeful being that knows no mercy or pity.  For a fan of the dark stories and horror, this is a must.

I nearly did a top 5 of my favourite RP books, but since it would be heavily lopsided I decided that I would simply include one book in this top 5.  Changing Breeds is a sourcebook for Werewolf: The Apocalypse that deals with the various other kinds of shapeshifter in the World of Darkness.  Now, regular readers will know that my favourite World of Darkness game is Vampire: The Dark Ages, and would be forgiven for assuming that my favourite sourcebook would be from that line.  And there were good books from that line, however Changing Breeds is in a class by itself.  If you read the standard 20th Anniversary rules for Werewolf you get a bit of flavour for the Changing Breeds so you can run them as NPCs, but it is quite limited in providing powers for them.  Changing Breeds gives a cracking introduction to all of the current Changing Breeds as well as all of their unique abilities to the point that a player could play one.  That is the level of detail in this book.  I didn’t get it for that reason.  I got it because I love surprising my players.  I love having Nosferatu stumble on Ratkin.  I love throwing a Wereshark at the Players from time to time (Because whilst they are terrifying, they are marginally less mobile out of water and the players have a chance).  And sometimes I throw in a Werespider to act as an agent of a really powerful being.  There is so much in this book that you can play around with that you can easily come up with something original and cool any time a player walks toward something that looks human, but they have identified as a shapeshifter.

And that is my top 5 books of 2017.  I make no pretense that these were full reviews, they were not.  They were an overview of the impressions I had from the books in question.   Some, like Changing Breeds will get full reviews in time.  Others may or may not.  I hope you have enjoyed this post and this series.  Let me know in the comments if you have read any of these books, or let me know what your top 5, or top 3 or top 1 are.