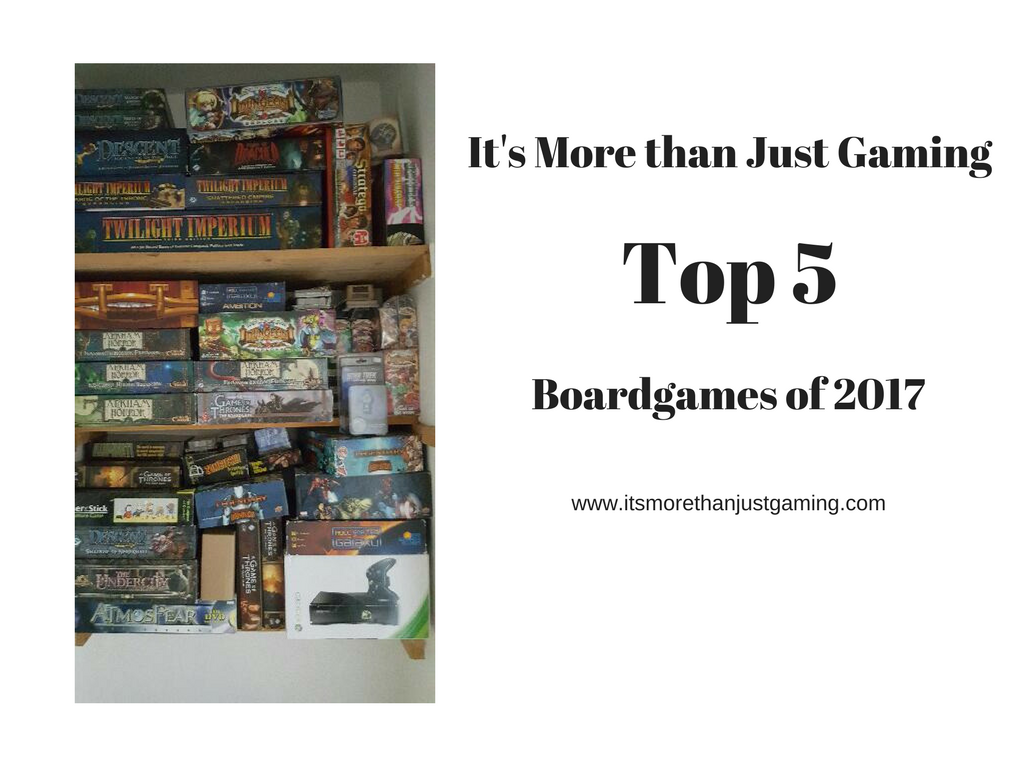 Hello folks, I hope everyone is enjoying the Festive Period.  Today I thought I would share the first in a series of Top 5s of 2017 for me, in this case Tabletop games.  This list is comprised of games I have played this year, rather than games that were released this year, as it felt more appropriate.  Obviously there are loads of other games out there that I enjoyed, but I decided to whittle it down to the best Five.  Let me know if you agree or disagree in the comments.  They are in no particular order.

I saw Scythe set up at the UK Games Expo this year and thought, “Hmm, interesting.”  And then I walked away.  Then a friend got it and I played it.  And I was blown away.  It was amazing.  Set in an alternate Europe in the decade after the First World War, Europe is in tatters.  Various factions have emerged all seeking to survive and gain access to the mysterious city-state, “The Factory”.  The Factory interfered in the War supplying Mecha to every side, and has since closed its gates.  The various factions fight for survival, attempt to rebuild forces and gain access to The Factory.   Scythe is a game of BattleMechs and Resource Management.  Very little combat actually takes place, the game is about rebuilding your infrastructure and outmaneuvering your opponent in the hopes that you can upgrade your various capabilities, rebuild your forces and gain access to The Factory.  The game is more about tension than explosive excitement, and that, along with beautiful artwork, is why Scythe makes into the Top 5.

Click on the hyperlink to read my full article about Scythe

I had never heard of Time Stories until one of my friends mentioned it on one of our club nights.  We were told it is a sort of time travel Quantum Leap meets Source Code, where players take the role of Temporal Agents, going back to some critical point in the timeline to correct something that has gone wrong.  There is also a bit of a Groundhog Day element to it as you actually can fail the scenario, but then return to the moment it all starts and try again.  And using your knowledge of what has gone wrong in previous attempts you might do just a bit better this time.  Of course there are limit…

The game comes with an Asylum based story where strange goings on, which might be described as of an occult nature, are occurring.  Players explore the Asylum using the game’s ingenious map and discovery system, gathering clues and unlocking locations and events.  Add to this sense of building narrative and the thrill of discovery, the artwork on the cards is pretty awesome and there are multiple expansions available for play.

No list of my Top 5 games of this year would be complete without Twilight Imperium.  Granted, I only got to play it once this year (which I am imagining, given how involved the game is won’t be that unusual), but it was amazing fun and so it makes the list.  Twilight Imperium, now available in its 4th Edition from places that sell stuff though I am quite happy with 3rd, is a game of Space Grand Strategy where each player controls an entire space-faring civilization taking it from their home system, through a randomly generated Hex Tile Galaxy all the way to Mecatol Rex, the seat of the Galactic Senate.  I love how in depth this game is, given that it allows players to trade with each other, build fleets and armies, and also to upgrade their technology through scientific research.  It is everything I love in a Space 4X video game, but in a boardgame.  And you can play it in about 3 or 4 hours (with 3 players at least, more players means more time) which you struggle to do with 4X Games.

Twilight Imperium is not a game for a group of folks who just like a bit of casual fun, whose attention doesn’t hold past the hour.  It is an in depth game, which I love, with a huge amount of detail and control given to any player.  A definite must.

Roll for the Galaxy

I am well aware that not all of my friends like this game, but I love it!  Roll for the Galaxy is a game of Space Empire building where players roll dice, each die representing a specific unit of population, and then assign them to the various phases, Explore, Develop, Settle, Produce and Ship.  All of which is done in secret.  Players then each, secretly, activate one phase before revealing simultaneously what they are doing on a given turn.  Players that have workers assigned to a phase activated by any player get to do that job.  And those that don’t, well they go back in the cup for future turns.

I love this game as players build up their empire adding tiles that represent new planets, and thus new populations or even scientific advancements that have a persistent positive effect on the empire.  It feels very much like a 4X game, but simplified.  And, the game is very tactile, each round starting with dice in a plastic cup which you roll.  And who doesn’t like the sound of dice rolling in a cup?

And finally on this list is the Marvel Deck Building Game, Marvel Legendary.  This game is a very thematic game where a villain Mastermind is chosen, and evil scheme is chosen and then the villain deck is built.  An assortment of heroes are selected to form the Hero team that stands against the villain and they are shuffled into a Hero Deck.  Players start with a squad of SHIELD Agents and Troopers, which are used for recruiting heroes and attacking villains respectively.  Play then starts with the top card of the villain deck being revealed.  If it is a villain, it enters “The City” which is a five box representation of New York.  Each time a villain enters the city they may ambush players, and they will push every other villain in the city along one space until eventually they start pushing villains out of the city.  When that happens, they are considered to have escaped and bad stuff happens.  And, if the villain card is not a villain but a Scheme Twist – well, that means that the evil scheme just got a bit worse.  Fortunately, as the game progresses, players can recruit hero cards and really start tackling the villains.

What I love about this game is its near infinite combinations of villain, scheme, henchmen and heroes.  You can put together the most random caper ever, or build game around a specific theme.  One of my favourite theme games was Mr Sinister tries to abduct baby Hope Summers.  Only to find X-Force is in his way.  That was a fun game, and I am pleased to report Baby Hope was saved and X-Force Wolverine managed to get the bloodstains out of his uniform, but the carpets and furniture needed replaced.

There are a number of games I would have liked to include on this list, namely Descent, Game of Thrones LCG, Dragonfire and Star Wars Armada.  However, I rejected each for different reasons.

Sadly I didn’t get to play Descent this year, and though it did get to come out of its cupboard for some sorting and photo shoots for other blogs, the fact that I didn’t play it disqualified it.

Game of Thrones LCG got a fair amount of personal attention from myself in terms of building decks so that I could play it, but I didn’t get much opportunity to play test.  I got some, but not very much.  Perhaps next year.

Dragonfire nearly made the list but much of that was playtesting and fumbling around the rules until I was able to play the basic quickstart game.  As such I have yet to play the full game, but I expect it to make it onto next year’s list.  You can read about the fumbling about by clicking the hyperlink to my full article about Dragonfire

And Armada.  I have played that a few times and regulars know that I have built up my Imperial Fleet.  And I did consider calling this my top 5 tabletop Games, but that is too broad a category as in my mind that also covers RPGs.  And I wanted this to be about boardgames.