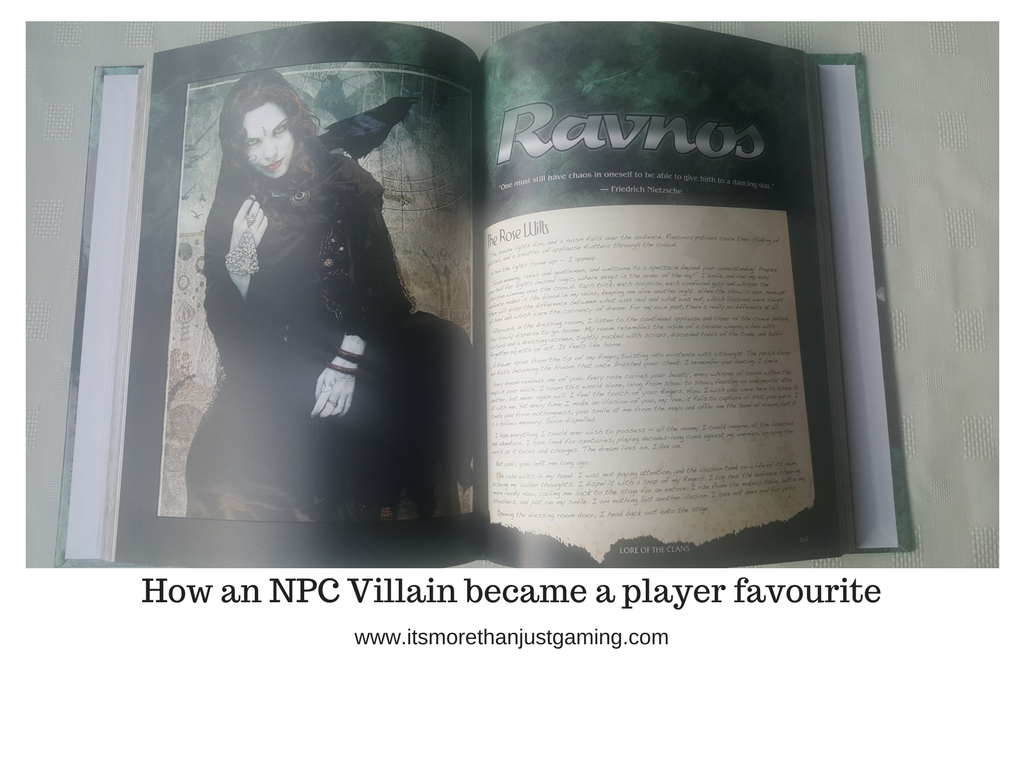 Hello folks.  Today I decided to be a bit indulgent.  I am going to talk about an NPC (Non-Player Character) I invented for one of my Vampire: The Masquerade games.  He was the villain of a story that spanned a few sessions, though as it turns out the players all really liked him and he was able to talk his way passed them, sparing his life.  I am writing this post as I saw a post by Goluptious Geek which reminded me of him, and it inspired me.  I have included an excerpt of the original post so you can read and go back to the source.  And then, come back here and read about Heinrich, my roguish Ravnos.

He Was Pretty Strong: When Your Party Falls in Love with a Throwaway NPC
Any game-master knows that not every non-player character is equal to another. Some of these characters have a great deal of time and effort put forth into their personalities and mannerisms. Others however… not so much. Not every peasant and beggar needs their own stat block. Some game-masters choose to do this, and even I have in the past, but I think most of us grow out of it once we realize that a majority of these characters will never be paid any attention to, or even interact with the player charterers. But sometimes the players take an unusually high amount of interest in these unnamed props that decorate our worlds. When this happens, suddenly the NPC needs a name, a history, a reason to live. This is easy to make up on the fly. What isn’t as easy is when the party falls head over heels for the new character, and wants to have them on all their future adventures. Especially when the NPC isn’t likely to survive very long. This is exactly what happened to an unnamed farmer NPC that assisted my party in vanquishing the manticore that was terrorizing his village.

via He Was Pretty Strong: When Your Party Falls in Love with a Throwaway NPC – Goluptious Geek Blog

Do take the time to read the original article, it is worth your while.

Done?  OK.  So, I was (and still am) running a game of Vampire: The Masquerade, and I had a scene in mind for quite far into the story.  It hasn’t happened yet, so I won’t divulge (and it is likely to change anyway).  That scene required a specific type of a character, someone who isn’t exactly an angel but nor are they a villain.  Basically I wanted a rogue character with charm and an unerring ability to get into trouble and talk their way out.  And I wanted the players to stumble across this character at that point and think, “Oh for goodness sake, not you again!”  That required that the character show up earlier in the story so I got to thinking.

I was never a huge fan of the Ravnos Clan in the game but it seemed right.  So I went off and did some reading and discovered there was a lot I didn’t know, and a lot to like about the Ravnos clan.  I was sold.  Given the plot at the time was that the players were being toyed with by a more powerful vampire (a manipulator, not a fighter) I decided this Ravnos was of the Warrior Caste and was hunting the player’s enemy.  I created a history for him, made him of Prussian descent (German before Germany is an oversimplified explanation of Prussian) and even made him a military officer.  He was embraced, became warrior caste and I gave him some quirks.  The end result was someone that might be described as dashing, a swashbuckler, a lovable rogue and so on.  He was also a bit of a lady’s man.  And thus Heinrich was born.

As part of his history I also decided that he had been in the city before, fifty years ago hunting another monster.  And at the time he fell foul of the local Prince, who ran him out of town.  Ravnos are seen as a clan of troublemakers and thieves.  It is a bold move to run a one out of town as they usually come back really annoyed and with friends.  Fast forward fifty years and that was what happened.  Heinrich, being a dutiful hunter of monsters stuck with his hunt and his duty despite seething at the treatment, so when his hunt brought him back that was perfect.

I set up a story where Heinrich was in the city, hunting a character who the players eventually learned was called “Strife”.  However, Heinrich had his big boy pants on (most of the time – womaniser, remember?) and was able to multi-task.  So in the midst of hunting a monster, his desire to get his own back on the local Prince manifested.  And as such he set up two of the more aggressive clans in the city to go to war with each other.  And that was where the players came in.  Opening shots had been fired, though so far it was a war of proxies.  One side controlled the local Irish Mob.  The other side controlled Law Enforcement.  At the center of it all, a murder (faked by Heinrich) that framed the top Lieutennant of the Irish Mob.  So, naturally the local Law – thinking they had an open and shut case – sent an army of cops to arrest the suspect, which the Mob took umbrage at.  Particularly as this time they weren’t actually guilty (of that particular crime).  Retaliation and escalation occurred and the players were brought in.  Some were brought in as body guards for the DA (the game takes place in a fictional American City) whilst others were recruited by the mob to find the one witness who apparently saw the whole thing and had promptly disappeared (Heinrich arranged that too).

There followed a hilarious few game sessions where players ran around the city like mad things, avoiding cops and gangsters finding clues that pointed at a set up by a European that happened to frequent a specific diner, leaving with a different girl every night.  The players eventually found his lair underground, decorated to look like something out of a Turkish Delight advert (lots of silk and comfort.  In a crypt).

The players challenged him, and he tried to lie his way out.  They didn’t believe him and they fought.  And despite being formidable, he had no desire to kill them (particularly as two of the players were female with appearance ratings 3 and 4 out of 5 – I did mention he is quite shallow, right?)  Heinrich surrendered and offered the truth.  Not the whole truth but enough of it.  He convinced the players he was on their side regarding Strife and that he would cause no more trouble.  He also, using his illusion casting ability of Chimerstry offered them the opportunity to kill the mastermind behind the war (he had been using a duel identity and was seen in various places wearing a different face so that alibi would work.)  He even said that the players should tell the prince the person they defeated was working for none other than Heinrich.  That way the Prince, who hated Heinrich already, would vent all his fury away from the players.   (See, he was looking out for them…) The players went along with it though some were less happy that he had stirred up a war.  And that was that.  Heinrich didn’t find Strife but did get his own back.  And the players got away with letting him escape, though often came to regret it every time something weird happened.  When that happened it was usually only a matter of time before someone would say something like “It’s that bloody Ravnos again…” one part exasperated and one part amused.  Once, they even tracked him down to demand an explanation (he was unexpectedly innocent this time) and found his new lair.  They knocked on the door which was answered a minute or so later by a barely clad and disheveled Heinrich (he had company).  I think, given that he had no clue what the players were asking about and he was in the middle of something else that held his attention that is probably the only time the players had the upper hand on him and it was really funny to play as the players were more than happy to keep him away from his guest for as long as they needed to.

Heinrich has shown up several times since then, more often than not as an ally against the player’s enemies.  But he is just mischevious enough to be causing trouble as well and the players never forget that.  And they love him for it.

What NPCs have made their way into your player’s affections?  Or are you a player?  Which NPCs hold your attention the most?