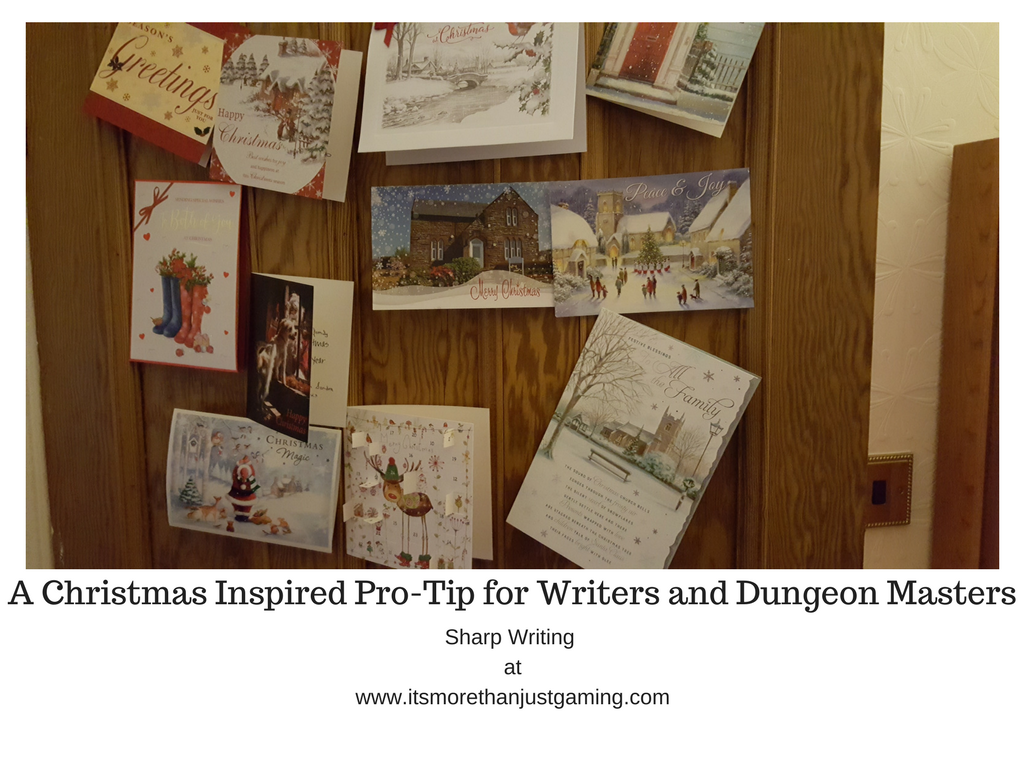 Hello everyone.  In less than a week it is going to be Christmas, and whilst I am aware not everyone in the world celebrates this holiday, I wish you a Merry Christmas anyway and hope you receive this in the spirit it is given.  I wont be shutting down over the festive period, though for obvious reasons I won’t be posting on some days, but today is not one of those days.  Today I wanted to share a Pro Tip for Writers of fiction and Dungeon Masters, and I wanted to do it today as this post was inspired by the festive period.  Let me explain.

I was surfing youtube watching music videos as I sometimes do and I decided to have a listen to one of my favourite Christmas Songs.  It’s the Weird Al one.  If you have a sensitive disposition, perhaps don’t watch the video…

Yeah, one of my favourite Christmas Songs is The Night Santa Went Crazy.  I make no apology about that.  And I suspect you have to be scratching your heads about what sort of inspiration I drew from this.  It is quite simple really.  For all that the song is deliberately gratuitous and ridiculous, it does give an insight into the genesis of a villain.  As much as the song is a spoof, you can draw a line in your mind between the Jolly Fellow who brings toys and joy, to the cynical sociopath that destroys his workshop and goes on a rampage.  There is the repetition of the task year in and year out, and whilst Father Christmas is traditionally paid in shortbread and a wee drink, anyone would have to wonder at what point does a person become disillusioned with their lot in life due to a lack of appreciation.

That is the specifics on the case of the Weird Al song, now I propose to move back to a more generic viewpoint so that you can use this when writing villains for your stories or your games.  Villains have a reason to do things we perceive as villainous.  They might even have been one of the good guys once, but there are any number of things that could cause a person to snap, to break the rules and become the villain of the piece.  To put another way, a villain does not always do things simply to be evil.  They do not commit heinous acts due to a belief in evil.  Some do, but the point is that not all of them do.  And even those who believe in Evil must do so for a reason.

Have they lost something or someone?  Do they blame someone for this loss?

Do they see a bigger picture than you?  Have they tried it your way?

The previous two options can easily be used as the basis for a villain that is sympathetic, someone that would be the protagonist under other circumstances but has been driven by desperation to commit acts that violate laws and morality.

What about their environment?  Have they constantly been trodden on by society?  What other hardships have they suffered in life?

With that example you could have someone not trying to fight the good fight in an extreme way, but rather someone who is trying to just break stuff and hurt people because that is what has happened to them.  You have a less sympathetic villain, even if their story is a tragic one, but one who is willing to cross more lines and is not even remotely interested in being reasoned with.

What about someone whose childhood has been less than ideal?  It is my understanding that when you are a child synapses form in your brain based on what your experiences are, and the older you get the harder it becomes to retrain these synapses.  If a child experiences a childhood absent love and compassion, then they are going to grow up with significantly impaired capability in this area (this is my understanding from discussion with a Teacher whose specialty is special educational needs – if there is error here, it is undoubtedly in my understanding).  In fact, if the child grows up seeing cruelty used as a means to achieve outcomes rather than being reasonable, then is it not reasonable that the individual who suffers that and survives wants to lash out a bit.  And even if they don’t, if their only experience is hardship and cruelty to achieve objectives, then what other methods are they even capable of using themselves anyway?

To boil it down to its most simple.  Villains exist for a reason.  To take another step back and be more general still,  every character has reasons to be the way they are.

And if you want people to fall in love (or hate) with those characters, you need to know what those reasons are.  It might be that you never reveal the background (at least not explicitly) but if you know it, then it guides your writing (or delivery in an RPG).  If you know that your character was an honourable officer in a military, and served with distinction and gallantry during a time of war that character will act in a specific and consistent way.

If on the other hand when they were a teenager they set a fire that got out of control and burned a building down, that will impact on how they are around people – whether they were caught or not.

Think of the reasons your villains, and other characters are the way they are.  If you know their backstory you will be able to tell their current story with fidelity and consistency.

Let that be my gift to you.