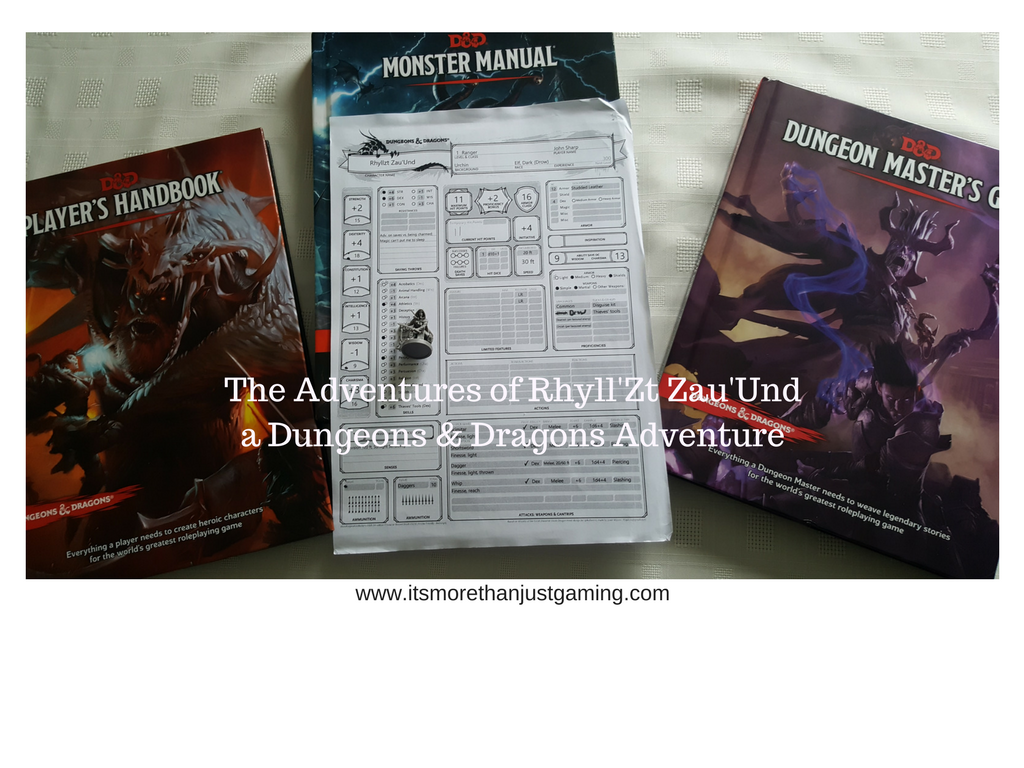 Hello everyone, and welcome.  Today I am going to be posting the final part in my Dungeons & Dragons game, where I played a Not Drizzt Drow Ranger.  If you need to catch up on the previous parts of my exploits, you can click on the links below.  Then, read on!

When last we left our heroes, we were in a cavern of plant monsters, confronted by the founder of the town, our enemy the entire time.  We rolled initiative and our nemesis trapped Nanoc in a grasping vine.  He then retreated and a planty monster like the evil version of Swamp Thing appeared from the vines, about 60 feet away from us.  And it advanced.  Our Tiefling associate was first in the combat order and closed the gap unleashing her Witchbolt into the target, a continual burst of lighting.  Watcing the Tiefling circle to the left of the target, I went right (Yay, Tactics!) and started flinging daggers at it.  (I got a good Hit).

Our Gnome Started firing arrows from her Shortbow, distracting Swamp Thing as the Dragonborn ran up to Nanoc, and began wrestling with the vines holding him.  The strength of the two barbarians was proof against the plants holding him, allowing our biggest tank to pull himself free and charge into combat with Swamp Thing.  The Dragonborn followed suit, the gnome continuing to fire and the witchbolt continuing to strike.  It turns out Witchbolt is a strike from above, held by the spellcaster’s concentration that does continual damage.  (I always thought the Emperor’s Dark Side Lightning, but ok) Given we usually equate witchbolt to an “I am the senate” moment from Revenge of the Sith, we imagine that the spellcaster spends the time cackling wildly in order to maintain the blast.  I was able to close with Swamp Thing and began slashing with my scimitar.  Another good hit and, as it transpired, my last good hit of the night.  However the party’s morale was high, as Pete – the Nanoc Player – had theme music for most of us for when we landed good hits.

Nanoc’s Music – Flash Gordon, the part where the Hawkmen Board War Rocket Ajax (The music starts just after the Captain gives the command, “Stop all engines, prepare to repel boarders”).

For our Dragonborn, it was the John Cena walk on music.

And for me it was Star Wars Disco version.  (I was kinda hoping for the Klendathu Drop from Starship Troopers. Would you like to know more?)

Of course you want to know more, it’s Star Ship Troopers!  Still, John Cena and Star Wars Disco was pretty awesome combat music.  Unfortunately we never got to hear the music for the tiefling or the gnome.  Or the healer supplied to us.

Our fight became a very condensed mob.  Nanoc rammed a spear through one shoulder to disable Swamp Thing’s arm.  I tried to pin the other with my short sword.  I failed.  Fortunately, the John Cena music started playing and said arm was crushed beneath a Dragonborn wielded Great Maul.  Our Gnome got into position and began a rapid succession of backstabs, whilst the Tiefling lost control of Witchbolt, but still had a fire spell and tried burn Swamp Thing to Death.  A vine snaked out of the wall and sunk into the beast, which we assumed was going to heal it.  However, we rightly figured that we could do more damage than it could heal.  Possibly foolhardy, but we also figured the vine wouldn’t have arrived to aid the beast if it wasn’t already badly wounded.

Ultimately, it was the Dragonborn Great Maul that smashed our adversary to bits. De Doo Doo Dehhh!

With the demise of Swamp Thing, the villain reappeared.  He was furious with us for defeating his champion and began his evil villain monologue to explain everything.  Or he would have, if Nanoc hadn’t thrown a Javelin at him as soon as he opened his mouth.  And I threw a dagger at the exact same time, probably the first time the brute and I were on the same page about anything.  The dagger missed (Embarrassing as I have a plus 6 to hit on dagger throw…) but the javelin did not.  Villain monologue became villain gurgle.  He tried to speak again.  We threw weapons again both missing.  We suggested initiative might be appropriate at this point as Rhyll’Zt was impatient to be done with this, and Nanoc was impulsive.  Initiative was sorted again, and we continued harassing the villain until it came to the Villain’s turn.

The GM was pleased, “I can do my monologue now!”

In the end, we simply did not get the monologue and the Dragonborn mashed the villain to the sound of John Cena.

With the passing of the villain, all the roots began to melt, and the ground shook.  Crap, we all thought.  Cave in!  We needed to get out fast.  At the end of the chamber there was a pool of water.  Nanoc and Rhll’Zt figured there must be a channel leading to the surface, so we dove in whilst everyone else fled up the tunnel the way we came in.  Nanoc and I discovered the water was quite shallow and the channels available were too narrow to get out.  Fortunately, our Patron spoke at that point in the form of a booming voice.

“You have solved the mystery of the village, but you appear to be about to die by cave in.  I shall remedy that.”

We then disappeared from the cave and reappeared in the village.  The villagers were out and they were celebrating the end of their ordeal.  And then they began to fade from sight, along with the village.  Our patron spoke again.

“Well done on surviving this test.  I have been searching for a team capable of dealing with the various evils in the world.  Your team is the first one to survive my challenge.”

My response to that was, “Good grief, what clowns have you called on in the past?”

“Other adventurers.  They failed to save this village, my creation, where you succeeded.”

“Get these stones off our neck now,” I replied.

Before I could answer that we were back in the tavern where we were recruited in.  There was a black robed individual at our table, our patron.  The stones popped out of our necks.  And our patron spoke.

“The village was my creation, a test for those like you.  I now give it to you as a gift.  Touch the stones and will yourself there, and you will find yourself transported to it.  You will have access to all of its services whilst there.  You can rest in safety.  You can get food or even repair your gear.  The only caveat you can only use the village for 4 days a year.  Well done on your success.”

And then he was gone and the curtain fell on the story.

I have to say I enjoyed the campaign, short as it was.  Despite our group being very different we worked reasonably well together, and are now bound by a common stronghold.  I liked that as a magic item/quest reward, having our own little village.  I can see it being really useful for further adventuring, and I sincerely hope that we get to trot these characters out again in the future.  No pressure Chris.

Incidentally, in coming weeks I will be posting an interview with Chris, our GM for this campaign as it was his first time and I thought it would be useful to share his first time insights.

3 thoughts on “The Adventures of Rhyll’Zt Zau’Und – A Dungeons & Dragons Adventure. Part 4 (The Finale)”