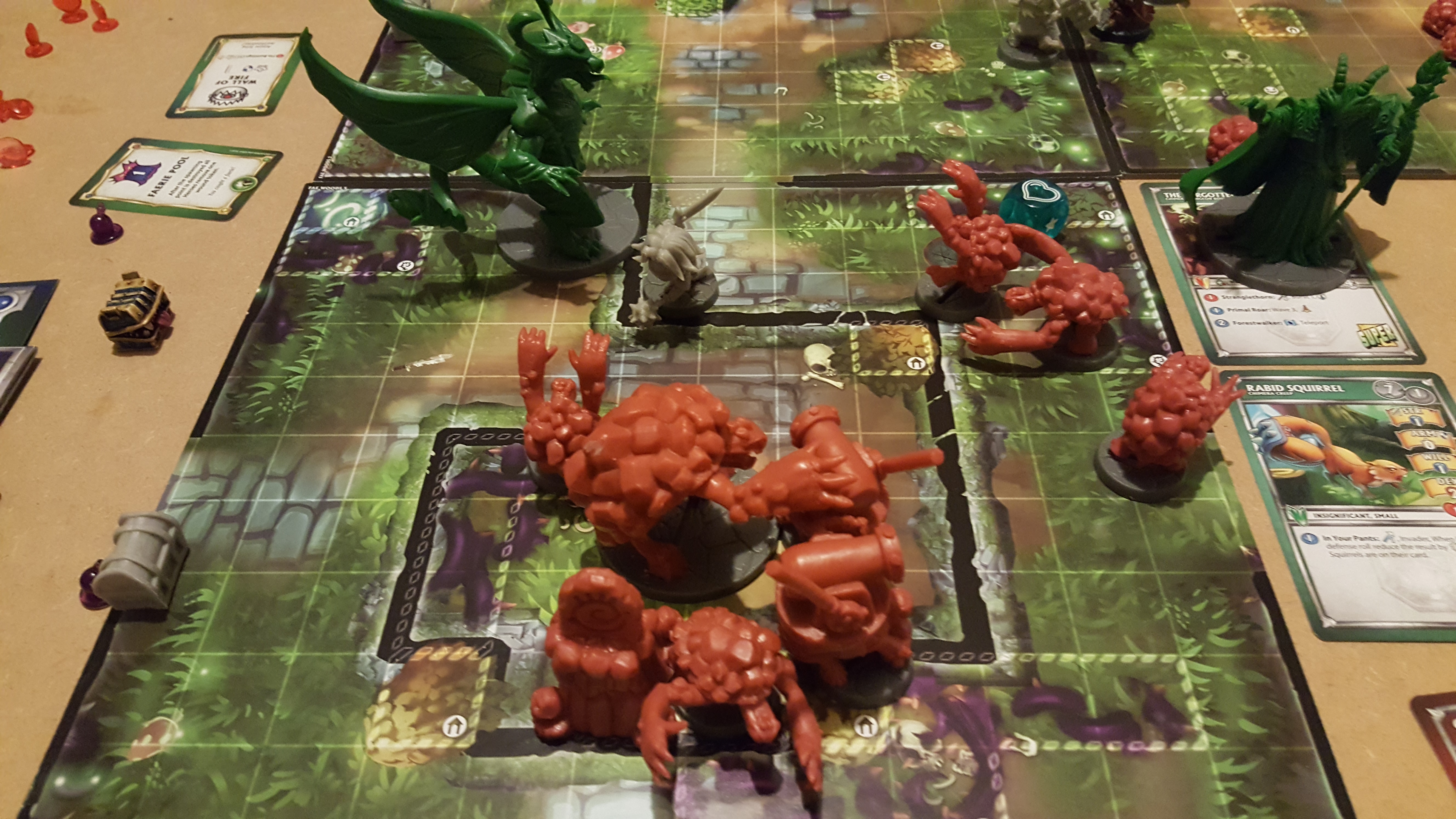 Hello everyone, welcome to you.  Today I am going to talk about Kickstarter.  If you have followed me for a while, or watch my twitter feed for all the historic posts, you will be aware that I have backed a few Kickstarter Projects in the last couple of years.  This was made up of a selection of boardgames, roleplay games and even a videogame.  I really enjoy the idea that I can help creative folks bring their new ventures to fruition, something that previously would have required established wealth or mortgaging things that you sensibly don’t mortgage.  I like that I can be part of a community supporting innovation and creation.  Of course there are ups and downs of being part of the crowdfunding sensation.

Probably the first thing I backed on Kickstarter was Super Dungeon Legends.  This was back in the latter part of 2015, with estimated delivery of 2016.  I already owned Super Dungeon Explore and particularly enjoy the video game themed dungeon crawler.  I prefer playing the consul, which is the equivalent of the Dungeon Master, as I always found it more interesting than playing as a hero.  And whilst the game does have an arcade mode set up to be players versus the game, frankly, the rulebook for the version I own is laid out so poorly that how arcade mode runs is still a mystery to me.  And I studied English Literature and read some of the most pretentious wordiest academic journals in the world.  The rules were almost as difficult to read.  I was quite excited when I heard about Super Dungeon Legends as it was intended to add a campaign element, the one major thing that was missing from SDE.  So, when it came out on Kickstarter I signed up.  I signed up for Legends, I signed up for Second Edition Core, for the extra bosses and warbands.  And Since a lot of people did the same, including two people I know, they made a phenomenal amount of money on the Kickstarter meeting stretch goal after stretch goal.  And the Stretch Goals were pretty good too.  New MInis, Adventures for legends, some other cool stuff.

Understandably, it funded.  I was excited as I was getting a hell of a lot for my pledge.  I was less keen on the year wait, but that is something you just live with when you are a crowd funder.  November 2016 came and went.  No Delivery.  There was a parade of updates, new rules tweaks that were put out to the community to play test to aggregate and so on, but no delivery.  It is now November 2017.  Delivery isn’t looking likely until the middle of next year or thereabouts.  Maybe spring for the first wave.  That is near 2.5 years after the kickstarter and 1.5 years after estimated delivery.  And I was becoming increasingly irritated at the situation.  There have been recent updates outlining the reason for the major delays, some of which is understandable (one of their key folks was really ill this year) but not acceptable (The project delivery shouldn’t turn on one person alone).  Sadly, the constant delays and what I perceived as excuses soured my excitement for the project.  Added to that my living circumstances have changed in the last year.  One of my friends backing the project lives relatively close and I know he wants to run a campaign when it eventually arrives.  It occured to me that the likelyhood of me ever needing my copy was falling, so I made a really unexpected decision.  I decided I would pursue a refund.  I contacted Sodapop Miniatures through their kickstarter page at the begining of October.  As of the start of November, they haven’t replied.  However, I found another method of contact, an email address.  My initial contact was positive enquiring if a refund was possible.  My follow up message ten days later was a bit irritated.  By day 21 I was downright annoyed.  I got a reply on the email within 36 hours.  A refund was possible minus paypal charges etc.  Good.  No apology for ignoring my initial query, no explanation either (Sorry Mr Sharp, that mailbox isn’t monitored regularly as Kickstarter has finished blah blah might have almost been understandable, but nothing).  I also recieved apologies in advance for the delay in processing refunds as it takes time.  Maybe even a long time.

I try to keep this site positive and upbeat, however, equally important to both of those things is I want this site to be an honest reflection.  I was excited for Super Dungeon Legends.  Now, I have no particular need to play it.  I daresay I will enjoy it when my mate finally recieves it.  And when I play my copy of SDE, I imagine it will still be enjoyable.  However, I don’t think I will be backing any Kickstarters or financially Supporting Soda Pop miniatures ever again.

That was the downs of the situation I was talking about.  Let us move onto other things more positive, upbeat and honest.

Two other Kickstarters that I backed had news this week.

Beckett’s Jyhad Diary was the biggest piece of news.  From a name like that you are probably wondering exactly what sort of stuff I look for on Kickstarter.  Beckett is a character in the rpg Vampire the Masquerade, a Major NPC Archaeologist Vampire that crops up in the game metaplot a lot.  You even encounter him in the game Vampire: The Masquerade Bloodlines for a brief chat.  Beckett’s Jyhad Diary is his journal from his travels across the world tracking the Jyhad between elder vampires, and the approaching end of days.  Basically, it is a book of In Character source material to help Storytellers get a feel for the world.  The Backer PDF was distributed this week, which I have been expecting for a while but actually snuck up on me.  Normally I read the Onyx Path Monday Meeting notes every week to see what their new releases are scheduled, and the production stage of things I am following.  I actually forgot this week so when I logged into my emails, and found the email from the project creator saying that I had new content waiting for me relating to Beckett’s Jyhad Diary, it came as a pleasant surprise.  The fact that the backer PDF was 561 pages was also unexpected.  I was expecting something around the 300 page mark, which would be a lot of metaplot.  560 is phenomenal.  I don’t expect to get the physical book for a while but I have started reading the pdf on Kindle and you can expect a World of Darkness Library review in the nearish future.

The Second positive update I recieved this week was that the EU stage of shipping/delivery for the reprint of Gloomhaven should occur around the 4th November.  Gloomhaven is a campaign based Dungeon Crawler with a bit of a legacy element in it in the form of a map that is updated with stickers as players advance through the campaign.  I am quite looking forward to Gloomhaven as it looks like the action part plays like a small Descent Skirmish, the outcome of which impacts the level of the titular town where the heroes are based.  I had mixed feelings about recieving the game around about the 4th November.  In the first instance, I am excited for anything new and shiny to arrive that I can play and write about.  Unfortunately that is also the date I am away from home dog sitting for my sister.

That is the dog I am looking after, Thrift.  That photo was taken five minutes after we got him to stop mating with my arm…

I am looking forward to the arrival of Gloomhaven as I think it is going to be a really cool game, and you can expect a blog post about contents.

So, ups and downs.  By the end of the week, my experience of Kickstarter itself is still positive and whilst  I have no real intent to back any more games, it certainly isn’t impossible.

What experiences do you have with Kickstarter?  And did you back any of the things mentioned?

2 thoughts on “The Ups and Downs of Kickstarter”