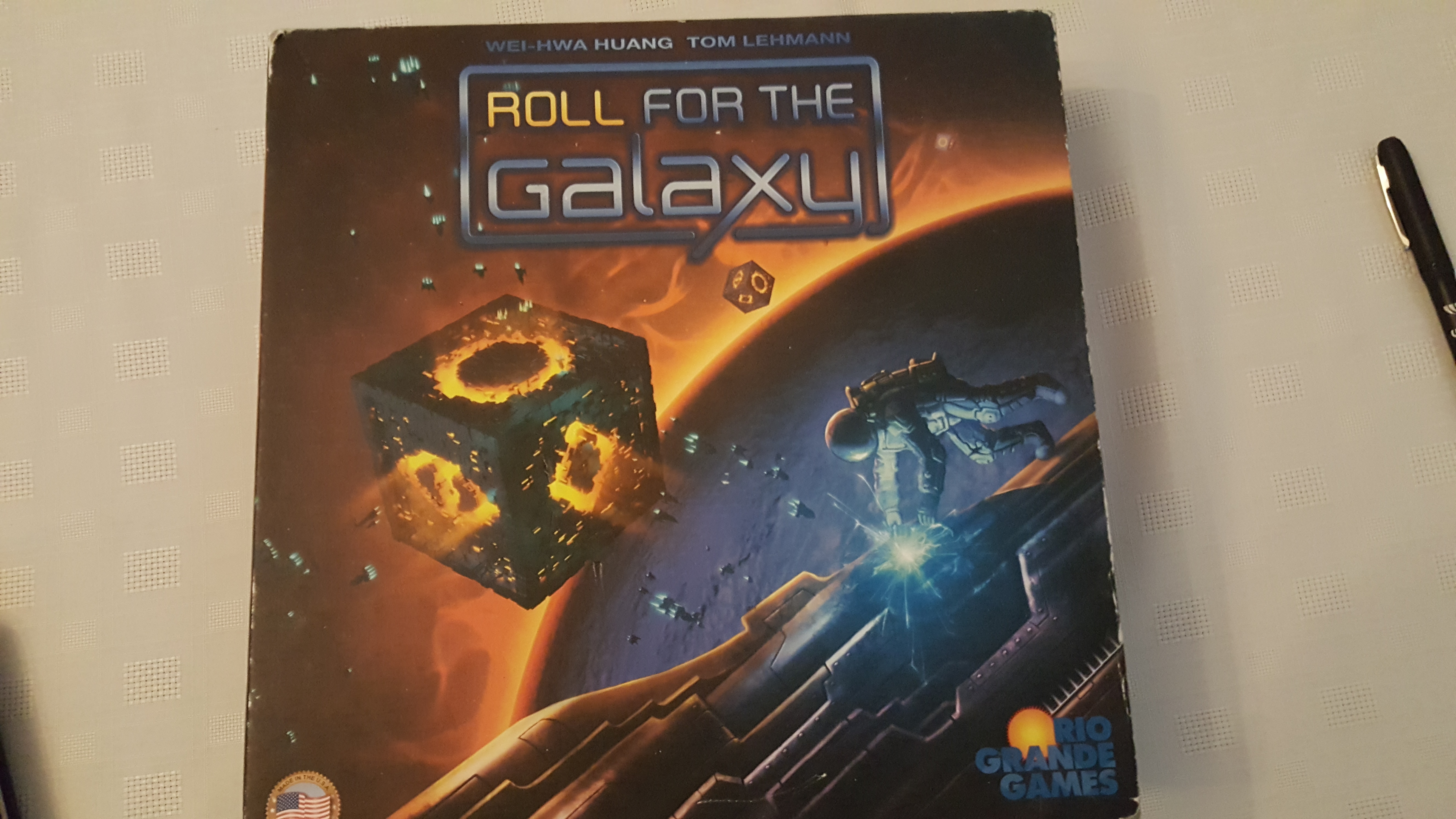 Hello folks, and welcome to one of my Games Night posts.  This time I am talking about the game Roll for the Galaxy.

Roll for the Galaxy is the Dice Rolling Successor to Race for the Galaxy, a card game by Rio Grande that has been out for quite some time now.  Having never played Race, I cannot directly comment on it though I am assured that Roll for the Galaxy actually feels very similar, and in some respects plays more smoothly.  So, let us talk about the game.

Object of the Game

Each player controls a faction and a homeworld, ranging from space pirates to gene splicing aliens.  The Faction and Homeworld give the player some starting abilities, and perhaps some extra dice beyond the starter set.  Players then take it in turns to try and expand their space empire, through exploration & colonisation, garnering advantages by developing scientific advancements and trading or consuming goods through the galactic economy (Galactic Economy is not a game term, rather it is a term I am using to explain for folks unfamiliar with the game).  The game ends on the turn that a player builds their twelfth tile (With the Homeworld and Faction counting as their first three), and the winner is declared based on final victory points – gained from colonising expensive planets, or developing expensive tech, and by trading your goods.

For the purposes of this article, I am going to include the core set of Roll for the Galaxy, and the Tiles and Dice from the expansion Ambition.  Each player starts with an empire control board, a worker/dice allocation strip (not using game terms, using my own again), a reference screen which also doubles as a privacy shield for dice rolling, a dollar meeple placed on the $1 marker on the empire control board, a cup with a black and two white dice, two additional white dice on the citizenry area of the Empire control board, a Homeworld, a Faction, a world to be colonised and an advancement to be developped in the construction zone plus any additional dice or enhancements dictated by their homeworld or faction.

Players are now ready to start.

The cornerstone of this game is rolling dice.  Players roll however many dice are in their cup.  I should point out that the dice do not have numbers on them, rather they have the symbols of the five phases of the game, Explore, Develop, Settle, Produce and Ship.

Players roll their dice and then line them up against their worker/dice allocation strip.  Think of each die as a unit of population ready for work and the symbol that is visible represents the work they are going to be doing.  Once all dice are allocated to the appropriate column, one die is moved from under the strip and placed on it – this is the one phase you are activating this turn.

This is all done secretly, behind the privacy screens so no other players know what you have rolled, nor what phase you are activating.  They will have rolled their dice, secretly, and will have chosen a phase to activate independently of you.  Once all players are satisfied, they reveal where they have allocated their dice and what phases are activated.

Each phase activated by a player happens during that turn.  And, any player with workers on that phase – regardless of who activated it – will get to act in that phase should they wish.  So, the trick here is trying to anticipate what phases yur opponents will activate so you can maximise your effectiveness.

Having explained the rules to new players many times, I am quite aware the last paragraph might be baffling to some.  So, Here is an explanatory video.

Now, dice rolling is a bit random, however this is not the end of the story.  There are various developments that allow players to reassign workers (dice) to new phases.  For instance, if you roll shipping on one of the dice and you have no goods to ship then this is die is worthless.  However, if you have a development that can reassign it then perhaps you can put it somewhere more useful.  And, to help things along early game, each player can turn one worker (dice) into a dictator each turn.  This basically moves the dictator to one side, and does nothing this turn – except tell another worker to do something different.  So, you could move your ship dice mentioned earlier to one side to be a dictator and tell a produce worker you want them to be a settler instead.  That way, you have a bit more flexibility than being at the mercy of the dice.

The five phases that can be activated are Explore, Develop, Settle, Produce and Ship.  I will cover these in simplest terms.

Each Die assigned to explore can be used either to gain two Dollars, or to take a tile from the bag.  These are both important abilities.  At the end of the turn, any worker that has been used in an activated phase returns to their citizenry.  Any worker that was not used, such as from phases that didn’t activate or dictators, go back in the cup.  In order to put more dice in the cup, you pay $1 per die.  Whenever your money reaches zero, it bounces back up to one, so you will always be able to hire at least one worker.

Taking a tile from the bag is the first step in expanding your empire.  The tiles are double sided, one side having a planet for settlement and the other side having a development to be developped.  For each die you spend exploring this way you can take a tile from the bag and pick a side,  Place it that side up on the bottom of the appropriate construction zone – this way it is possible to have multiple projects in development or planets under settlement at any given time.  However, they are still completed in sequence.

This action also allows you to discard any tiles in your construction zone that you don’t like.  And for each tile you discard, you can draw an extra tile from the bag.  I made another short video explaining the intricacies of the explore phase.

So, for instance Galactic Investors might cost four dice and until it is completed, the three that are currently on it cannot be rolled.  However, developments have an ongoing bonus, usually something that triggers in a phase, or to do with reassigning workers or in this specific case, generating money at the end of the develop phase.

Settle is exactly the same as develop, except it produces colonies on planets.  And, when a colony is complete, rather than giving a persistent bonus like developments do, you gain another die (or two in some cases), as dictated by the planet.  This is how you build your dice pool.

This phase allows you to put your produce dice on available (empty, non-grey) planets as goods for trade.  Limit of one unit of goods per planet.  These can then be used in the shipping phase.

Shipping is the act of sending goods from your planets either to your own empire or externally.  The difference is, one yields money (depending on the colour of planet the goods were shipped from – yellow is best) or victory points (1, 2 or 3 depending on mtching colours between shipping die, goods die and planet shipped from.)

Ok, so if you want to ship for money this is dictated by the colour of the world the goods are on as stated.  Yellow planets are the best in this respect, being worth 6 money whereas blue are worth only 3.  This information is on the player reference card that you get in the game.  It doesn’t matter what colour dice are involved.

However, for victory points, you get 1, 2 or 3 victory points depending on colours of dice and planet matching.  So, if we shipped from the prosperous world (blue) with Blue Goods and a Blue Ship die as per the image, that is 3 victory points.  If one of the dice was red but all else was the same, that would be two.  If the world was brown but the dice were blue, that would also be two.  If none of the colours match, then it is one.  And, there are certain dice in the game that match everything, or match nothing.  Something to consider.

This game is harder to explain than it is to play.  It is immense fun, starting with the tactile sensation of rolling the dice (and the satisfaction of knowing you are rolling 9 compared to your opponent who might have 3, going on to the fact it feels like a 4x computer game without the combat.  Dice rolling adds an element of chance to the game, however, if players can accurately predict what their opponents may do, then they can activate phases accordingly.  A good example would be hoping for a player to activate shipping, knowing that you are producing this turn.  The game can become quite intense when several players have built trading developments and are farming victory points every turn, or you can slow down a player’s strategy by constantly exploring to the point that 90% of the tiles from the bag are on your construction zone.

The complexity in this game is in the explanation.  Gameplay is simple, though mastery is hard.  I find this is a game I can pull out of the cupboard any night and play and never be bored of it, and thus I recommend to yourselves.