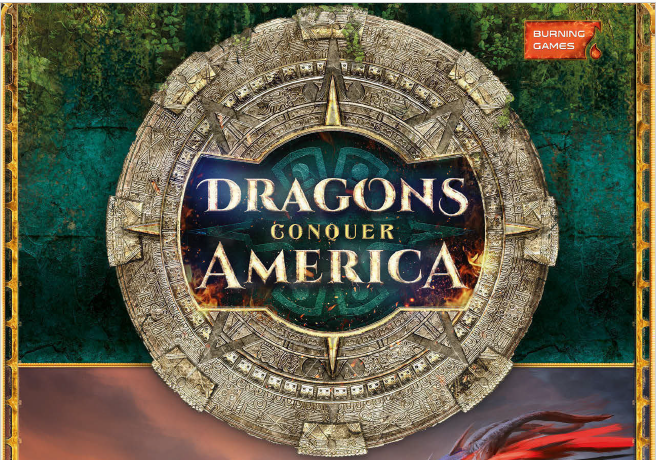 Hello folks.  Today I am going to be talking about an upcoming roleplay game by the good folks at Burning Games.  You may remember them from a previous article I wrote, about their Sci Fi RPG Faith: A Garden in Hell.  Well, they liked the article and have kept in touch since and asked if I would like to GM a starter scenario for their game Dragons Conquer America.  I gladly agreed.  And though I have as yet had no chance to run the game, I have had the opportunity to read through the preview rules, which have an overview of the setting and all the rules and character sheets necessary for Adventure Zero in this new setting.

So, I mentioned Adventures Zero – more accurately episode 0.  The preview pack contains the adventure The Coatli Stone which has been sent to various folks to play in their groups, with a request from Burning Games that the GMs supply the end results of the adventure to them, as they will aggregate the results and it will form the basis for the lore setting up episodes 1 and 2, which are what is being sold at the Kickstarter.  This is a pleasing form of community involvement.  So, let us talk a bit about what the expectations of the game are.

It is the 16th century, and explorers and conquerors have crossed the Atlantic and established outposts in the West Indies, and are looking greedily at the major landmass just to the west.  In these respects, Dragons Conquer America has elements of Historic Accuracy.

However, magic exists in the world.  In fact the team at Burning Games have written a condensed potted history of the world and how it has been influenced by the presence of magic, wizards and even elves and other mystic beings.  Religion plays a huge role, not only in the magic but also in the politics of the world, so for those of you seeking a bit of realism you will find it there.   And, of course there are Dragons.

The crew at Burning Games have re-imagined the tale of St George and the Dragon which leads to the conversion of said Dragon to Catholicism, ridden by the Princess of the fable.  This acts as a nexus point where suddenly dragons are not only a thing, but they are not uncommon in the armies of Europe and further east.  Their presence in every major fighting force in the world ensures a relative state of stalemate.  This state of affairs is not mirrored in the new world, and it is to the Americas that Greedy Europeans with their armies and Dragons venture.  Little knowing that there are ancient Meso-American dragons, significantly larger than their European counterparts waiting in the jungles of South America for them.

I apologise if I am using incorrect words out of their proper context in my description.  My knowledge of the Spanish expeditions/conquests in South America are limited to the TV show The Mysterious Cities of Gold.

The setting so far, and certainly the starter adventure focuses on the conflicts between the Spanish and the indigenous populations, namely the Aztecs with some reference to the Olmec.  (I am simplifying here, quite considerably – there is a lot more too it, and if you scroll down I have included a link to the free preview adventure available via Drive Thru RPG, which has all the details for interested parties)

As with any Roleplay game, players take the roles of characters in the setting.  For the starter adventure, they are a group of mercenaries formerly in the employ of the Spanish though they are certainly not obliged to maintain that allegiance during play.  There are a number of starter characters pre-generated for the adventure to limit learning curve at the stage of Episode Zero, allowing players to quickly get involved in the three chapter story.

I am not going to go through all of the ins and the outs of gameplay mechanics here.  Players will go through a series of encounters where they need to deal with NPCs, fight hostile NPCs and overcome challenges refereed to as Time Sensitive Events.  I got the distinct impression on first reading that the game designers wanted to streamline the amount of challenges requiring the equivalent of a dice roll.  Rather, if it is within a character’s capability to do and is not opposed, either by another character or time/urgency (hence Time Sensitive Event) it is automatically successful.

Dice rolling is possible for this game in terms of combat and TSEs however it is not the intended method.  The intended method of chance and capability is governed by decks of cards.  At the start of every scene, players draw seven cards each (Each deck having 4 suits and 13 cards to a suit, just like a normal deck).  And when they must do a challenge, they select whichever one they wish to add to their score (the scoring system is a tiny bit more complex, but I am not going into all of that today) meaning they can choose to use their highest card, or they can gamble and save their highest card.  This system is also used in Faith: A Garden in Hell  and I have to say, I like it.  It removes some of the randomness and gives the players agency.  Do they put their effort in on the first bluff check of an NPC banking that they won’t need their high scoring card for combat later?  Do they play a lower card banking on their natural skills being able to make up the difference?  I like this choice being placed with the player, though I suspect it might feel strange to players used dice rolling.  At least for a little while.  There is also a prejudice system which seems entirely appropriate to the setting.  Players may wish to fly under the radar and not draw attention to yourself, but bigotry and xenophobia is quite prevalent at this time and the GM might rule that you simply can’t keep your big mouth shut when the inferior NPC starts shooting their mouth off.  Roll for initiative…

I have to say, given that I only had access to the Preview Episode Zero, I was quite impressed.  The setting is interesting.  The system encourages player agency, and you have to love the artwork.  And, the final comment at this stage.  Players that run Episode Zero, The Coatli Stone, who then feedback their results to Burning Games are helping generate the game world.  I love that community spirited-ness.

If you want to have a look at the Preview Adventure and Rules in more Detail it is currently Free on Drive Thru RPG HERE.  Disclaimer – whilst The Coatli Stone is a free product, this is an affiliate link, meaning that if you purchase anything else on your visit to Drive Thru, I get a small commission.

The Kickstarter Campaign Starts on the First of November.  I’m looking forward to seeing some Feathered Serpents in my future!