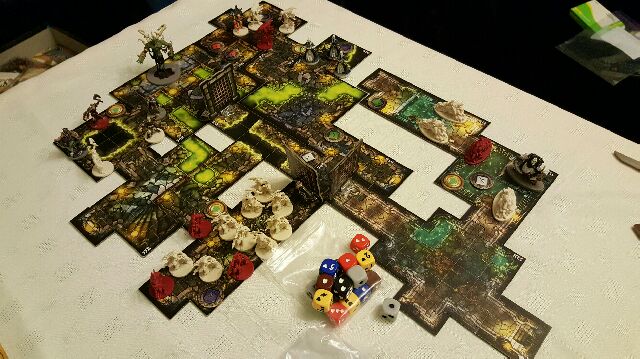 Hello.  Today I am talking about a couple of companion apps/things for the game Descent: Journeys in the Dark.  I will start by sharing another article from the Fantasy Flight Website and then my thoughts about it.  It is for the app Descent: Road to Legend, which is the app for Descent: Journeys in the Dark that allows it to be played without an Overlord/Games Master.   Excerpt below with link to full article, and images relating to the Frostgate Trials are from the FF website.

In the city of Frostgate, the Northern Tribes gather each winter for feasting, celebration, and their most sacred rituals. Amongst these rituals, the Trials of Frostgate stand proudest—tests of courage, skill, and strength of arms, where the proudest and bravest warriors earn tattoos of their totemic animals. Four trials await you—and only the boldest heroes can withstand them all.

Fantasy Flight Games is proud to announce that a new adventure is now available for purchase through the Road to Legend app! Trials of Frostgate challenges you and your fellow heroes to four distinct trials, and each trial is guaranteed to test your strength and your resolve in a different way. Unlike a campaign, which progresses through a story with every new adventure, each challenge in Trials of Frostgate can be attempted multiple times as you attempt to best your scores from previous encounters!

The Strength of the North

As part of the Road to Legend companion app, Trials of Frostgate invites you to experience the danger, excitement, and heroism of Descent: Journeys in the Dark as a completely cooperative experience. The companion app takes over command of the monsters that you battle, leaving you and each of your friends free to become the heroes of Terrinoth.

Weirdly, Descent has not made a major appearance on this blog despite it being one of my favourite games.  In a nutshell it is a fantasy adventure game where players take the role of heroes or Overlord, and play through tile generated maps fighting monsters, looting the place and leveling up.  It is like Dungeons and Dragons Lite -the Boardgame. We haven’t played any campaigns since the tail end of last year though and I don’t tend to play it as standalone adventures.  I like the campaign setting where there is an ongoing story and players (including the Overlord) can level up.  That being said there is a browser based program available on Fantasy Flight Website called the Quest Vault where you can make your own adventures.  And I quite fancy doing that for maybe a short campaign.  More on that later.

Trials of Frostgate is new content for Descent: Road to Legend which I have heard some folk say they quite like.  It allows them to play Descent without the need for an Overlord, and in fact allows solo play if you are so inclined.  Not bad if your really want to play but are struggling to organise a games night when everyone is free.  Truthfully, I never got into this app for two reasons.

Firstly, when I played I selected four heroes that I liked.  Perfectly legitimate in a solo play for the player to have a full party, though the app recommends a limit of 2 heroes.  I realised why soon after.  With a full party it is hard to keep track of everyone’s abilities, and so half the time I wasn’t using the characters to their full potential.

Second of all, and I am partly a victim of my own success here and partly not, the encounters generated are random (up to a point, as far as I am aware).  And even if they weren’t, there is no component and monster list available prior to starting the encounter, so you need to find relevant tiles and creatures and cards and tokens during the game.  That would add a degree of challenge if you own the base set.  For a completionist, even a ludicrously organised one like me, this is a nightmare.  Open a door, find tile 73a and spawn a unit of spider thingies and add 4 tokens.  Where is 73a, I can’t remember what bag the spiders are in and I haven’t seen those tokens this year!  Of course, you can tell the app what content you have – and you can change it so that you can limit monsters and tiles and so forth.  And if the rest is bagged, labelled and organised you can keep flow disruption to a minimum.

All that being said I think it is a cool idea having Road to Legend available to get a bit more longevity out of Descent, and for something like Descent which is pricey – longevity is a good thing.

I mentioned Quest Vault Earlier.  This, I really like.  Anything that promotes the creation of Community content is a good thing in my mind. This allows gamers around the globe to put their creative hats on and build new adventures, using a fairly intuitive setup and tokens that are identical to the game quest book.  It didn’t take me long to put together the following map for a village under attack by Harpies and Razorwings from nearby mountains.

I still need to work on the second encounter however, in this encounter heroes happen upon a village under attack by Harpies, Razorwings and a Manticore.  And the Harpies are abducting villagers.  Players need to escort/carry villagers to the Tavern, whilst the Overlord has to get as many villagers up the mountain pass.  The encounter ends when all villagers are in the tavern or off the board.  The second encounter is about tracking it back to its source, rescuing the villagers and defeating the Witch controlling it all.

The tools supplied are fantastic, though sadly have not been updated for some time so a lot of the content – monster tokens and such – are not included.  This is a great pity as it is limiting.  The final expansion, chains that that rust, is not included nor ar the monster pack monsters.  Not insurmountable but sadly it seems like Fantasy Flight has closed the door on Descent Second edition in terms of updates beyond Road to Legend.  I would be happy to find out I was wrong there.

However, despite the incomplete nature of the Quest Vault there is still a lot to play around with and there are a lot of adventures out there completed free for downoad.

Descent: Journeys in the Dark, Gaming

3 thoughts on “Descent and its Offspring”