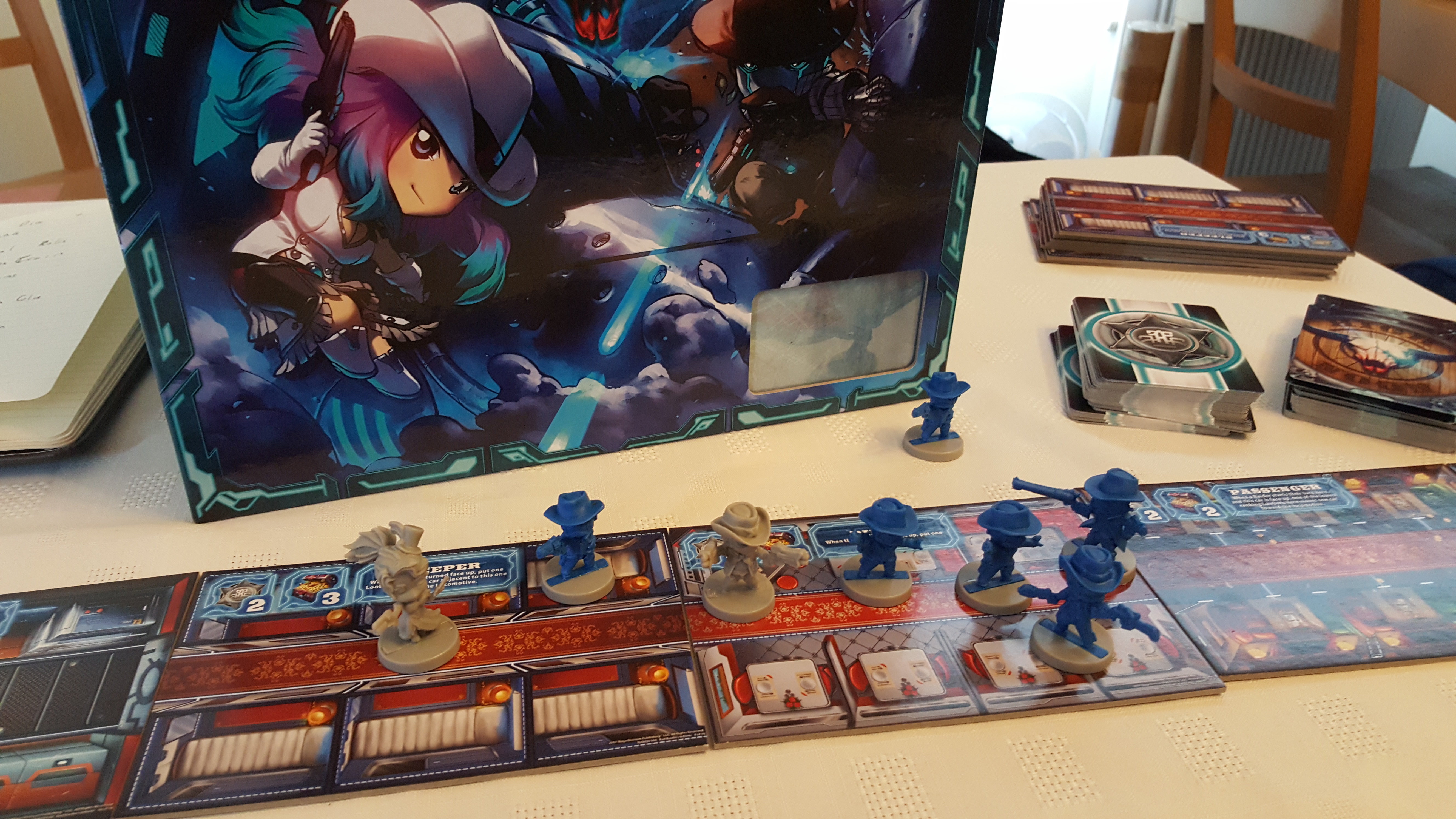 Hello everyone, and welcome to another Games Night article.  This weekend I got to play Rail Raiders, a recent Kickstarter release by Ninja Division.  I should point out, I didn’t back this project, though my friend Jonathan wanted to but missed it.  However, when he found a copy available online post Gen-Con he grabbed it as fast as his mitts could lay hands on it and we played it at the weekend.  Let me tell you a bit about it.  Firstly though, have a peak at the how to play video I recorded so you can get an idea of the game.

Rail Raiders is a game of Wild West Great Train Robbery in Space, with miniatures made by Ninja Division – so, quite similar in style to Super Dungeon Explore.  I seem to recall a TV show from a few years back that was insanely popular called Firefly that this sounds a little bit like, in the same way that Super Dungeon Explore is a bit like Lord of the Rings or The Hobbit.

So, I arrived at the table and was promptly given the rulebook.  Note for future, or indeed anyone planning to play a game that is new.  Someone needs to know the rules prior to game start.  Not just a scan of the book, but actually read the rules.  The Owner was basically familiar with the concept but hadn’t gone too in depth.  So, I tried to read the rules whilst game was set up and then we started.  This wasn’t ideal as the first few turns dragged as no one at the table was entirely sure what was going on, however within about 3 turns and 3 of 4 players all trying to read the rules at various points we got there.  And suddenly the turns didn’t drag anymore.

I chose the character El Cola, one of the Super Dungeon Explore crossovers.

I have to admit, I chose El Cola as I felt like playing a Mexican Bandit from Wild West Movies, and there was plenty of potential joke fodder at the expense of certain politicians.  You can fill in those blanks yourselves…

El Cola also had the fantastic ability that once he has Two Double Dollars looted, he gets to re-roll 2 dice in showdowns.  So, with our players chosen we were asked – do we want to start on the Caboose of the Train (free) or chance trying to jump onto a carriage, which requires a dice roll.  El Cola laughs at risk, and laughs at moving trains…and failed to jump onto said moving train.  El Cola is happy to move to the Caboose on his first turn.

So, the first couple of turns went slowly in terms of understanding the game and also because we drew the worst Long Arm of the Law Cards possible on the first carriage spawning an army of Lawbots.

So, this game is a Railway Heist with the object being to be the person with the most loot at the end of the game.  Lawbots will attack if they catch you stealing stuff, and other players are allowed to shoot you if you search/steal stuff when there are no Lawbots present but another player is.  So, the first few turns no one got loot as everyone back stabbed everyone else.  I realised that El Cola became quite potent at Showdowns if he had money.  However, he couldn’t loot because of the other players.  So, instead he went on a Lawbot Killing spree, as each Lawbot has a cash value if you defeat it.  I lost as many Showdowns as I won, however I was able to get enough money to trigger El Cola’s ability and suddenly the odds shifted.  I was more than happy to enter another carriage with Lawbots and other Rail Raiders, more than happy to join the Showdowns on the side the Law to put my rivals into other carriages so that I could then finish the Lawbots off and loot the stuff.  By doing this I got a fair amount of money by the end of the game and was declared victorious!

Truthfully, we made a few mistakes as we didn’t trigger the abilities of the coaches and none of us managed to get to the engine in the entire game, however it was fun and played pretty quickly.  Certainly faster than Super Dungeon Explore.

This game isn’t on general release yet, certainly not in the UK anyway, as far as I am aware however it is a lot of fun and worth a look if you get a chance.

Thanks for reading.  What are your thoughts?  Are you tempted?

Does this make you hanker for Firefly?

Or were you like me, and just not bothered about Firefly?…