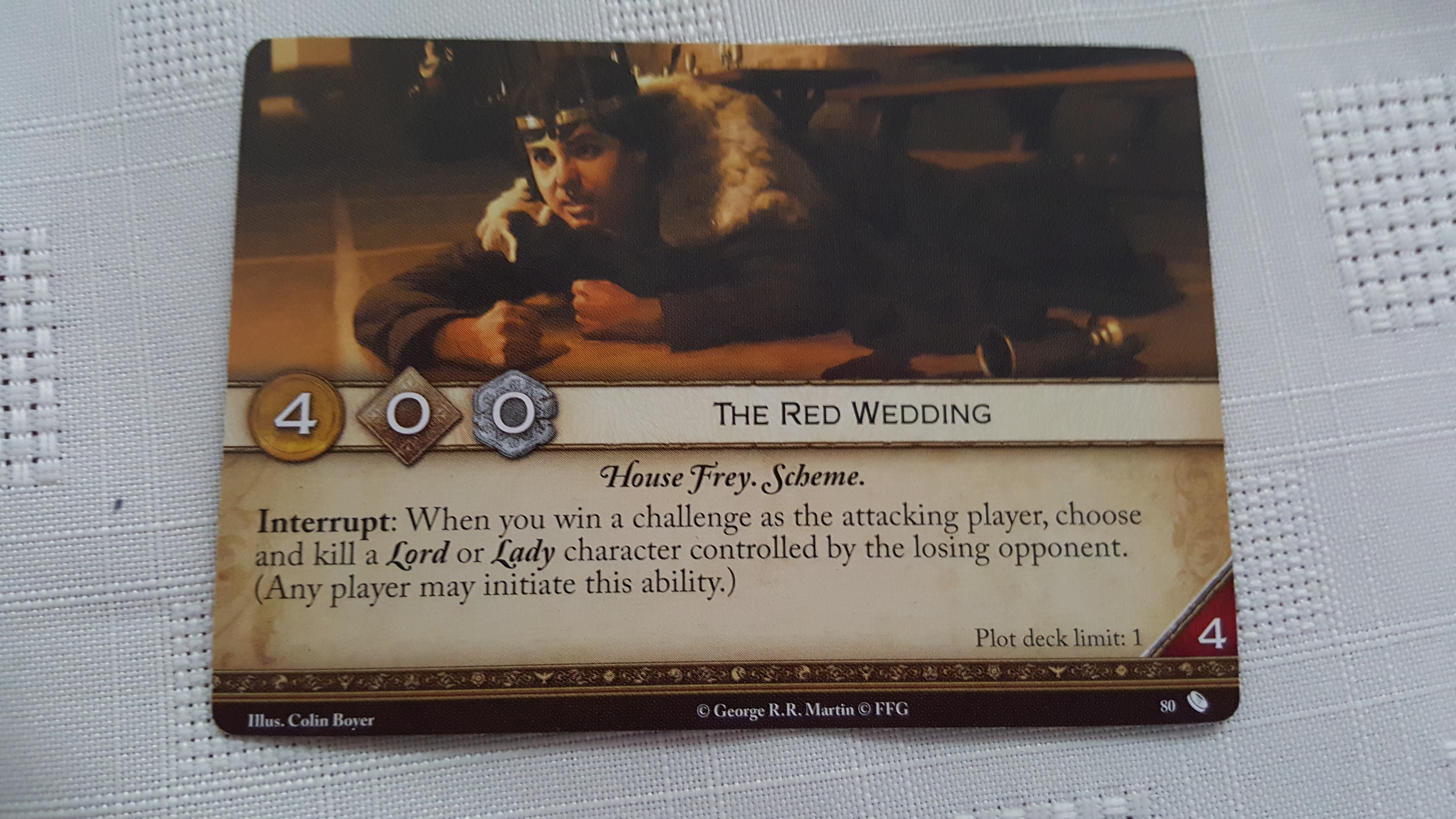 Hello everyone.  If you hadn’t already realised I have been on a bit of a Game of Thrones kick of late as I recently caught up on the TV show, and following that I dug out my copy of the card game and started playing around with it.  If you are unfamiliar with the game, and are interested I did an overview video – below.  (Though if you read my previous post, you may already have watched the video)

I had a quick peak at the fantasy flight website and decided to grab a couple of the newest Chapter Packs to add to my collection.  I then proceeded to do an unboxing video for you, for the pack entitled “The Red Wedding”.

I quite liked this pack, though the high points for me were the Greyjoy Cards and the Frey cards, including the Red Wedding plot itself.

I love Silence’s crew.  It is a solid non-unique card ideal for sending across to kill opposing characters, and it gets stronger the longer you can keep it raiding successfully.  And, with the pillage ability it is going to discard a lot of your opponent’s deck (pillage forces your opponent to discard the top card card of their deck).  Thematically, I would want to play them with Euron Greyjoy (The Silence is his ship, if you were unaware – and I hope that it will be included in future expansions as a Greyjoy Location as my Greyjoy deck has a lot of Warship locations).  And then, of course there is Plunder.  Such a cool free card that allows you to steal gold for every location pillaged, which makes sense when you think about it.  The only weakness is that you can’t save gold at the end of the turn.  Unless you’ve managed to steal something like the Lannisport Treasury, using Euron Greyjoy’s land stealing ability.  Or maybe there will be something in the Greyjoy deluxe box, when it is finally released?

And, of course the Freys.  Walder is pretty expensive, but if you have a lot of Freys on the field, he is ludicrously powerful.  I can envision a second Lannister deck built around the Frey cards, and if I manage that I will share its details on this site.

So, do you play?  Are you tempted to play?  Or does it just sound cool, but expensive to you?  Share your thoughts!