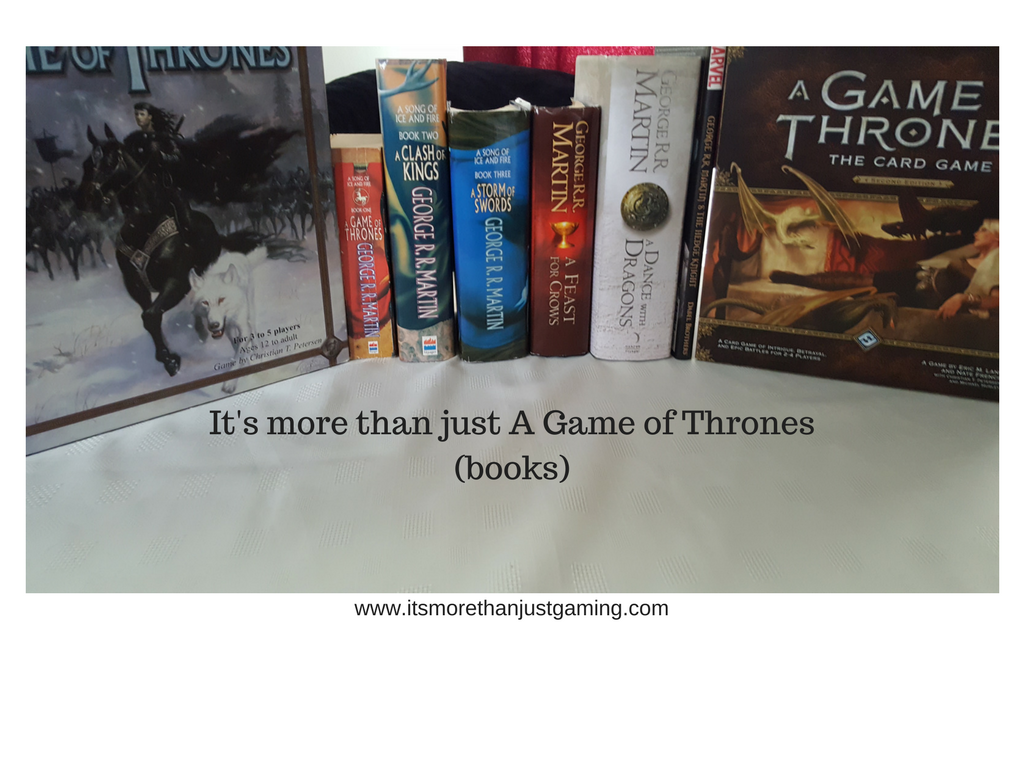 Hello everyone, and welcome.  Today I am going to be talking a bit about “The Song of Ice and Fire”, the setting created by George RR Martin which has become world famous in the last few years as a result of the TV show, a Game of Thrones.

I love that opening.  Ok, so, back to topic.  The TV series was inspired by a series of books that started way back in the 1990s – the first book in the series being named “A Game of Thrones”.  Younger me was at University the first time round in the late 90s, discovering I wasn’t actually that good at chemistry.  And part of my weekly ritual would be to visit the various book shops in the city of Glasgow and look for something new to read.   One Sunday when I was doing this I picked up a monster sized hardback called “A Clash of Kings”.  It was shiny.  It had a coastal fortress with dragon statues on it.

I knew I needed it.  I picked it up and read the inside front cover, little realising it was part 2 of the series (Yes, I should have noticed…(.  The first line of the blurb told me of the death of a character.  Oops.

I hunted out the first book, read the blurb on the back and thought, “Well, doesn’t this look cool?”

I bought the book, went away and read all 600 or so pages before the next Sunday where I rushed out to buy the second one.  Come to think about it, if I had applied that much attention to my Chemistry studies I may have done better, and thus enjoyed it more…hmm.  I read the second book equally quick and then waited about 3 years for book 3.  And another 3 or 4 for book for 4 and another 4 or 5 for book 5.  Yeah, Mr Martin publishes very slowly.  Two more books to go and the series should be complete…

Ok, so that was how I became introduced to what is popularly referred to now simply as “A Game of Thrones”.

And, in case you are unaware of the plot of a Song of Ice and Fire, allow me to give you a very brief and basic overview.

Intrigue and murder surrounds the Iron Throne of the Seven Kingdoms sparking civil war between rival houses.  Whilst this is happening, across the narrow sea the last daughter of a fallen house learns about and seeks to reclaim her birthright.  And, if that wasn’t enough, far in the north beyond the great wall (of Ice) the dead stir.

I cannot do the plot justice in one article as it is too vast, and too sophisticated so I condensed to the ludicrously simple.  I will say that George RR Martin creates an amazing world filled with amazing characters, and weaves a story the likes of which you will see a handful of times in your lifetime.

I noted that there were long periods of waiting between books, and you have to understand – back then Song of Ice and Fire just wasn’t as famous – however that doesn’t mean that nothing was generated in that time.  Graphic novels appeared, one of which I have

And, of course, there were games.  A good few years ago now I was given the Game of Thrones Boardgame as a Christmas Gift.  Given that I loved the books and I enjoy strategy games, this was a match made in Westeros…(the continent where most of the action takes place).

Each player randomly takes control of one of the houses of Westeros, and over the span of ten turns tries to capture land and resources whilst trying to prevent the other players doing the same.  The game is completely diceless, combat dictated by army size and the skill of the house character involved in the combat.  I should point out, I have the first edidtion of this game.  There is a second edition.  I will share a link below to a place you can obtain a copy.

There is also the Game of Thrones Living Cardgame.

The Game of Thrones Card Game, also currently in its second edition, is a game where players compete to be the first to get to 15 power.  As a living card game, there are hundreds and hundreds of cards available to choose from to build your game deck, with deluxe expansions filled primarily with cards relating to one faction, and chapter packs that act as boosters for all.  Which sounds daunting, and it is, and expensive – which it can be.  However, the advantage to the Game of Thrones living card game over something like Magic the Gathering is that you know precisely what cards you are getting in any pack.  So, if you love the game and know what cards you want you can simply buy the relevant packs.  In something like Magic, you take pot luck or you spend ridiculous amounts of money on ebay.  I did a video introducing the game, which you can watch below.

I have previously played this game using a Greyjoy deck, but am really becoming fond of my Lannister deck.  After much tweaking of both, and testing to see the probabilities of good starting hands I did a play test with my friend, Stuart, on Wednesday.  He took the Greyjoy deck, which is admittedly harder at the start to play as it has fewer money generating/cost reduction cards however it is simpler to play than the Lannister deck which was an easier start but more sophisticated mid to late game as a result of the Rains of Castamere.  And, Stuart was relearning the game as we hadn’t played in a while.  My dispassionate assessment of the playtest was that both players had poor starting hands.  He had high cost lord cards that he struggled to field, whereas my lords & ladies didn’t show up until about turn 6.  Despite that, both decks worked.  I was able to field a lot of low to mid level troops, such as my Red Cloak Army to prevent him coming across and murdering all of my characters.  However, the thing that actually held the Greyjoys in check for as long as they were was my Brothel Madame.

Since the Greyjoy deck tends to be poor initially I was able to prevent a number of attacks thanks to fielding several of these.  However, despite not losing characters and winning intrigue after intrigue, the Greyjoys were able to win power challenge after power challenge and eventually got out Balon and Victarion Greyjoy and their Warships turning the tide (see what I did there?) against me, winning the playtest.  Both players had fun in the play test and I am now happy that both decks work, so when we play competitively (I was helping him relearn and in the first couple of turns reminding him about card abilities he had as I needed to see how effective it was) it will be player skill that wins out.

The Song of Ice and Fire has spawned a Tell Tale videogame series too, though I have zero experience of it so can’t really comment.  I understand it is good, but that is as much as I can say.  If you have played it, let me in the comments!

And, of course, there is the TV show which has brought fame to the franchise – and who can argue?  Production quality is phenomenal and, despite some divergence in story, is just fantastic viewing.  Though, violence, swearing, nudity and “heavy petting” are gratuitous in most (if not all) of the episodes.  And, the cast is fantastic with a few unexpected cameos here and there from the likes of Richard E Grant, Jonathon Pryce and Mark Gatis.

For me, the books were my first experience, though I haven’t been disappointed so far with anything spawned by the franchise.  I loved reading them.  I enjoyed watching the show, and I enjoy playing the games.  As a less than successful chemistry student, but an absolutely successful English Literature student, I am happy to see a fantasy series of books being taken seriously for a change.  I always got the impression there was a fair amount of academic snobbery (though, admittedly not by my tutors) towards the genre unless the Tolkien was attached.  It is good to see something that can overcome the percieved inferiority of the genre and become more than just a sword and sorcery epic.

Thanks for reading!  Why don’t you share your thoughts?  I’d love to hear them!