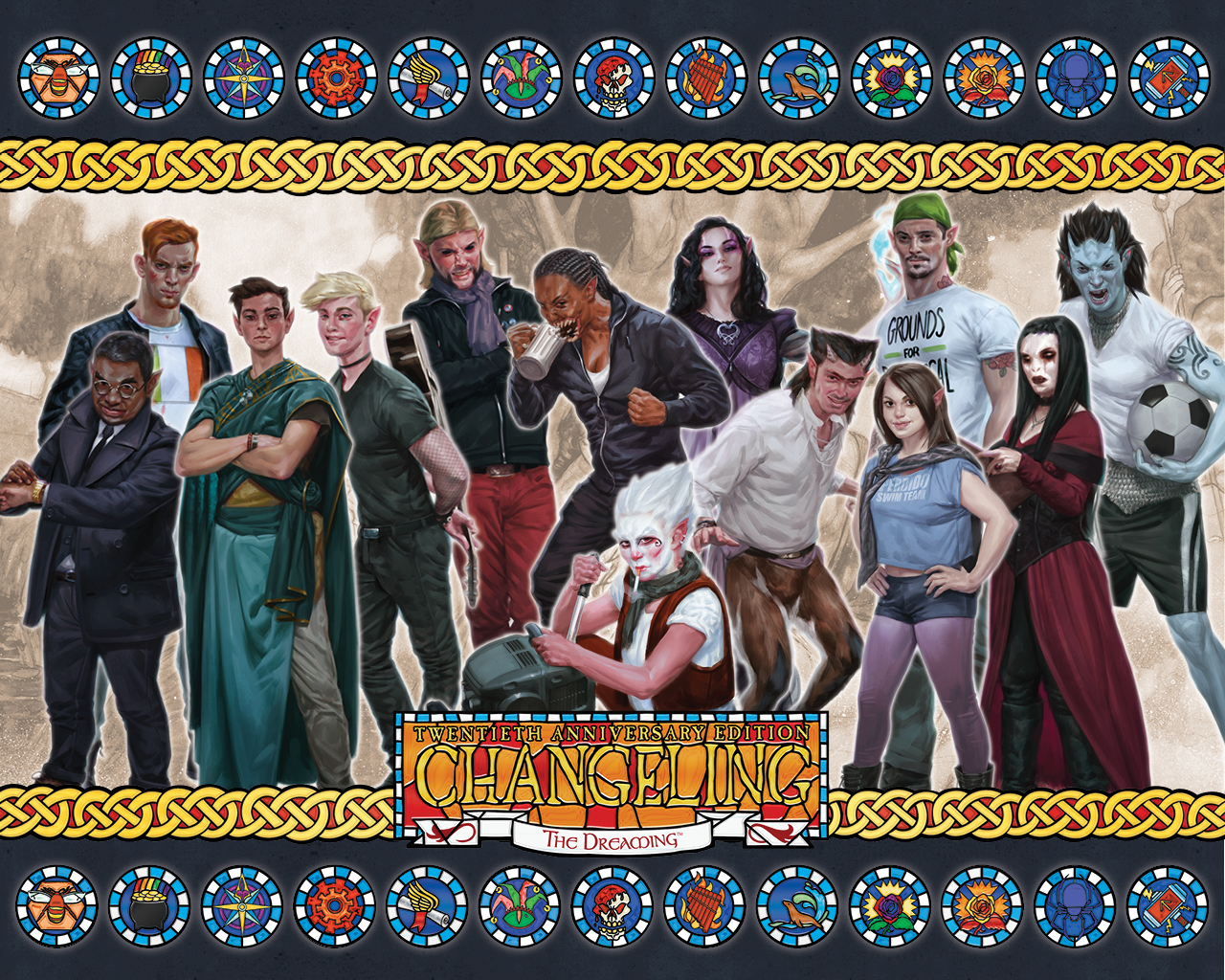 I should give you a couple of disclaimers.  This article is based on the Kickstarter Backer PDF released before Changeling: The Dreaming 20th Anniversary Edition was generally available, so the final product may have minor changes.  I should also state, that unlike Vampire: The Masquerade and, to a lesser extent, Werewolf: The Apocalypse, I am not very familiar with the setting for Changeling: The Dreaming prior to reading.  And, this article contains an affiliate links.

As with many World of Darkness games, Changeling: The Dreaming is a game of Duality.  Players take the role of Changelings, Fae Creatures born into human bodies.  The Fae, literally the Stuff dreams are made of, are soldiers in a war that every human can feel but no one, apart from the Changelings, knows it is happening.  It is the war between the creative spark of humanity that births the Fae, and the monotonous forces of the Banal.  Players find that whilst the mortal, and much of the supernatural, world only see their mortal “seemings” which might be anything from a prepubescent boy, to a teen queen to an aging eccentric, in reality they are in fact a stalwart Troll Knight, a capricious Pooka Trickster or even a vicious Redcap capable of eating anything.

Duality is a recurring motif throughout the setting, with creatures and objects existing in the mortal word (referred to as wyrd) and within the Dreaming (referred to as Chimera).  And, as with the different mortal seemings of Changelings and their fae form, such items that exist both in the Wyrd and the Dreaming might appear different in both.  Our mighty Troll Knight might wield a glowing sword of white fire within the Dreaming, something that all Fae can see.  However, all any mortal can see is an old Baseball Club.  A mortal might see an angry guy smashing  a parked car with his baseball bat, however, a Fae will see Sir William of House Gwydion striking at a monstrous chimerical dragon with his flaming sword.  Truly a battle of legend!  (I genuinely love this idea)

More than any other World of Darkness game, Changeling: The Dreaming is a game of fantasy and wonder.  Most likely the story will be set in the modern world, with Changelings looking for people to inspire to become “Dreamers” so that they may replenish their Glamour, the lifeblood of Changelings and the Dreaming.   However, any game of Changeling can reasonably accommodate the Fantasy Adventure Quest more commonly associated with the likes of Dungeons and Dragons, in the form of a quest into the Dreaming searching for lost Freeholds, powerful Chimera, or even lost paths back to the home of the fae, Arcadia.

Equipped with their natural fae abilities, such as a Troll’s strength or a Pooka’s ability to shapeshift and capable of wielding dream infused magic called “Arts”, Changelings are more than capable of defending themselves on the Banality riddled modern streets of the contemporary world, or of fighting creatures of legend in a world made of dreams.

Changeling: The Dreaming 20th Anniversary Edition is a hefty book at near 500 pages, A4 with print about the size of your standard novel.  Basically, if you want to read it cover to cover, its going to take you a while.  Fortuntely, if you are at all familiar with the World of Darkness line of games, you don’t need to read it cover to cover as there are large sections of the book given over to core rules and systems, which don’t change from game to game, and guidance on how to create characters and run a game.  The rest is Changeling: The Dreaming specific.

Opening with a piece of flavour fiction, then launching into the history of the Fae and their relationship with the mortal world, readers are thrust into the magical world of the Dreaming – which is a brighter more optimistic starting point for a World of Darkness rulebook than I was previously used to.  Until you realise that for a Changeling, Banality is crushing; that the 9 to 5 world of monotonous work, microwave dinners, reality TV and snide remarks on the social media echo chamber literally kills Changelings.  The Mortal Body, the mortal person the Fae inhabits doesn’t die.  When banality overcomes them. They simply forget the Dreaming.  They forget their sense of wonder and take their place as a drone in the world, which in many respects is more tragic than the fight to retain humanity in Vampire: The Masquerade.  In this respect, Changeling has a brighter starting point but the fall from grace is further and more tragic.

After regaling the reader with the history of Changelings up to the modern day, background is supplied on the various courts and kingdoms, and then the stuff we are really interested in – the Different Kiths (breeds) of Changeling.  There are many different Kiths to choose from, as mentioned, and all with some basis in fairy stories.  So, if you want to play a House Fae that just likes sorting things out, then it is a Boggan for you.  If you want to play a creature that likes to tinker and make crazy contraptions, then it is a Nocker.  Each Kith has unique Birthrights, frailties and can access Fae Magic, the “Arts” so there should be something to suit everyone’s preference.  And, of course there are entire chapters and appendices on villains, and rare breeds to flesh out the Changeling Chronicle.

At this stage I can only predict that the production quality of this book will be high.  As with other Onyx Path Publications, this product is sold Print on Demand from Drive Thru RPG.  And all of the premium hard cover books that I have gotten from Drive Thru have been outstanding quality, though are admittedly pricey.  (Admittedly I am less keen on the softcover as the card is too thin in my opinion).

Taken from the standpoint of a veteran Vampire: The Masquerade player, but a Novice at Changeling: The Dreaming, this book was daunting.  Very daunting.  I felt a bit overwhelmed reading about the history of the World of Darkness from the Fae perspective, encountering unfamiliar terminology that I struggled to figure out, even from context.  However, I persevered, and despite my initial difficulty it started to make sense.  I have encountered World of Darkness games that were incredibly complex, and the layout was baffling to me (See Mage:  The Ascension…), however this all slotted together rather well if you persevere through the history, and the Kiths with the character creation chapter, followed by the section on Arts and Realms. Admittedly that is 230 pages or so, though you could theoretically skip over some of the Kiths and come back later, if you felt so inclined.

Once that happened, it all started to fall together quite easily (I thought) and it was smooth sailing from then on in.  What was staggering for me are the sheer volume of other types of creature that exist in the world of Changeling, from rarer Kiths, monstrous Kiths, Autumn People and various types of dangerous chimera.  This was very appealing to me as I like trotting out the occassioal unexpected creature to surprise players – particularly bringing out obscure things from one game and dropping them in another.  My Vampire players never once suspected they had made friends with a Werespider, for instance.

And perhaps the most appealing thing about this book is related to this, sort of.  There are dozens of different types of Changelings covered in this volume, so everyone should find something.  However, there is structured guidance on exactly how one might build a new Kith to represent a different kind of dream.  Because, if a human can dream it, then it can be.  I don’t know about you, but given the unfairness and suffering in the World of Darkness there are bound to be those that dream of revenge.  And in my mind that means there is a place for a mounted spirit with a skull for a head, flaming or otherwise, feeding on the terror of those it punishes.  I even have a miniature to represent it…