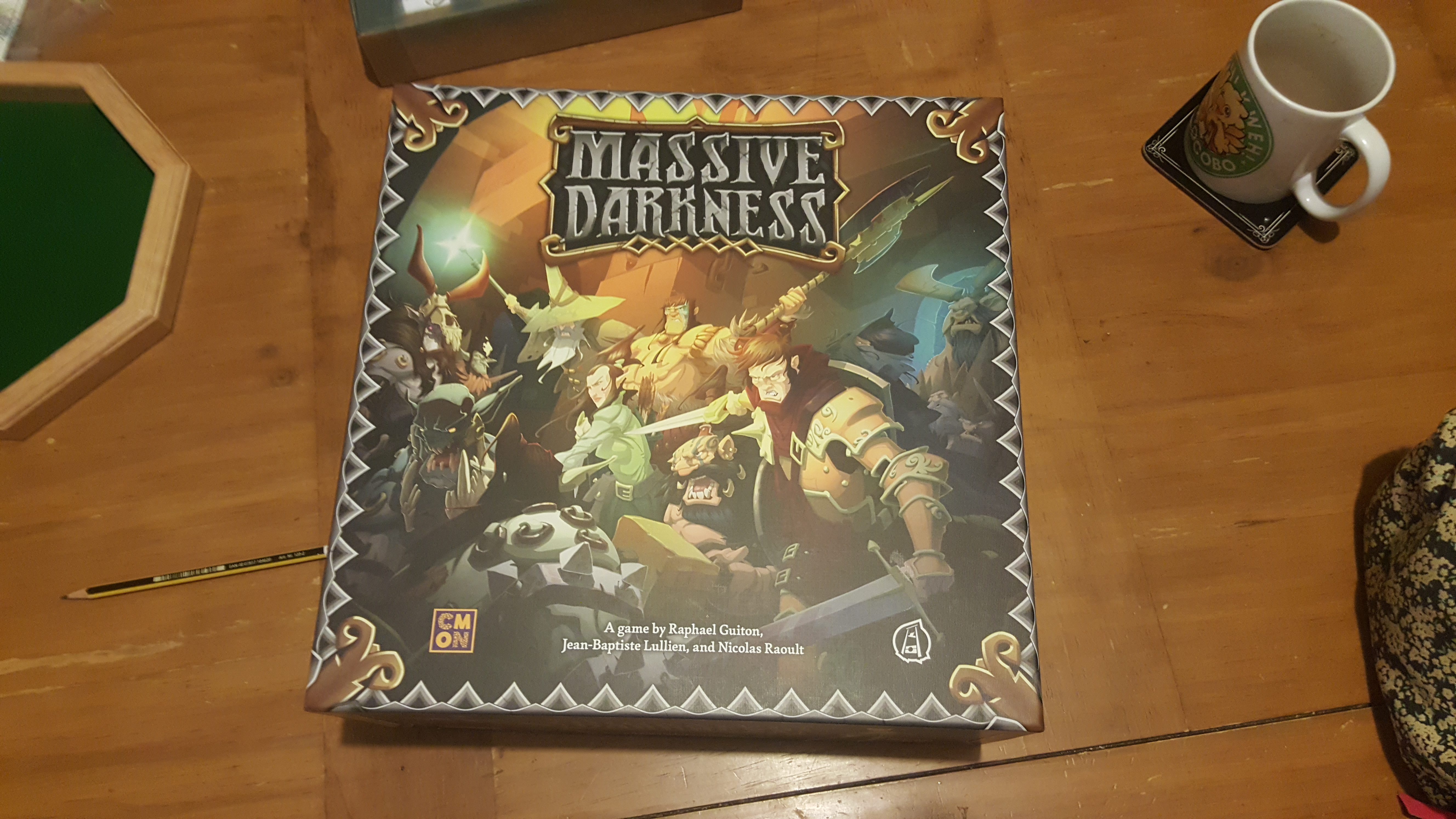 Hello folks.  I was recently fortunate enough to get a chance to play the new game Massive Darkness from those fine purveyors of plasticrac, Cool Mini or Not.  For anyone unaware, Massive Darkness is a fantasy type game set in the same world as Zombicide Black Plague (also made by Cool Mini or Not).  Kickstarter backers started receiving their copies not that long ago, and whilst I was unable to back this game that was no impediment, as my friend Stuart was able to do so.

We did the intro scenario, which was a modest two tiles in size which I thought would make it ridiculously easy.  We only needed to grab a key and run for the exit and my guy can teleport, easy, right? Nope, of course it wouldn’t simple.  For a start, what self respecting adventurer doesn’t loot every single room in a dungeon?  Plus, all the xp from the monsters…Yay, lots of xp.  Because lots of monsters…

Ok, I got sidetracked there.  Only two of us were playing and I adopted my usual stance of taking a spell caster (If you want to understand why I picked this character, I wrote a post about why I choose certain character types which you can read HERE ).  In this case it was a Battle Wizard.  No feeble old man for me, I could wear armour and everything.

Stuart picked the ranger/rogue type character and we ventured into the dungeon.  We opened the first room and found treasure.  And Monsters.

A few spells and arrows later we looted the room of treasure ignoring the corpses of monsters in the corner.  You know, just like in Dungeons and Dragons.

We pressed through the Dungeon, smashing everything in our path though there were a couple of moments where it looked like we were going to be flattened by the monsters.  We could have ran from about turn 3, but as I said we were self-respecting adventurers that needed to loot.  So, we looted.

By the time we escaped the dungeon I was geared up with plate armour and really cool equipment, and was probably the tankiest of our pairing (How did that happen?).  We completed the intro scenario and truth be told, I did not take a single wound.  However, this should be taken in its proper context.  The Intro Scenario, played as standalone mission is not terribly difficult and players can level up very quickly.  Played as part of the campaign, players level up more slowly.   So, my first game of Massive Darkness was fun.  Let us look at why.

Players take it in turns to activate in sequence each round.  They have three actions each, which can be used to move, attack, pickup, transmute or do special actions.  For each action allocated to moving, players can move two spaces, or move one space and pickup all the treasure in a space.

Players can spend an action attacking, and they get bonuses if attacking whilst in shadow.  For much of the game I was carrying a magical orb that had other bonuses to being in shadow as well.  And, a cool mechanic forced ranged weapons to only work from range 1 onward, rather than having a bow that could shoot enemies in the same square forcing players to think tactically.  You could also fire into a square with friendlies without hitting them which was something you couldn’t do in Zombicide.

The combat actions of the monsters were very simple.  Monsters appear as dictated by the dungeon or by decks of cards.  If you attack a mob of monsters, you roll damage once and they roll defence once and you remove casualties (I am vastly simplifying it here, but that is basically the case).  If you engage a monster capable of melee combat in melee, it gets to strike back on your turn.  If you shoot a monster and it has ranged abilities it will exchange fire with you on your turn.  Each mob of minion level monsters has a boss, which carries a treasure.  If it can use the treasure, it does.  Once it dies, you get the loot.  Let me re-emphasize, this is a simplification.  I don’t plan to regurgitate the entire rulebook here.

In relation to combat, there was a feature that I really liked.  If you kill a minion, you get 1 xp in a standalone game, or 1 micro xp in a campaign (5 micro xp = 1 regular xp in a campaign.  It is intended to stop players getting super high level in the first dungeon).  1 xp/Micro xp per kill is reasonable.  Kill a boss, or something bigger, then it could be 3 or more.  Here is the cool part.  Everyone on the table gets that xp when a bigger model gets killed.  I love that, because I know some people – and lets face it we all know these people – who do not know the meaning of the word teamwork and run off killing everything on the board to level up, leaving everyone else languishing at level 1.  Jonathan, if you are reading this, congrats on your new job and yes, I mean you!

This is doubly bad in games like Zombicide that level up as the players do.  However, Massive Darkness is more forgiving of this play style.  Players can indulge in their murderous rampages  as they will tend to drag everyone else along with them.

There is also the opportunity to transmute items.  If you have three items of 1 level, you can transmute them into an item of 1 level higher.  That is fantastic and resulted in me having an amazing setup by the end of the game (The Ranger didn’t do badly either – we were cooperating).

Massive Darkness plays similar to Zombicide so, if you are familiar, the learning curve isn’t too steep.  The campaign/leveling up element feels like somewhere between Zombicide and Descent, in that there is now a progression but the leveling up seems a bit simpler.  I really enjoyed the game and look forward to slowly following behind Jonathan as he murders the dungeon whilst I quietly level up.  I don’t think I will be getting this since I already own Descent, plus Stuart owns a copy, so win win.