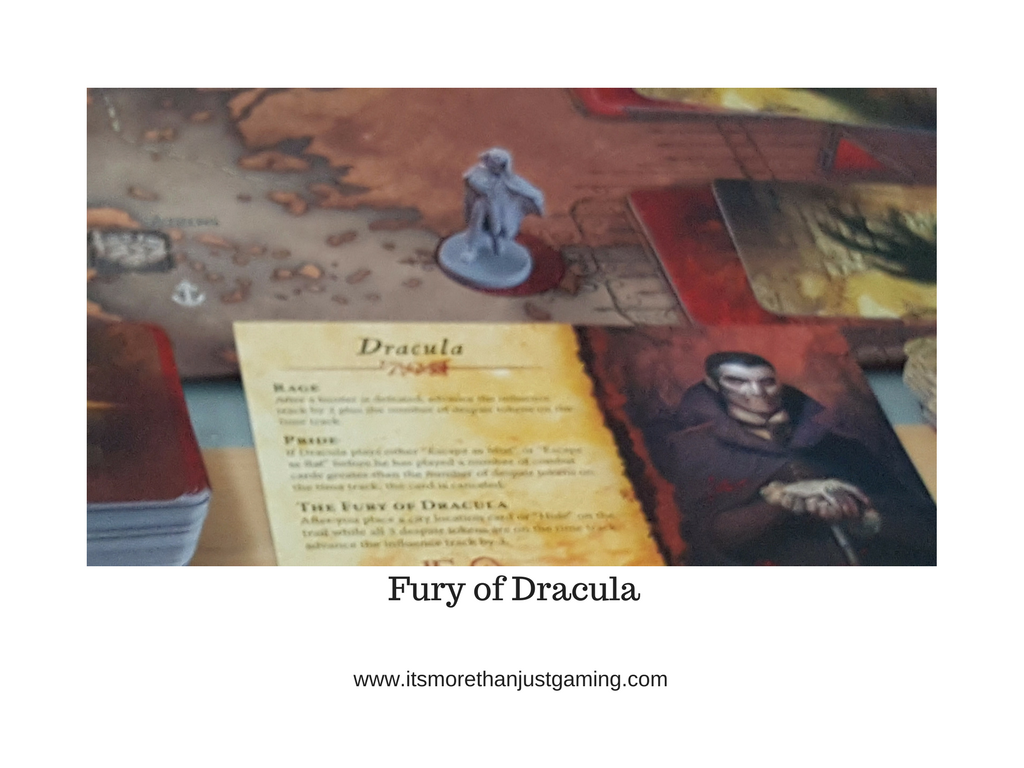 Hello everyone and welcome to you.  Today I am going to be talking about another games night we had recently, this time playing a game of stealth, deception, hidden movement and pursuit.  We played the game “Fury of Dracula”

Fury of Dracula is a game of hidden movement where up to 4 players control 4 hunters who are doggedly pursuing Dracula across Europe, hoping to drive a stake through his heart, cut of his head, and burn his ashes/bury him facedown at a Crossroads.  Dracula, on the other hand is moving about Europe creating new vampires, creating lairs and fomenting trouble with the intent of increasing the terror level to the point he becomes unbeatable.

I have read some articles by folks who have played this lamenting the difficulty in winning when playing as Dracula.  I was baffled as were my friends.  This game is heavily tilted in Dracula’s favour in my opinion, based on 6 or 7 games as Dracula with only 1 hunter victory when I decided to change strategy.

The Game is straightforward.  There are Dawn, Day, Dusk, Night and Dracula Phases (which is less complicated than it sounds.).  Hunters can act during Day and Night

Dracula acts in the Dracula phase, and if Dracula is in the same city as a hunter combat happens during Dawn or Dusk.  Hunters start wherever they wish on the board, and when they have chosen starting locations, the Dracula chooses a city to start in.  Dracula doesn’t appear on the board, his location is secret and the Dracula player takes the corresponding city card to his start location and places it on the first space of the Dracula trail and play starts.  The Hunters have the difficult task of searching Europe, whilst Dracula only has to survive and sow chaos.  Theoretically, Dracula need never encounter a hunter (though there are advantages if he does and bests them in combat).  Each turn Hunters take actions, including moving, supplying, using special Hunter Abilities (Mina Harker is very useful for this as she has a psychic link and can help track Dracula)

Whilst in the Dracula phase, Dracula chooses the corresponding location card for the next part of the trail, which must be a legal move from the previous location.  So, over time the Dracula trail fills up with six cards, and if a Hunter lands on any of them then the Dracula player is obliged to reveal that card.

This sounds really difficult for the Hunters, and truthfully, it isn’t easy.  I have a lot of admiration for them every time they find my trail skilfully.  Because more often than not, it is found by skill rather than chance.  It also makes it all the more fun when I fool them and they go entirely in the wrong direction

Hunters do have some advantages.  They can supply with events and equipment to make the hunt easier.  Dracula gets events too, but the Hunters have more control over that than he does.  Many Hunter events force Dracula to reveal location cards, allowing the Hunters to rule out locations and in one instance they were able to reveal something on the trail.  And, if the Hunters corner Dracula they have a very good chance of beating him in combat as his pride won’t allow retreat until certain conditions are met (I love that mechanic) and he an only defend against one attacker.  However, if Dracula corners one hunter, he has all the advantages.

Fortunately, Hunters are never killed.  If defeated, they are shipped to a hospital an return to play next turn, minus their equipment and events.  Dracula can only be defeated once.  If this happens, game over, Hunters win.

Of course, it was never going to be that easy.  Dracula places encounters on each space of the trail, which may hinder hunters or they may be nascent vampires hoping to mature.

He also has a number of special abilities he can call upon to heal wounds or move faster in wolf form.

In the last game I played, I started out in Italy, ran down the leg and caught a ship to Spain.  Travel at sea is risky as it damages Dracula but it is easier to lose Hunters.  Ultimately, they caught me in Spain and only a few fortunate encounter cards allowed me to cut off Hunter Reinforcements, allowing me to defeat one and go to sea again.  I stayed at Sea for quite a long time, confusing the players making them wonder which way I had gone.  Did I go to the UK or Northern Europe?  Or I did I go the other way?  They all searched west.

I was in the East.

To give the hunters credit, they did figure out my ruse and hurried east but I was able to elude and out manoeuvre them with my wolf form, long enough for my last vampire to Mature and for me to gain victory in the game.

The Hunters gave me a serious run for my money in that game, I don’t think I ever felt quite so threatened by them as they circled towards the end.  MY sea Voyages had left me weakened and I was banking they would chase me and leave the fledgling Vampires alone.  I was right.  But it nearly cost me my unlife…

I would say the hunters do best when they work as a team, and in this game they weren’t working particularly effectively.  With 2 players constantly on their phones playing other games, their other team mates were at a disadvantage.  No problem to me.  But they might have won if their focus had been on me and not candy crush.

Now, I must return to my coffin…the sun crests the horizon.