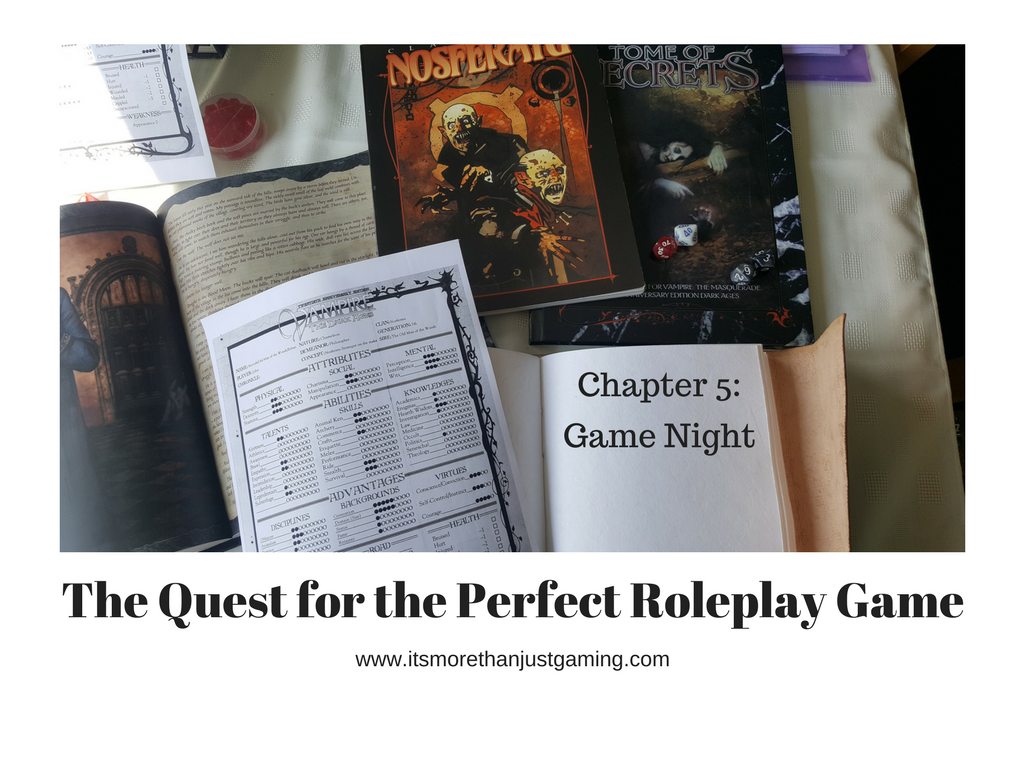 Hello, and welcome to chapter 5 of my Quest for the perfect roleplay game.  Today I am going to talk about Game Night (or Game Day, or afternoon or morning.  Whenever).  By now we have found our group of players, we have created our characters, the Games Master has a scenario plotted.  So, it is time to play.  This post is going to cover what things to have handy for the game, and also a couple things that could happen during play.

You obviously need enough space for all the players, and any items you need to play the game such as rulebooks, maps or scenery and miniatures (if you use them) and so forth.  Each player needs their character sheet and the Games Master also needs a copy.  The reason for this, sometimes it is appropriate for the Games Master to perform a test on behalf of a player to keep the immersion.  So, using Vampire as an example, if I ask players to make a perception/alertness check they are immediately aware, as players, there is something to notice.  If they pass the check, great – I tell them.  If they fail, I don’t, but now the players know something is up.  And sometimes they will find reasons to do other checks or find out what they missed.  Or, the opposite end of the spectrum, the deliberately avoid doing things as they are unsure if they would have done them if they hadn’t been asked to perform, and subsequently fail, a check.  It is also just useful for the Games Master to know who is capable of what, and what their weaknesses are to increase the challenge.

Pencils and notepaper for all is also advisable so players and Games Master can take notes, and in the case of a conflict, the GM can track who is where and who is wounded.

You don’t want to be seeing phones anywhere on the table or in the player’s hands, except if they are being used for an app.  There is a 5th Edition Dungeons and Dragons Spellbook App that I use when playing DnD, but otherwise my phone remains untouched.  Speaking as a GM, it is incredibly irritating and thoughtless of a player to be spending a game reading their phone.  I was always annoyed at having to repeat myself when players weren’t listening, and I have ended games prematurely when players have said to me for the third time in a session “I have no idea what is going on” as a result of not listening.  If you are playing in a game, you and the Games Master are there to have fun.  However, remember the Games Master has put in time and effort to create the game.  It is insulting to check social media whilst they are trying to outline what is going on.

That was more ranty than I intended however, I feel quite strongly about it.  That isn’t to say games always have 100% focus.  In fact I have yet to play in a game where everyone at the table didn’t go off on a tangent together to a weird and comical place.  That is fine, when it is everyone and it is triggered by the game.  It is less acceptable, to me, where an individual isolates themselves from the game.  Ok, rant over.

The next piece of advice for games night is to the Games Master.  Don’t panic.  It is ok for you to relax and have fun as well.  It is your game too.  You have a job to do, but presumably you wanted it and it is fun for you.  And you have confidence in your ability to deliver.  Remember that, and relax.

Starting a game session can be difficult sometimes.  There is an old cliché that many Dungeons and Dragons adventures start with a group of strangers in a tavern, where an old wizard clutching a map walks in, starts saying something and then dies.  The adventurers then automatically think map = treasure and adventure and a party is formed.  It kinda works, but it is boring.  So, there is a bit of work to be done by the Games Master in building some form of emotional hook for the players.  Why are their characters together?  What reason have they to stay together?  Being asked by a potential sponsor/patron is one possibility.  A personal loss to the characters is another, or a mutual threat.

So, once you have your hook, your players are now together as a group and they are going on an adventure.  The next thing that can kill a game is an argument about rules.  First of all, there are no rules.  There are guidelines.  A roleplay game is about telling a story whether it is a character driven story or a dungeon driven story.  The purpose is having fun, and squabbling over rules is contrary to that.  To the players, the Games Master is the final arbiter so you need to respect that.  To the Games Master, ask yourself – is this rule worth disrupting the story?  Does what the players say make  more sense narratively?  Is your position fair?  Make a decision, and make a fair one.  Hopefully, if you have chosen your group well, that will be that.  If you trust your Games Master, trust their rulings.  If you trust your players, trust their interpretations of rules that they may be more familiar with than you.  An example of the latter.  When playing Vampire, I have printouts for all of my players’ abilities supplied to them.  When they ask to do something, they supply me with the rules verbally and I take them at face value – I trust my players.  If something seems odd I may check it later to see if it is open to interpretation or imbalanced, however I don’t do it during play.  The story and the game are what counts.

To the Games Master – if players aren’t enjoying something, change it.  Go where the players are having fun and don’t be afraid to say yes.  Players will surprise you time and again coming up with unexpected ideas and strategies.  Go with it.  Don’t be afraid to enforce consequences of poor decisions, but if the players had fun then that is all that matters.  Try and keep the pace going, even if the players are nowhere near the plot.  I will end this post with a related anecdote.

In my Vampire Game, one of the players is subject to a haunt.  The haunt manifests in various ways and at one point manifested as a waking dream.  Whilst he and the other player walked the streets, he saw a familiar girl and decided to pursue.  She was part of the haunt.  She fled when he approached.  I hadn’t anticipated a chase, but ran with it.  She fled to a grave – it was meant to be a clue that she was a ghost.  The haunted player saw her name on the grave, a Romanian name.  His companion, not subject to the haunt, saw something else entirely.  Which led to confusion and conflict between the characters.  However, they decided to try and find out who the girl was and broke into county records.  It was most amusing when they both started searching in different sections.  However, to add a bit of excitement I put a security guard in the building.  I called him Cyril, named after my neighbour who decorated my flat.  I described him as a tall thin man, with white hair and moustache on the other side of retirement age.  Exactly like my neighbour.  Basically I made an NPC guard out of my neighbour, who is probably close to 70 and looks like a skinny Ron Pearlman.  Naturally, he caught one of the characters and proceeded to try and detain him and ultimately beat the stuffing out of the player character.  This was one of the funniest games of my life.

This then led to another storyline where the player stalked the Guard, in order to find out where he lived to visit him and get, and then ultimately enslave him.  A tad petty, but it was what the player felt their character would do.  None of that was planned, it was nowhere near the main plot but the players enjoyed it so I ran with it.

Don’t be afraid of yes, go where the players want and don’t forget, it’s all about having fun!

featured, Gaming, RPG, the quest for the perfect roleplay game

5 thoughts on “The Quest for the Perfect Game Chapter 5: Game Night”