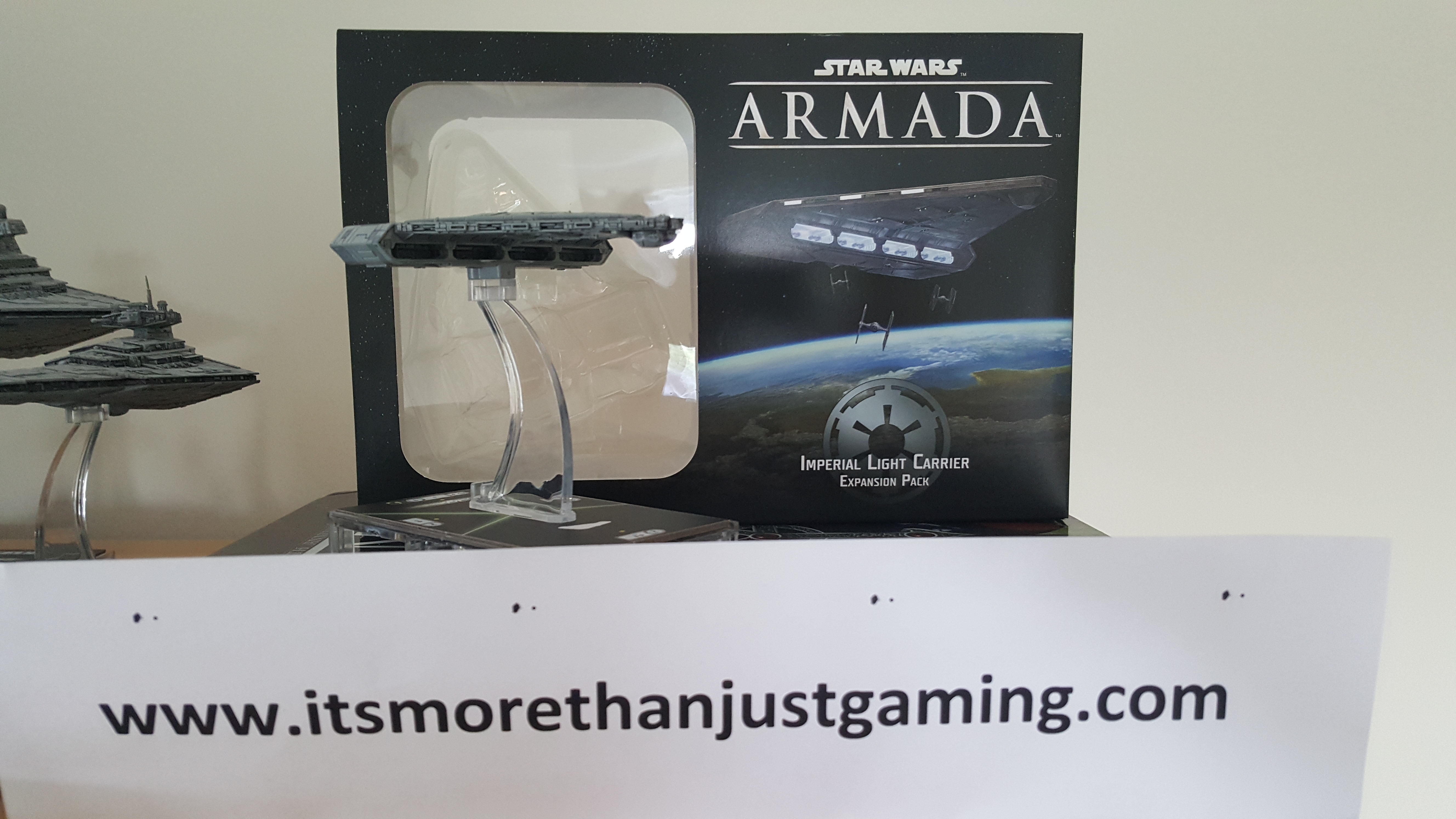 Hello everyone, and welcome.  Today I am going to be talking about my latest Star Wars Armada purchase, the Imperial Escort Carrier.

So, the Imperial Escort Carrier is a medium class vessel in the Imperial Starfleet in Star Wars Armada.  As I noted in the video this was a bit strange for me as historically, the ship is a rebel vessel from the book Truce at Bakura, by Katherine Tyers available HERE, and in the 90s videogame Star Wars: Supremacy (I believe it was called Star Wars: Rebellion outside the UK, and is available on Steam under that name right now – it is a fun strategy game, though graphics are somewhat dated).  However, the Imperial Escort Carrier re-entered the Star Wars Universe as a Bomber Carrier in the TV Show Rebels, and as such became part of the Star Wars Armada Imperial Starfleet.

As a carrier, its strongest asset is that it can activate the same amount of Fighters/Bombers as an Imperial Star Destroyer, and is significantly cheaper to field in a game.  So, if your strategy is more dependent on fighters/bombers then the Imperial Light Carrier is a good addition to your fleet.  What I was surprised about was that there weren’t many upgrades that were specifically Fighter or Carrier themed.

The one upgrade that does seem to be specifically fighter based is Admiral Sloan, whose ability helps use fighters to expend capital ship defences, which makes Tie Fighters much more useful when engaging bigger things.  They still don’t necessarily do the damage, but at least they weaken the enemy vessel in anticipation of your big guns finishing the job.

Many of the upgrades appear more like cruiser/destroyer (And I mean in old fashioned naval sense destroyer than Star Destroyer) upgrades in that they appear to be pursuit upgrades.  Imperial Ships tend to be heavy and powerful, whereas Rebels have to rely on their speed and the few large ships they have.  I could see some of these upgrades going on something like the Gladiator, the Imperial Raider or the Imperial Light Cruise (which I don’t own) to chase down fleeing corvettes and frigates.  So, they would be handy if I thought the scenario was going to be a game of cat and mouse rather than my big guns flattening everything.

My favourite Upgrade of this entire expansion are the Boarding Troopers.  I have nostalgia of playing games like Civ 5 and Alpha Centuari on my PC, and augmenting my fleet of ships by boarding enemy vessels with Marine Detachments and capturing them.  I have done similar in the PC Game Star Ruler, though have never quite got the balance right there.  Sady, you don’t capture ships with the boarding troopers –you expend defence tokens.  These upgrades are ludicrously powerful.  Particularly if Admiral Sloan is in the Fleet and your Tie Fighters are already scraping defences away.  Thematically, I interpret the cards as a carrier vessel having its fighter control team directing boarding torpedoes or shuttles through the fray onto enemy ships so that they can storm key locations and blow them up.  Given that the ability can be activated with a token, instead of a dial, this ability can effectively be prepared in advance.  At the risk of exposing strategy to future opponents, I cannot see a situation where I wouldn’t have at least one team of boarding troopers in my fleet.  The Imperial Light Carrier includes two within the box…

There are three name upgrades for the Imperial Light Carrier, Pursuant, Squall and Stronghold.  Am not keen on Pursuant.  It is useful but there are officer upgrades that do the same, though if you are limited in space for upgrades, this might do if you expect to need to change strategy.  Squall is handy for moving additional fighters, but Stronghold is absolutely my favourite as it helps the survivability of Tie Fighters, which are unshielded unlike their rebel counterparts.  Counting them as obstructed at least makes it a little harder for the rebel player to rip apart your fighter screen before they can do their job.

I suspect this ship will fit right in when I play larger games of Star Wars Armada, or smaller hunter type games where speed and maneuverability are more important.  I am looking forward to fielding it.  Hopefully soon.