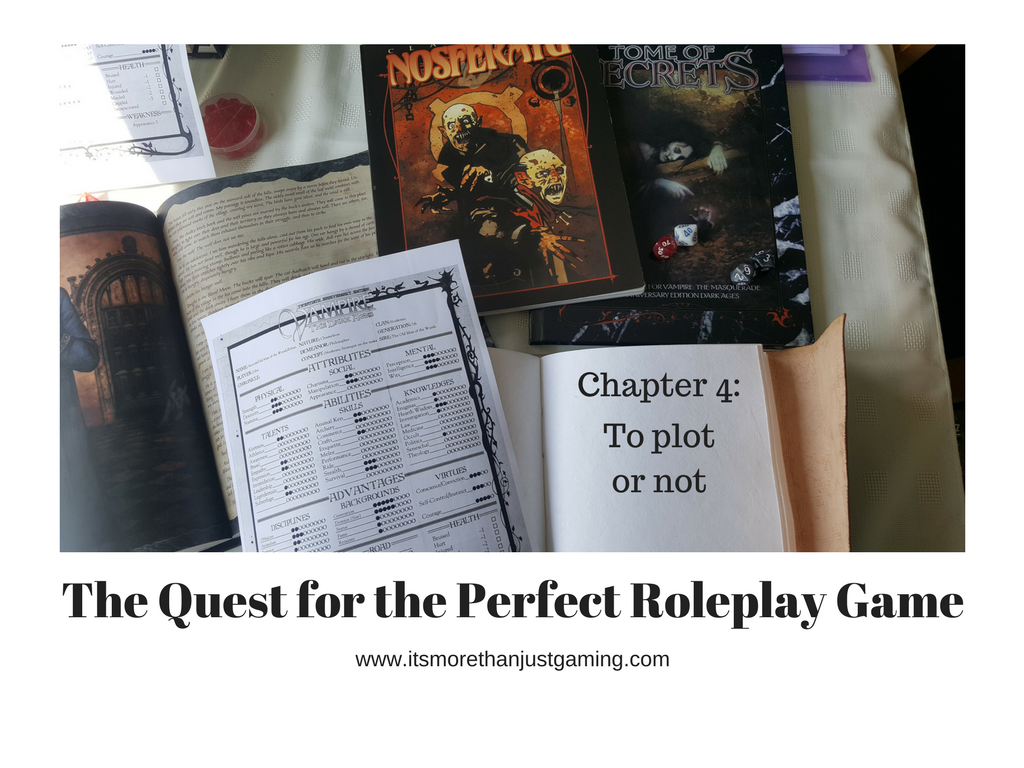 Hello everyone, and welcome!  Today I am continuing my series of posts searching for the perfect roleplaying game experience.  Quick disclaimer, there is an affiliate link in this post.  This time I am looking at a question the Games Master has to answer.  Should they plot everything out, or improv everything?

And, as before, I think the answer boils down to purpose of the game (and what they are comfortable doing).  Now, having already read Chapter 3 of this series, you already know I am a fan of having various discussions at character creation about what players want to play.    A good rule of thumb is to ask the players two questions.

What three things do you want in the game?

What three things don’t you want in the game?

Then give some guidance.  The Three things could be genres, types of stories, particular types of person to encounter or even artifacts.  You don’t necessarily need to guarantee everything in a player’s wishlist, as sometimes it might not be possible.  However, if you have a list then at least you can put something for everyone in the game.    Player feedback begets co-creation of the game, which increases buy in.

Anyway, back on topic.  Players have now been involved and you know what sort game they are wanting.  So, that brings you back to the question, should you plan everything out?

It boils down to two things.  What sort of story are you telling and what are you most comfortable with?

When I started GM’ing years back I plotted and planned everything.  Characters had backstories and each game had a scene order, with descriptions and events.  This had the advantage of being very cinematic, detailed and engaging for the players.  However, it had the disadvantage of being rigid, so when players took unexpected turns it was very hard to cope with.  It also stifled the creativity somewhat.  I have experimented with complete improv, which I found worked ok for short bursts but I struggled maintaining consistency over protracted periods of time.  The advice born from this,  find what method suits you and go with it.

You may recall that I interviewed a number of my friends in preparation for writing this series to get their opinions on various elements of running a game.  They came up with two opposite viewpoints I am going to share.

In this context, the Linear Game is where everything is mapped out and players weave their way through the Games Master’s pre-constructed, potentially labyrinthine story.  They are brought in to the plot, given a reason to follow it and then guided down the path.  This works particularly well for quest based adventures, where players are driven to a specific destination, by a more or less specific route.  It works well where the plot is a physical journey, or where the tension comes from the setting (such as venturing through a trapped dungeon).  It also has the benefit of being relatively easy for inexperienced players to get into, as much of the game is likely to be about solving the physical problems in front of you.

The Haunted Mansion full tile set (which has multiple levels, and is really awesome), and many more, are available HERE on Drivethru RPG.  Search Heroic Maps.

This type of game probably needs a reasonable amount of preparation, in terms of maps and scene descriptions, challenges and a hook to catch the interest of the player in the first place.  However, once that is done, provided players stay on the path you provide, it should be a very easy game to run.

One of my friends told me that some of the best games he has ever played in are the ones where that are completely unplanned.  Some people, players and Games Masters alike, will thrive on this type of game as it allows creativity to flow freely, and it adds a major elements of the unexpected for all.  Discovery, Exploration, and Conflict are, after all, three pillars of a roleplay game.  The fourth is wonder, and the Unplanned Game is potentially a huge source of that.

For such a game, you really need to be confident as a Games Master that you can keep players engaged and be able to create new and appropriate scenes on the fly.  To make things easier for the Games Master, it doesn’t hurt to have a few non player characters (NPCs) created in advance with a few stock locations, so if players catch you off guard, you can still produce something relatively quickly.

For me,  it is a compromise somewhere in between the two.  It is also the method I recommend.  I call it

I am by nature paranoid about failure, so I like to plan things out.  However, I have learned that plans can be restrictive, for me at least, and that is particularly true in this context.  So, I plan in a different way.  I plan the characters that are going to appear in a story.  Strong characters drive scenes and plot, which is true for any style of game, giving players something dynamic to interact with, rather than static puzzles.  I plan out several locations that are in the story, so that when players visit them they can be immersed in the details of the world.  And then I plan what has gone on immediately before the game starts.

This is important, and the origin of this process is from old school detective and crime novels.  My Tutor once said that in every crime story there are 2 plots.  The plot of the crime and the plot of detecting the crime.  This is fairly similar to what I am talking about here.  There is what has gone before, prompting player involvement and then there is the player involvement.  When I started games mastering all those years ago, I plotted the second part without due care for the first.  However, if you need the safety blanket of a plot (like I do), then you can plot what has gone before.  You can note where clues can be found and you can note NPC intent.  And then you can create your hook for players to get involved.  And then, you let the players loose on it.  You have your safety net but the players also have freedom.

And, if you have done your due diligence as a Games Master and know the capabilities of the player characters, you can tie the clues into their areas of expertise.  One friend said that it was always good to have two paths through the story, or two ways to solve the problem.  For me, there should be many ways to solve the problem and the most effective, easiest or meaningful are tied to the players.

Generally speaking, to prepare an unscripted game I will create the following

The Main NPCs – Some of these will need to be invented from scratch, others may already exist in your world.  I note their location, and relationship/involvement in the plot.

The Main Locations – Some of these may already exist in your game, others may need to be invented.  I tend to note what players may find at these locations, particularly anything that is different from previous encounters.

What has already happened that sets up story – I use a piece of software called Inspiration 9 as it is mind-mapping software, but realistically you just  need to write a list of key events and their relevant facts

What Clues exist – Chances are these form part of an encounter in a location, or with a character.  I note these down and make sure there are methods that the players have access to that will allow them to find them.  Such as knowing people in the know, or having relevant skills that will uncover  lead that may point in this direction.  I leave it nebulous so that players can surprise me.  Chances are if they do something that makes sense and doesn’t contradict established fact it will lead in the right direction.  (However, this is not a guarantee – sometimes pre-established story might get in the way and this may send players on a wild goose chase.)

A Hook – the reason players will choose to get involved.

Find attached an example of  Scenario I mocked up for demonstration purposes using Inspiration, exported to PDF.  It took about 30 minutes.

Death of a Lunatic – Vampire the Masquerade Example Scenario

The example scenario assumes knowledge of the setting, and that there are character sheets and backgrounds for the main NPCs in the setting.  It outlines critical locations and people, but not how to find them – that is up to the players.  (Quick note – Ventrue, Malkavian and Tremere are Vampire Bloodlines in the Scenario.  A Black Spiral Dancer is a corrupted Werewolf)

I recommend this method as it is a fair compromise between plotting to the Nth Degree, and pure improvisation.  And it is easily adaptable to either style.  If you want it to be more freestyle, then write less down.  If you want to have a more solid foundation, put more details into the plan.

As ever, what it boils down to, its all about having fun.

Community, Gaming, RPG, the quest for the perfect roleplay game

5 thoughts on “The Quest for the Perfect Game Chapter 4: To Plot or Not”