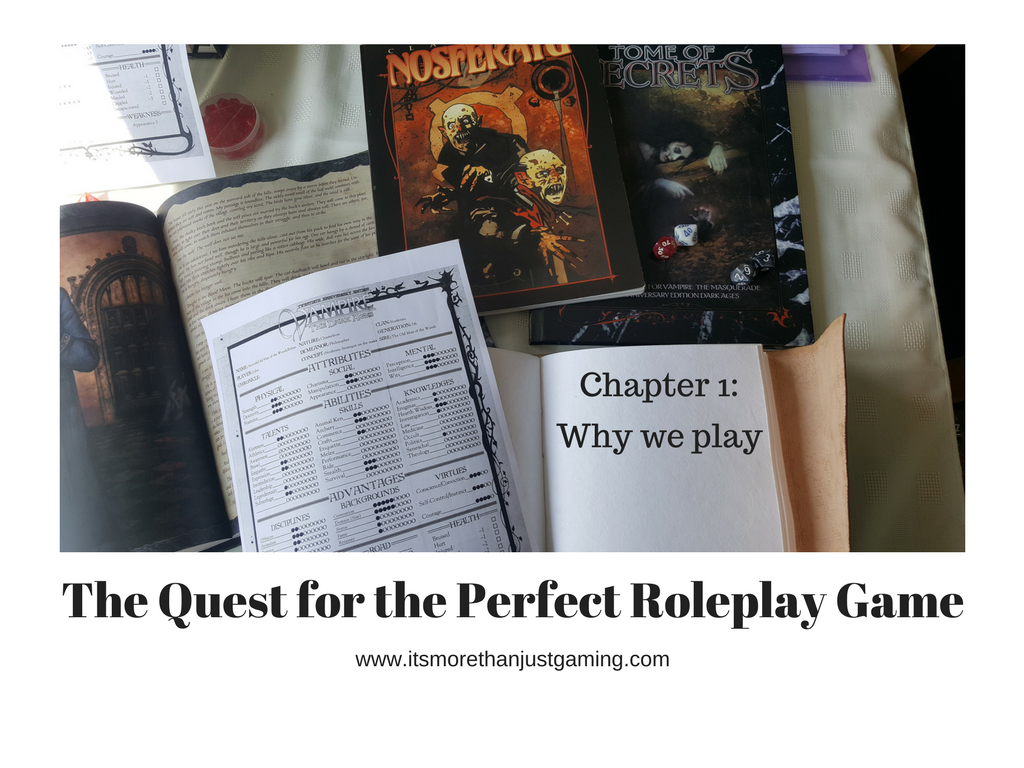 Hello everyone, thank you for stopping by. Today’s post is the first in a series I have called “The Quest for the perfect Roleplay Game”. Unsurprisingly, this series is about making sure you have the best gaming experience possible.. This is based on personal experience and the experience of several of my friends, all of whom have played in roleplay games, and have run them for others. This first post explores why we play roleplay games.

So, I spoke to quite a few of my friends about what they specifically liked about roleplaying games  and probably the most common response was that they wanted to be part of a story, indeed they were keen on telling and co-creating said story. Less common, but still worthy of mention was some folks really enjoyed the mechanics of play, building a character and advancing them through the story.  I’m going to touch on both here.

Serving the dual purposes of entertainment and  of learning, stories have been a part of human culture for as long as there has been human culture.  In this modern age, we have so many to choose from, be they books, television, movies and of course, games.  However, with so many other varieties of story available, in order to determine the purpose ( or the what) of  Roleplay Games you have to ask why folks choose to play in a roleplay game instead of reading a book or watching a movie.  One response I got from my questioning was that they struggle to read books.  I have quite a few friends who , for various reasons, struggle with reading massed text on the page.  In some instances it is a manifestation of dyslexia, and in another it is the symptom of an education impaired.  Playing in a roleplay game might involve some reading of rules to make your character or to learn what they can do, however it is a short commitment which limits the difficulty.

And, done properly, a roleplay game is not competitive the way many boardgames are.  In fact, cooperation is often critical to survival.

If you are playing monopoly there is only one winner.  The winner.  In a roleplay game, your objective is not (necessarily) to defeat the other players or even the Games Master.  Don’t get me wrong, tension between characters can really add to a game and the Games Master is present to frame a story and create a challenge for you, however chances are, the players succeed or fail as one.  This collaborative aspect, combined with a story that is presented by a Games Master,  makes roleplay an accessible hobby.

Furthermore, once accessed, players are encouraged to participate within the theatre of the game.  They become mini-actors/actresses playing roles that they have designed, and therefore have some investment in.  They are encouraged to engage with their friends in a non-standard fashion, through this theatre which almost acts as a buffer helping some to boost their confidence.

Another person told me that they enjoyed Roleplay Games because they didn’t want to feel like a consumer.  They did not want to consume mass produced entertainment.  The Roleplay Game, for them, was a mechanism by which they could create their own adventures, create their own stories.   Only one person said that, however in all the people I spoke to, the desire to create a story and be a part of it was strong.  People choose to identify with characters in books, movies and TV shows as they see parts of themselves in them.  Or perhaps they see potential.   I am pretty sure it was Steven King who said that most good stories can be expressed as a “What if…” statement.  A roleplay game is a living manifestation of that idea.  What if you lived in a fantasy world, as a wizard?  Or in a cyberpunk universe ruled by corporations?  What if you were an immortal?  Roleplay games aim to allow the players to answer these questions, making them escapism in one of its purest forms.

And then there are those who like the fact that a roleplay game is not restricted by a board, or a video game setting.  Admittedly some people do use boards, or tiles to aid, though they aren’t always necessary (they can be helpful).  Regardless of whether or not you use a board and miniatures, or not, you are not restricted to the limited number of actions that you might have in a video game or a board game.  You are limited only by your imagination, and if the Games Master is doing their job properly, you should be rewarded for creative solutions to problems.  To put in layman’s terms, you might be a well equipped party confronted by a bunch of bandits but that doesn’t mean violence is your only option.  In fact, in some situations, direct frontal attack on your opponents in the game is potentially the worst option available to you.  Roleplay Games encourage creativity and craftiness.

And, of course, playing the game utilising the various rules mechanics can be fun too.  Your character can likely do things that you can’t do, and sometimes random chance will achieve you an extraordinary level of success.  Which feels great!  For instance, your basic field medic skill might allow you to safely remove a bullet from a comrade’s head without doing more damage because the game mechanics are on your side today.  (you rolled the best possible dice outcome) And there is also progress within the game.  Progress can mean getting to the end of a dungeon or quest and finding out what was going on or, in this specific case, it can mean your character develops, gaining new abilities and whatnot.  Stories from novels or movies are as much about character journey as they are about plot development.  And their analogues within the game, quest completion and leveling up your character, provide satisfaction.

When all is said and done, the purpose of roleplay games is to have fun.  That should be no surprise to anyone who reads this.  However, what may be unclear to some is the additional benefit of the game.  They are more accessible by virtue of what they are, and can be made more so by a skilled Games Master (more on that in future chapters).  They encourage socialising outside your comfort zone which can boost confidence.  They encourage creative solutions and craftiness within their players.  And, if you are using a real setting, properly researched and delivered they can be used as a vehicle for learning.

Thanks for reading, and I’ll see you next time!

Community, featured, Gaming, the quest for the perfect roleplay game