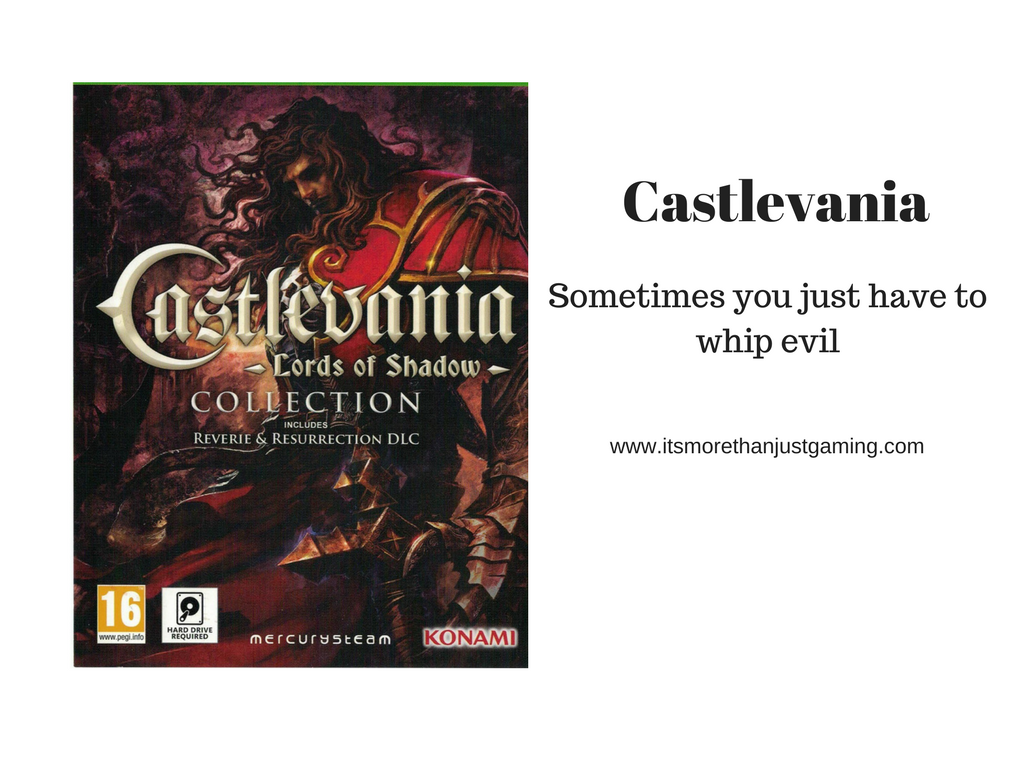 Hello everyone, you are very welcome here today.

And on this day I am going to take a trip down memory lane, and bring it up to the present.  I am going to briefly talk about my not quite first video game experience, talk a bit about the franchise and then the Netflix series that premiered on the 7th July.

I am going to talk about Castlevania.

Castlevania was a side scrolling adventure platform game where you play as Simon Belmont, whip wielding vampire hunter, as he invades Dracula’s castle.  Along the way, you have to overcome various monsters, find secondary weapons (Such as throwing axes or holy water) and eventually find Dracula’s lair, where you can kill the undead fiend.

This game was a lot of fun, and when I got an NES of my own, I got Simon’s Quest – the sequel.  It was nowhere near as good, sadly though the Nintendo sponsored book of the same name was an entertaining read.  Since then there have been numerous sequels or re-imaginings on various platforms, two of which I own – Castlevania: Lords of Shadow 1 and 2 – for the X Box 360.

I still haven’t completed Lords of Shadow as I tend to flit between games, and bluntly it is a complex game that I still have not fully mastered (OK, maybe not too complex but there are a lot of controls that I still haven’t mastered and I tend to restart the game to learn them if I haven’t played in ages.  Which I haven’t)  .  In Lords of Shadow, you play Gabriel Belmont, voiced by Robert Carlysle.  The game is naturally brought up to date in terms of graphics, the story and narration were compelling and the gameplay felt very much like Castlevania meets Arkham Asylum (in that you develop new techniques and gain upgrades along the way.  No predator mode though 🙁  )

All of this pre-amble is to give a bit of background to a franchise that I have enjoyed, but only dipped my toe into as it were.  Someone mentioned to me, earlier this year, that Netflix was making a series.  A kindly soul shared a page on facebook reminding me of this yesterday (06/07/2017), so when the four episode series came out (this morning, 07/07/02017) I was prepared.  Armed with the second finest coffee in the land and a breakfast that gives personal fitness trainers night terrors, I sat down and watched all four episodes.

Castlevania, the Netflix series, focuses on the conflict/genocide/extermination inflicted by Dracula on the citizens of Wallachia after an overzealous church burns his wife at the stake for the crime of witchcraft.  She was, of course, innocent.  It is established early on that she sought out Dracula to learn his secrets to become a better healer.  A woman of strong character, and more curiosity than fear, she wins Dracula over and that is that.  Until she is killed.  (May be a bit of a spoiler, but this happens in the first 4 minutes).

When Dracula hears of her death, he is understandably enraged.  She grounded him.  For the time they were together, he opted to live as a human and abandon his dark powers.  Her death creates a void in him, that grief and rage are only too happy to fill.

And then we meet the hero.  Trevor Belmont, voiced by Richard Armitage, is the last son of an excommunicated family, now a cynic and a drunk living hand to mouth and wandering wherever beer is on tap.  He wanders into the midst of Dracula’s purges of the country and is forced to make a choice.  Apathy and Oblivion, or to stand and fight – as his family always did.

Castlevania is an enjoyable if short fantasy horror cartoon.  I loved the look of Wallachia.  Even before Dracula becomes enraged it looked spooky and awesome.

Then, things naturally ramp up, with graphic images of slaughter to remind you that you are watching a horror cartoon.  And, Castle Dracula itself is amazing. It is established early on that the castle can travel anywhere, so when it rises from the ground amidst the screams of terrified peasants, it is no surprise but that does not detract from its visual power.  You are left with the impression several times, or at least I was, that the castle is a biomechanical organism.  If you want to understand what I mean by that, then you’ll have to watch the show.

I really enjoyed the fact that I empathised with Dracula’s grief.  He was the wronged party.  Granted, his response was not (in my opinion) wholly justified being akin to a child’s tantrum at the world.  Albeit a child’s tantrum with an army of monsters to back it up.  However, I still found him to be a sympathetic character as he showed some mercy.  What was also interesting to me was the parallel between Dracula and Trevor Belmont.  Both of them had lost faith in humanity, one becoming genocidal and the other self-destructive.  In both cases the root cause was a small group of people, however both held all accountable as no one spoke out against the cruel and unjust actions of various parties.  It was an interesting message about the nature of complicity with crimes.

Trevor Belmont is also quite interesting, though less interesting than I found Dracula.  Whilst he is largely absent from episode 1, and spends episode 2 brawling with peasants that belong in the unfunny cut of Monty Python and the Holy Grail (they were basically talking politics, like the peasants in the mud in Holy Grail.  But they weren’t funny) he does have a compelling arc, starting at rock bottom, being forced to reclaim his heritage as a Belmont; the heritage of a monster hunter.

You have a reasonably strong supporting cast, including an elderly mentor voiced by Tony Amendola (but most definitely not Master Bratac from Stargate SG1, also played by Tony Amendola) and Alucard, played by James Callis (Baltar from Battlestar Galactica).  The series makes a few nods to the video games such as Trevor jumping onto stones and ledges over a bog, whilst the water bubbles away, or Trevor muttering to himself,”Notice you’re dead..” just after he gets a (what he believes is a) lethal strike on a monster that hasn’t fallen over yet.  And there are quite a few unexpectedly funny moments, usually in the form of gallows humour from Belmont.  I may have mentioned it on twitter…

If the series had one weaker aspect, it was the way it treated clergy.  For the vast majority, the clergy of the time are portrayed as selfish, murderous and egotistical, which I realise is not unreasonable with the time; I simply would have prefered at least one sympathetic priest who doesn’t keep in step with the Bishop.  This would have made the appearance of a helpful priest in the final episode more believable.  I don’t really have too much more to say at this point.  Castlevania was an enjoyable 100 minutes, that is begging for a second season.  Hopefully, we won’t have to wait too long.

3 thoughts on “Castlevania: It’s more than just a game”