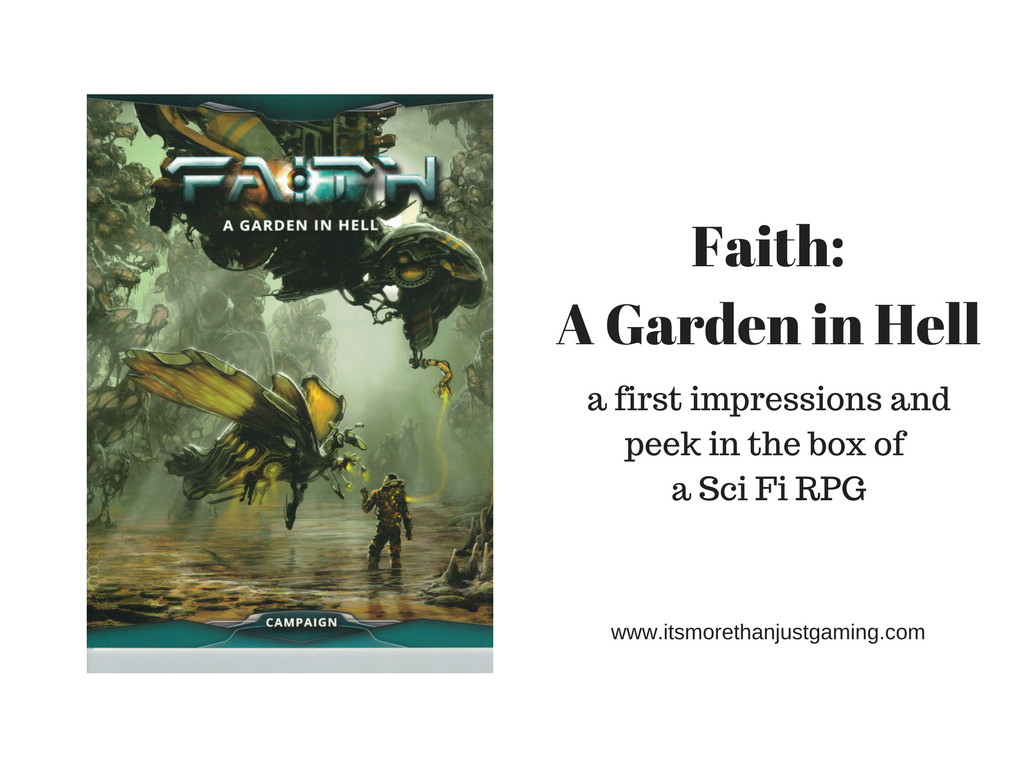 Hello everyone, you are very welcome here.  Today I am talking about a recently purchased Roleplay Game, Faith: A Garden in Hell.

The Faith: A Garden in Hell starter box is packed with stuff and looks like a lot of fun.  There are several high quality boss cards that have amazing quality graphics on them, a rulebook, and campaign guide.  There is also a quickstart card and a “learn to play comic”.  And, the first scene to be played is “a learn as you play scene”.  This makes the game quite accessible quite quickly.  The “learn to play comic” was also quite funny.

I think there is also a lesson to be learned here…

The game is set in a galaxy that is at war with the Ravagers, a powerful alien swarm that spreads, conquering and devouring to add other genetic material to their swarm queens.  They are opposed by the Coalition, an amalgam of two previous warring factions; the spiritual Iz’Kal and the business like Corvo.  Faith: A Garden in Hell is a roleplay scenario set after a Coalition Ambush doesn’t go quite according to plan.  The game follows members of Team Inferi, soldiers in a Coalition Marine Recon Unit that have crashed and are now effectively marooned on the uncharted and hostile world NT-44-2 along with a wounded Swarm Queen.  Play starts from the point Team Inferi regain consciousness, and determines the success or failure of the Coalition strategy.

I purchased this game for a number of reasons.  The story sounded interesting and I don’t tend to play sci-fi rpg that often, even although my first experience of roleplay was in Shadowrun back in the 1990s.  So, I thought it was time to have a crack at sci-fi.  I also don’t usually play out of the box adventures, preferring to write my own.  However, I thought I might give it a go as it takes some of the prep off me meaning we can play more often.  That is also why I got the Lone Wolf game, that I wrote about previously.  And the graphics also grabbed my attention

I first saw the game at the UK Games Expo last month, and started chatting to one of the staff.  The art drew me in, then he really got my attention by telling me the game was diceless.  I have no particular issue with dice in an rpg, though I am not a fan of the fact that there is usually a botch mechanic.  Granted, random bad stuff does happen, particularly when you are being shot at or are under assault by space monsters…

…however, I was never keen on the idea that a person whose skill is on par with an Olympian could randomly fail something that is second nature and fail so badly they injured themselves, broke their equipment, or exposed themselves and their companions to more danger.  It always felt a bit arbitrary.

This game settles challenges based on cards of 4 suits, numbered 1 to 13.  Each player starts each scene with 7 of these cards.  In a challenge, player and adversary compare totals.  To determine their total, they play a card face down and add appropriate skills and modifiers whilst the Gamesmaster does the same for the game/adversary.

In this way, you can play your best card to give better odds of success early on, but if you do, you can’t use it again.  Or, you can save it for later, and play a lower value card, representing a more cautious approach where your attention is not only on your immediate circumstance but your surroundings too.  Or, you can draw one from the deck and take pot luck.  It might be high, or it might be low, representing a reckless attempt to complete something.  The reason you would do this, your seven cards are your stamina.  So, each scene you can do seven actions or seven actions plus draws from the deck if you are willing to take the chance.  No stamina = no actions.

The game ships with 4 premade characters that form Team Inferi.  Each character has their own skills and a fairly detailed bio to help get you into character, though there are some basic rules for character creation should you wish to play other members of the team.  In fact, if a character dies it is encouraged to have the player create a character with the same amount of accumulated experience to represent troop replacements from the recon ship.  So, character death doesn’t exclude players, though that doesn’t mean you won’t feel bad when your persona gets ripped apart by a ravager swarm.  Or steps on a well hidden mine.

The final thing I will briefly cover is Faith.  In this game there are 5 gods that your characters follow, Kaliva, Vexal, Hexia, Ergon and Ledger.  Each represents different ideologies and has a series of commandments.  Devout adherents to the commandments are able to exercise power in the game in the form of miracles.

The commandments are also ways to help guide a player about how their character views the world and responds to it, so some may see this as an aide to play.  Others might find it constricting.  There are notations in the rules stating that if a player is adhering to principles not in line with their deity, then you can swap in game and the player should be able to take their new patron’s miracles.  This seems quite reasonable and can be achieved with relative ease, though shouldn’t be a small thing.

3 thoughts on “Faith: A garden in Hell”