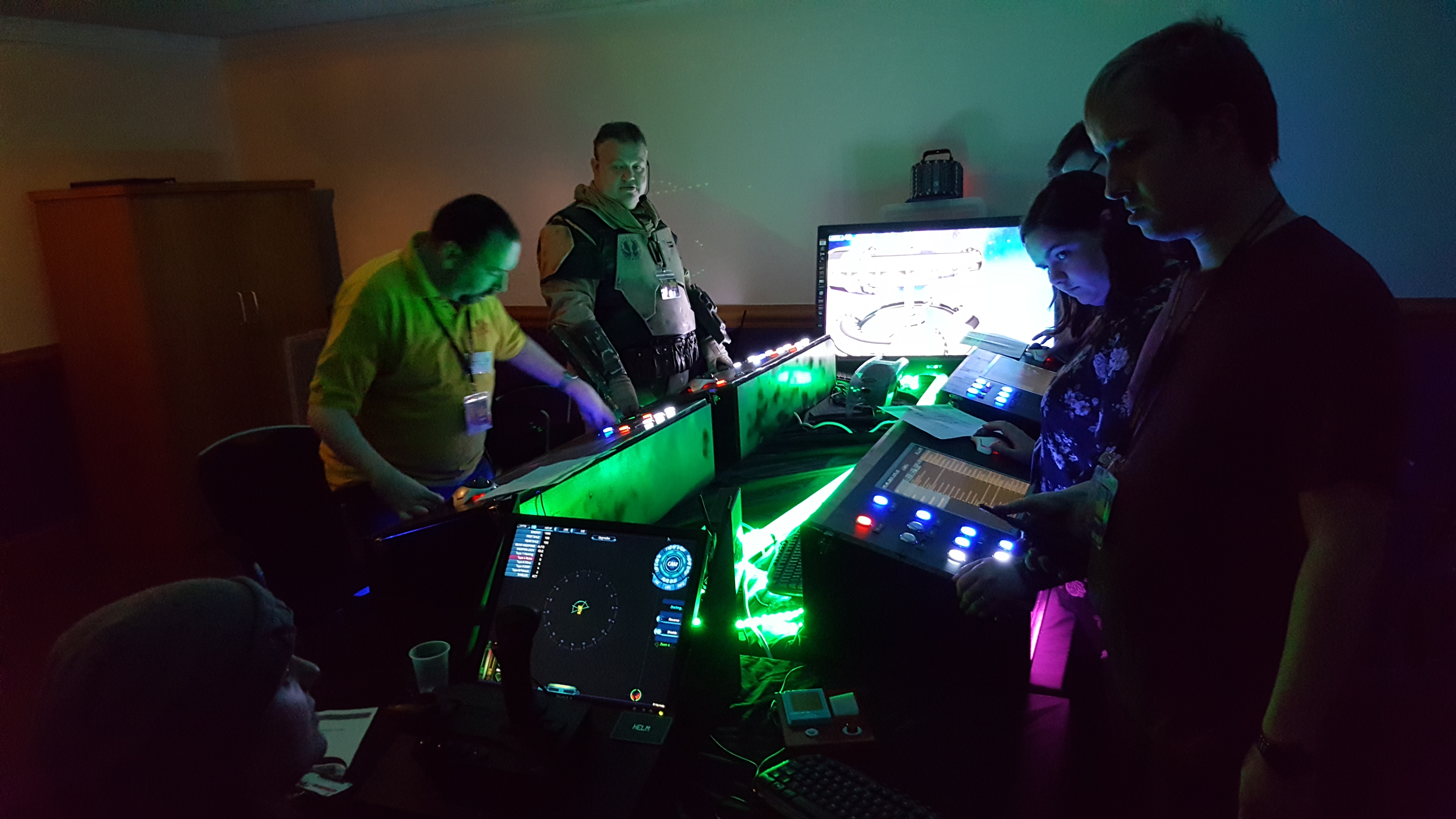 As regular readers are aware, I recently volunteered at the UK Games Expo, down in Birmingham.  This was a momentous experience for me, and I wanted to talk about one of the things that happened to me on the last day in the final hours of my last shift.

Due to extreme pain that resulted from activity on Friday I did sit down jobs for the rest of the weekend, much to my great relief.  Sunday, I staffed the ticketing desk which wasn’t especially busy as it was the last day.  There was one thing that I had not been able to do that I really wanted to over the weekend, and that was to attend the Starship Bridge Simulator.

So, when one of the crew who were operating it came in and asked how many sign ups there were, and we discovered there were nine but only six had shown up and they needed twelve I felt my fortune might have taken a turn for the better.

I shameless yelled, “I volunteer as sacrifice,” which I have to say is a big thing for me as I have only seen the Hunger Games movie and I disliked it, so I had no business paraphrasing it.  Rightly, the Volunteer Team Leaders said it would have to be offered to Expo guests first, so we went out and shouted and got the numbers up to ten.  To fill the last two spots, myself and a cosplay volunteer (dressed as Boba Fett) were allowed off duty to go and play at spaceships.

So, what does all of this mean?

The Uk Starship Bridge Simulator is an event team that runs the video game Artemis for people to come and play.

(This video is used for the Artemis Trailer on Steam.  Uniforms are optional…)

Artemis is a game I had heard of but never played because it requires six players (you might get away with five but I don’t know).  Each player takes the role of a starship bridge officer, from Weapons, Engineering, Helm, Communications, Science and Captain.  No one player gets to see the whole picture simulating a Star Trek style bridge simulation.  The UK Starship Bridge Simulator arranges their consoles in a configuration to give some semblance of a bridge to create immersion.

My role in this game was Science Officer, which meant I was in charge of sensors – so I probably had the best view of the game (albeit it wasn’t high graphics but that isn’t where the fun lies).

Using the sensors, I could call out course headings for the helm and alert the captain to obstacles on the map as well as the location of enemy ships. I could scan said enemy ships which allowed me to call out shield frequencies to weapons, giving us a better chance against their shields, and I could also learn information about the ships and crew by performing multiple scans.  I’ll be honest, this broke immersion slightly, but it was funny.  I scanned a ship and discovered that the captain had a wife and kids, relayed this to Comms, who then proceeded to threaten them.  The ship surrendered.

We played this game for 45 minutes against another crew and the event coordinators called it a solid draw as neither side had destroyed the other.

This game was a lot of fun for me, not for the actual game mechanic itself but the Live Action Role Play Element involved.  It really felt like we were running a bridge on a starship.  It didn’t matter to me that I was looking at one screen with low graphics content, rather than the viewscreen which is where the action was taking place.  Though, it was 45 minutes leaning over a console which my legs and back took a long time to forgive me over but I consider it ultimately worth it.

I think for a group of Sci-Fi fans that are capable of RP this is perfect game.  I can also see it as an educational tool, or a team building exercise.  To win you really need to learn to trust one another, rely on one another, prioritise and deliver concise useful information.  Who hasn’t worked in a place that could benefit from that teaching?

If you like Sci Fi and you have five friends who all have computers that can run Artemis, then this is a good cooperative PC game that is just a bit different.  You have the sci-fi feel.  You have the necessary learning of communications and chain of command skills.  And it is usually pretty cheap on Steam, if you use that platform.

You can find out more about the UK Starship Bridge Simulator by clicking the link.