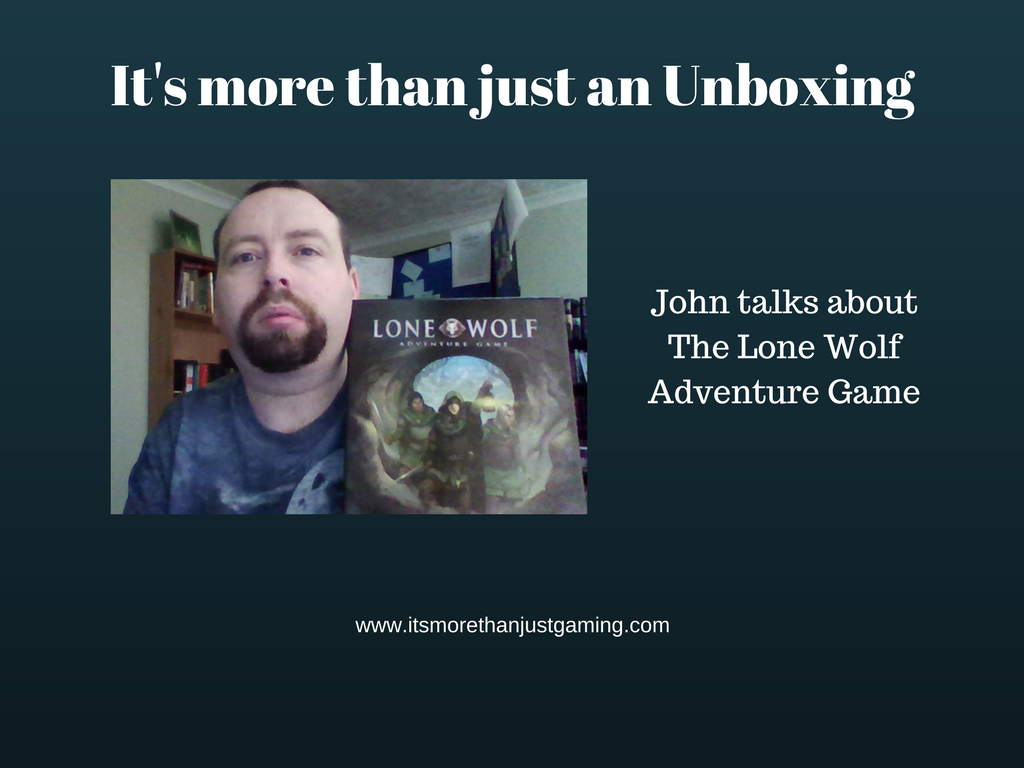 Today I am going to be having a look at the Lone Wolf Adventure Game, by Cubicle 7 Games.  The small party crested the rise, the village laid out before them.  True Song was already scouting ahead to determine if there was any bandit activity, though as far as could be seen, the place looked deserted.  The militia squad leader leaned on his pike, bored.

“Maybe they didn’t come from here.  Place looks like no one has been there in months.”

The other soldiers in the escort murmured their agreement.  Such discussion was forcibly terminated by the frantic blast of a horn from the village.  A blue glow appeared in the town square, and a wave of dread washed over everyone.  Cursing, the squad leader turns to you.  “You’re the Kai Lord.  What do we do?”

The Lone Wolf Adventure Game is a roleplaying game for 2 to 7 players, set in Joe Dever’s world of Magnamund, following the adventures of the Kai Lords; powerful warrior monks imbued with power by Kai, God of the Sun.  The Lone Wolf Adventure Game is the successor to the Lone Wolf  choose your own adventure books, also by Dever, where readers take the role of the Kai Lord, Lone Wolf.  I only managed to play a couple of these, however I did enjoy them and they were quite distinct from the Fighting Fantasy books of the same era.  For a start, as a Kai Lord you had access to a lot of really cool powers that weren’t available in most Fighting Fantasy Games.  Second, the books could be played in sequence as part of an ongoing campaign, much like a roleplay campaign where the Book is games master.

The Lone Wolf Adventure Game comes in a very tightly packed box, so lets have a peak inside.

As I noted in the video, the game ships with 6 pre-made Kai Lords for quicker startup.  Here is the character sheet for one of them.

As you can see, you get a bit of background flavour and motivation as well as an overview of True Song’s strengths.  This is true of all the premade characters.

Of course, if you are like me, you are never going to be fully satisfied with a pre-made character and the Lone Wolf Adventure Game does not disappoint in this regard.  There are a collection of high quality, double sided (one character per side) character sheets.  Though, truth be told, I would probably just scan the empty sheet and print off as needed.

The Box also provides a map of the world to give player and games master a feel for the setting they are playing in.

And of course, there are three rulebooks provided in the starter box.

The Book of Kai Legends is the  basic Games Master’s guide for the Lone Wolf Adventure Game, providing two adventures and help on how to write more.  It is strongly advised that players do not read this book as it will spoil their fun.

The book of Kai Training is essentially the player’s guide, giving basics of play, background on what Kai Lords are and how to create your own.  It is suggested that players and games masters can read this at any time.

The Book of Kai Legends is the Advanced Dungeon Master’s guide, detailing various conditions characters may find themselves in, providing more details on various systems (Including combat), details on character progression, and a bestiary of foes that can be brought into adventures.  It is suggested that this book be read after completing the first adventure, and not before – probably as it will be easier to understand once you have played the basics.

My first impressions are that there is a lot in the box and, given that the first adventure is intended to teach the game, the learning curve shouldn’t be too steep.  The production quality is high and aside from scrap paper and pencils, everything needed is in the starter box.    I have to say, I am looking forward to trying this out in the near future.