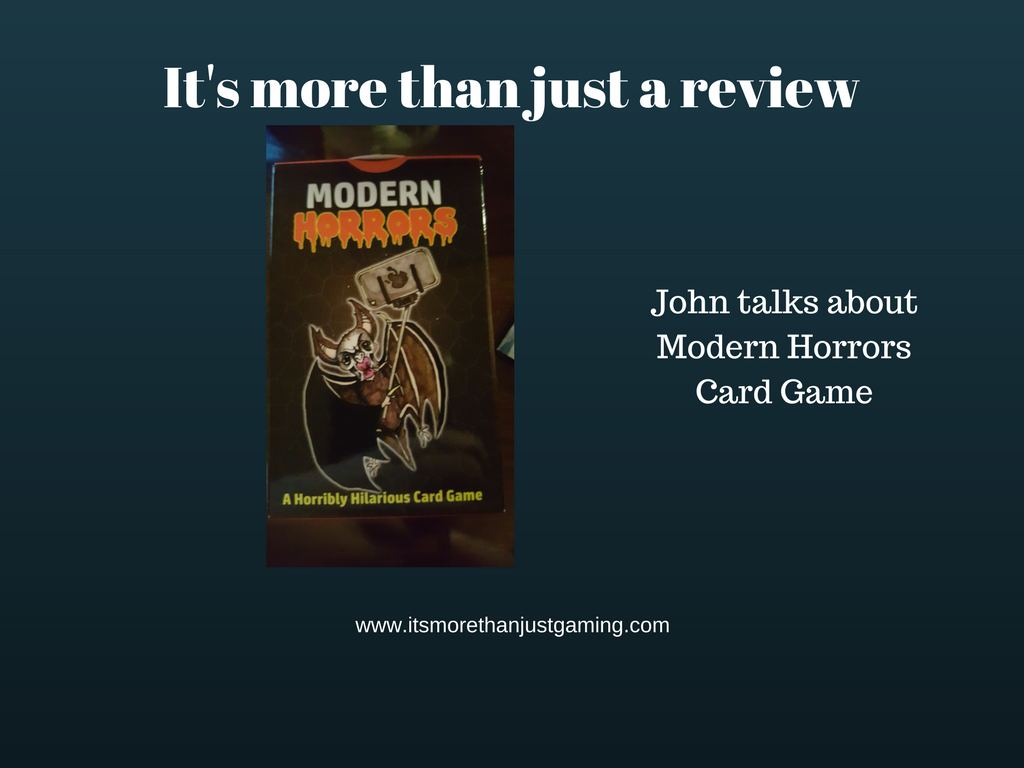 Hello everyone, you are very welcome.

Today I am going to be reviewing Modern Horrors, a game I spotted at the UK Games Expo.  I should inform you I was given a copy of the game free for review purposes.

Tucked into a corner of the expo, adjacent to a T Shirt Stand, I found Nick Swift, creator of Modern Horrors, and started talking.

He correctly judged my age to be of the generation that remembers when Top Trumphs was a big thing in terms of gaming.  For anyone that doesn’t recall, or wasn’t alive back in those olden days of gaming, Top Trumphs was a cardgame where players deal out every card of the deck, and then player one reads out one of the stats on their card.  Each player reads out the value for the corresponding statistic on their card and the player with the highest score wins the hand.  The winning player designates the next stat and play continues until there is only one player left.

The awesome thing about Top Trumphs was that there were loads and loads of varieties.  I had Marvel Superheroes, Marvel Supervillains and Helicopters.  There were sports cars, tanks, planes, monsters, aliens and so on and so on.    And there were Horror Top Trumphs.  I never had them, but a friend did.  They were quite graphic and gruesome.  Modern Horrors is grown from that particular background.

Playing very much like Top Trumphs, Modern Horrors takes a humorous and satirical view on horror and modern life.   Each of the cards represents a modern stereotype, with an amusing graphic and the 4 stats: Power, Fear Factor, Shitegeist and Horror rating.

The humour is quite relatable, though I have to say it is very British Humour and possibly wouldn’t appeal to other folks (Tell me in the comments if I am wrong).  There is a bit of the same style of humour as Cards Against Humanity or Joking Hazard though not exactly.  By this I mean there is some quite funny shock humour.

Modern Horrors has much to recommend it.

There aren’t really any negatives that I could see, if you take the game for what it is.  An easy to learn game that isn’t too long and is just a bit of fun.  The only thing that raised an eyebrow was that when we were down to the last 2 players of the game, which took about 70% of gameplay time, the final two dropping to last player standing took about 30% of the gameplay (We had 5 players)  For those of us knocked out early, the to and fro between the final two players was a little bit boring, but if you take into consideration that the game lasted little more than 10 minutes we weren’t waiting too long.  We also came up with a house rule that stated when you get to the final two players we measure decks and the largest won.

I should also note, if you are easily offended then this game might not be for you due to the graphic nature of some of the cards.  If you are looking for a time filler game, or a stocking filler, then Modern Horrors is a pretty good fit.