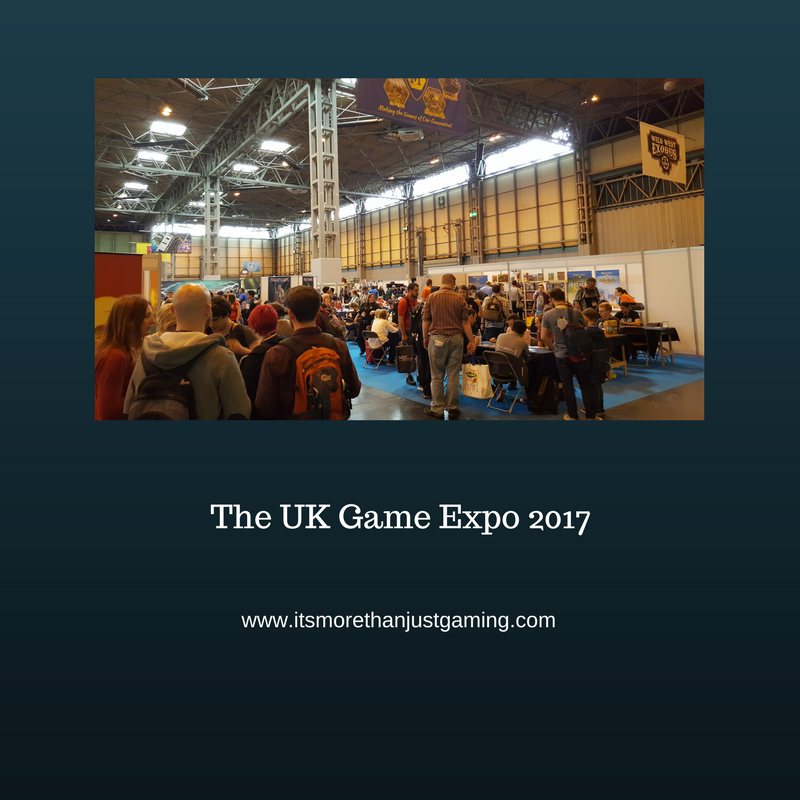 In this post I am going to talk a bit about my experience going round the UK Gaming Expo as a guest, however, unfortunately, I won’t be able to give my thoughts on everything available as I only really had time to wander round the trade stalls and have a chat with some developers to see what stuff is available that I had never heard of.  I have picked out my favourites to write about today.

Dead Throne (On KS from 1st June 2017, so, now…) is billing itself as an open world RPG set in the realm Veles of where all the players are vying for the throne of Lirenor.  I got to see a prototype set up and I have to say, the production quality is high and it looks awesome.   I am going to do a full write in a future post, so I will leave it at that just now – suffice it to say, it looks amazing and it was the first thing that stood out to me at the Expo Trade Hall.  I would say the Kickstarter Goal is quite high, however if the project doesn’t fund you lose nothing by backing it and last I checked there were quite a lot of Early Bird pledges left.

Colourful things draw my eye, as you might expect (I am a bit of a gamer magpie) and the booth for Scrooge definitely fell into that category.  Hitting Kickstarter in September, Scrooge is a competitive game where players attempt to out-Scrooge Scrooge…and each other.   They travel the board trying to make money, dealing with nightmares and ghosts and other obstacles and resources.  I liked this as all the characters in it were from various Dickens books, and that was just fun.  It also looks like a good Christmas game for a bunch of friends or family to have a laugh about.  Will talk more about this game in the future when I have more to say.

As part of my trek around the Expo I found myself talking to Nick Swift, creator of the Card Game Modern Horrors.  He very kindly gave me a copy to review, so I will do full post shortly.  Suffice to say, Modern Horrors is a fast paced game that pokes fun at modern life, with hilarious artwork and satirical stereotypes.  Keep your eyes peeled for the future post, it will be worth it.

My eye strayed and saw Gloomhaven written above one of the stalls, and since I was a backer I thought I would visit.  The stall was selling reuseable stickers for Gloomhaven (Gloomhaven has a legacy element), and I thought I would get some.  Unfortunately they were sold out.  However I then spotted Great Scott!  Great Scott! is a deck drafting game from Sinister Fish.  Players build crazy inventions from the various cards, and then have to describe their utility.  From discussions with the helpful girl at the stall, you can win based on the points value of the invention or just your hilarious descriptions.  It is something I will need to acquire at some point…

Yeah, it wasn’t all just gaming.  Like with a Comicon, there were artists and writers showing off their stuff.  James Hayball was one such artist, and I have to say his work was fantastic.  I was drawn to the top middle piece which looked like Dystopian Chinatown – which it basically was.  Then I saw the one top left, the castle being attacked by the face in the sky.  It was phenomenal.  There was also an Ultramarine Dreadnought from Warhammer 40k which, as an Occasional Dark Angels Player, I had to disapprove of.  Not because the art was poor, it wasn’t.  Simply because Ultramarines are boring.  However, the art was good and I reckon I’ll be getting some to frame and if you like his stuff, then you can find him on the James Hayball Facebook Page

In my recent post Gaming leads to other media I talked briefly about some people playing music to set the mood for their games.  Aside from once using Oh Fortuna! that I recorded from Excalibur (long before spotify or I knew about youtube) to add atmosphere to a cavalry charge, it is not something I tend to do.  However, it is good to know that there are folks who actually put together CDs of specific themes to play in the Background.  Erdenstern are one such group.  A German based company,  there is a large selection of music compilations of differing themes.  Each compilation has a free taster track, and there are a few unattached free tracks on the website as well.  I am quite tempted by their Into the Dark compilation for my Vampire the Masquerade games…

Ok, so I had very limited time in between my various volunteering shifts (not a complaint) and truth be told, I can only scratch the surface else I would be writing for hours and hours, and your reading would stop long before you got anywhere near the end.  So, I give over the rest of this post to a few photos of other things that I saw.

As I say, I can only really scratch the surface of the Expo – I hope this gives a flavour and an encouragement to attend next year.

10 thoughts on “It’s more than just the UK Gaming Expo part 3: Being a guest”