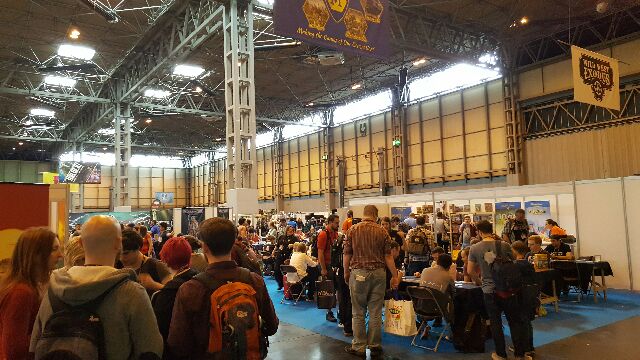 Hello everyone.  You are very welcome here today.

I recently attended the UK Game Expo in the Hilton Metropole and NEC in Birmingham, and I thought it was worthy of several posts.

For those of you unfamiliar, it is a Games Expo, I daresay the largest one in the UK.  From Friday the 2nd to Sunday the 4th June, people will descend on these venues looking to find all manner of things gaming related.

As I start writing this post, at the end of Day 1 I can tell you it has been pretty much an amazing day.  And truth be told, I barely saw any of the Exhibits as I was one of the volunteers staffing the Expo.

So, just an overview – What is the Expo.  Crash course, the UK Game Expo is an event that celebrates every facet of gaming.  There is a trade fair

where you can purchase gaming stuff off all descriptions, and possibly even meet a few familiar faces (I met a guy I know from Uni.  I am not at Uni anymore and he lives 100 miles away from me, and I saw some exhibitors I met at Albanaich)

There are vast halls for people to bring games to play with their friends, though sadly in an event as popular as this one has proven to be, if you don’t get into the open gaming halls early then you might lose that opportunity due to limitations of space.  If you have a table, a lending library of games provided by Thirsty Meeples (A gaming cafe in Oxford), available in the NEC during the day and the Hilton at night, is available for a nominal refundable deposit.

If gaming is more your intent than shopping, then there are roleplay games available to join in offered by experienced Games Masters, and any number of playtests of new games or games going to Kickstarter (Keep an eye out for my post about going round the EXPO itself).   There are also bookable shows, such as live roleplay sessions, panels and other gaming related stuff (Keep an eye out for my post on “The Dark Room”).

directing folks and what not though I did staff a desk and I was assigned one post called “The Door Troll”.  This post was another human sign post with a very specific purpose.  The Monarch Suite, used at previous expos for open gaming, was booked  by another secretive organisation…

It was my job to gently dissuade anyone from going into the Monarch for the purposes of gaming, though use of the toilets in the lobby outside was fine as was use of the lobby for lift access.  This was quite amusing when a bunch of lads had just come from the NEC (with its high security and bag checks) and I suggested I might have to check their bags to make sure there weren’t any games in them before allowing them to pass.  They took it for the joke it was, and laughed it off.

On Saturday, Matt – my  volunteer team leader, took pity on the fact that I could barely walk the night before and was still not 100% and allowed me to set at the information desk all day directing folks.  And given that there were usually a couple of other volunteers on duty (at least for my shift), this was not especially taxing – which allowed me to recuperate somewhat after a grueling first day.  The high point was when a guest asked for expertise on how to do a proper selfie, and two of my colleagues rushed to assist – one of whom had previously been schooled on the correct angle to hold the camera by Bill Nye, the Science Guy.  (So I am reliably informed, I was not witness to that great moment)

All right then, I think it is time for me to sign off as it is quite late when I am typing this.

Talk to you later