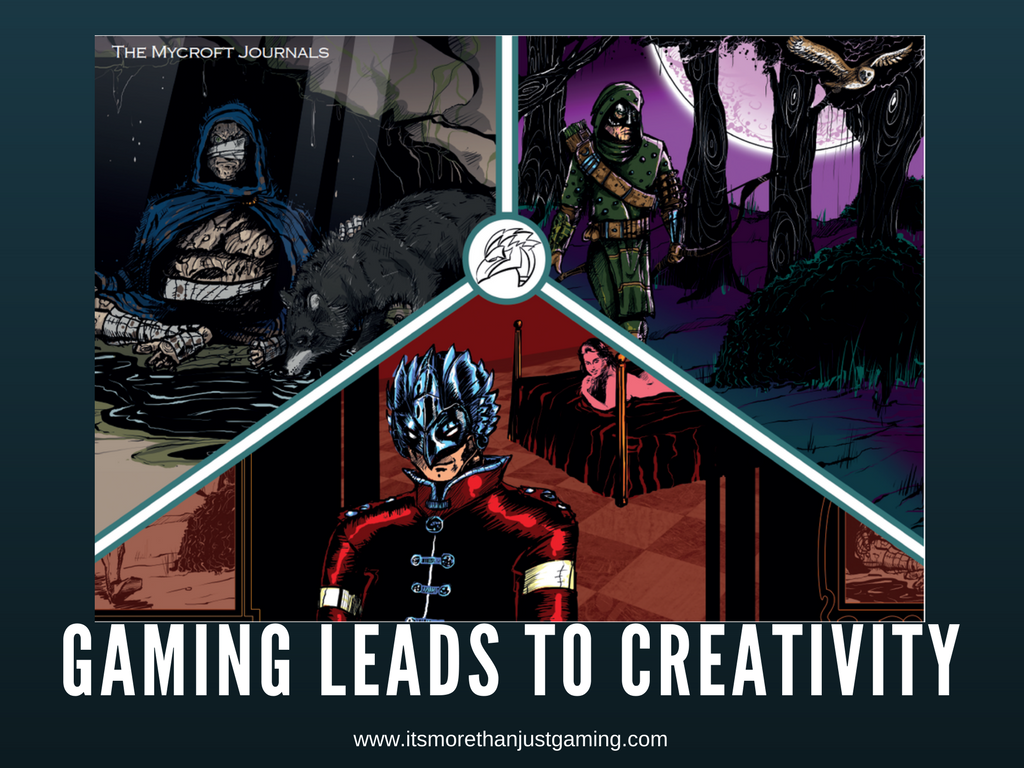 Hello everyone, you are all very welcome here today.

Today, I am going to be talking about another advantage of being part of a gaming community.  I have spoken about how gaming has made me a better writer, as it gives me plenty of opportunities to experiment and it even demonstrated where plots needed to be shored up.  I am going to take this a bit further.  Gaming can lead to other media, and helps grow creativity.  Disclaimer.  This post contains affiliate links.

I have spoken about this a few times, and for those of you who are new to my site, welcome and I will say it again.  I believe that many games can be considered to be forms of literature.  I daresay there are Literature Professors (large P, not small p) who would choke on their high tea and scones at hearing that.  I stand by my statement, as games tell a story.  I realise I cannot say all games tell a story, not with any certainty as I suspect in order to do that I would need to delve into the depths of Genre, define what qualifies something to be a genre and then find genre for things like Dominoes and Snap.  If we discount them, but include things like Monopoly, Chess, Draughts (Checkers in the US), a

nd then go on to things like Arkham Horror, Descent and Twilight Imperium, then it is actually a lot easier to believe.  Monopoly is a story about rival business folks engaging in capitalism, whereas Chess is the story of two tribes going to war.  Every move you make in a game is another paragraph of story.

You can channel this creativity by turning your game into a story, for example I did this in my recent post about Twilight Imperium.  I was writing an account of the game, as well as an overview of how to play, and to make it interesting, I wrote some of the game events as seen by the characters within.  I recently wrote a review of V20 Vampire the Dark Ages Companion.  Knowing that not all of my readers are interested in this sort of product review, I added context fiction relating to the elements reviewed to give them a flavour, to give them a reason to read.  And, of course, I write The Mycroft Journals after every session of a roleplay game.  It would be easy enough to create original content in each of these worlds now.  The same goes for anyone else wanting to put in a bit of practice.

If every throw of the dice or move on the board is a story, every story must have a scene or location to occur in, and for those of you more interested in creating with colours, shades and lines as oppose

d to words, propositions and sentences, then you could apply yourself to drawing something to represent your game.  If you are playing Risk, and defended your European/Asian border for an entire turn, meaning 7 extra reinforcements, perhaps you want to draw the dramatic moment where your army sent your foes running.  Perhaps you have been playing an adventure game, like Descent, Heroquest or Super Dungeon Explore and want to recreate the epic boss fight?  Or perhaps you are in a role playing game, and you decide to flesh out your favourite character with a few pictures?  And let us not forget that for those of us with games that include realistic, to scale miniatures, they can be painted.

Something that I would never have predicted a few years ago, but has become prominent in our consciousness is the Let’s Play video on Youtube.  For the last few years I have generally watched various videos about video games to determine whether or not I wanted to buy them.  When I was working up the nerve to purchase Twilight Imperium, I scoured youtube for any and all “How to play” videos (there were about 3) to make absolutely sure I definitely wanted to fork out as much money (I did.  It was the right choice…).  There are now countless videos, lets plays, how to plays, and even some that are basically soap operas (Not of Twilight Imperium, I am talking in general terms here).  And there are more than a few spoofs out there too.  The embedded video is not one of mine, though it is one of my favourites…

Music is a powerful media as it evokes strong emotional connections.  I am told by people who are more knowledgeable than me that sound (and smell) have a stronger impact on your memory.  All I know is that I have watched any number of rubbish films, all of which I forgave on the grounds the music was good.  I was forgiving of Van Helsing, Delta Force and the Stallone Judge Dredd movie because all of them had music by one of my favourite musical score composers,  Alan Silvestri.

The point I am making is that music has power.  When it is right for the situation, you know.  Longer than I have been a gamer, I have created playlists that represent characters (first from books, then from games), and more than a few people I know actually like to look for mood music when playing games.  I confess, this area I am not an expert on.  There is a fantastic piece of music made by the folks over at Yogscast, called Diggy Diggy Hole.  I never saw the original let’s play video, but by all accounts it came from a game of minecraft where one of the Yogscast gamers started singing “I am a dwarf, and I am digging a hole”.  I saw the video much later.

This video was appropriate to my time in life.  I was working as an Academic Officer for a Students’ Union, which meant a significant part of my job was attending committees and boards which is about as exciting as it sounds.  I also had to help arrange events for students to attend.  One thing that the Students’ Union and the University sometimes got wrong was their approach to involvement.  They always wanted to add sparkle to things that folks found boring.  I was more about helping folks think that something doesn’t need to be billed as glamorous or fun to engage people (yes, it helps).  For a start, if they really don’t enjoy it then all you achieve is folks who don’t come back as they realise all that glitters is not gold.  For me, it was always about trying to help folks understand important things are worth engaging with, whether glamorous or not.   This video embodies that, the desire to dig – which is boring but important to dwarves in some lore.  Quite impressive given that it came from someone humming whilst playing Minecraft.

I should note, on my last day in Office, just after I put my “I have left office” out of office reply on my email I sent an email to about 60 managers in the University sharing my thoughts (again) on the process of engagement.  I embedded Diggy Diggy Hole in that email. I got a few responses…

In my life I have written fiction as a result of games, I have drawn pictures (not so well as others) and painted miniatures, watched videos and performed unboxings for games, and I have engaged with music as  a result of being, and from the perspective of, a gamer.  My ultimate point is that playing Games is a Fun Activity, but that doesn’t mean it cannot lead on to other things educational.  Or humorous.

What has gaming led you to?

7 thoughts on “It’s more than just gaming: Gaming Leads to Other Media”