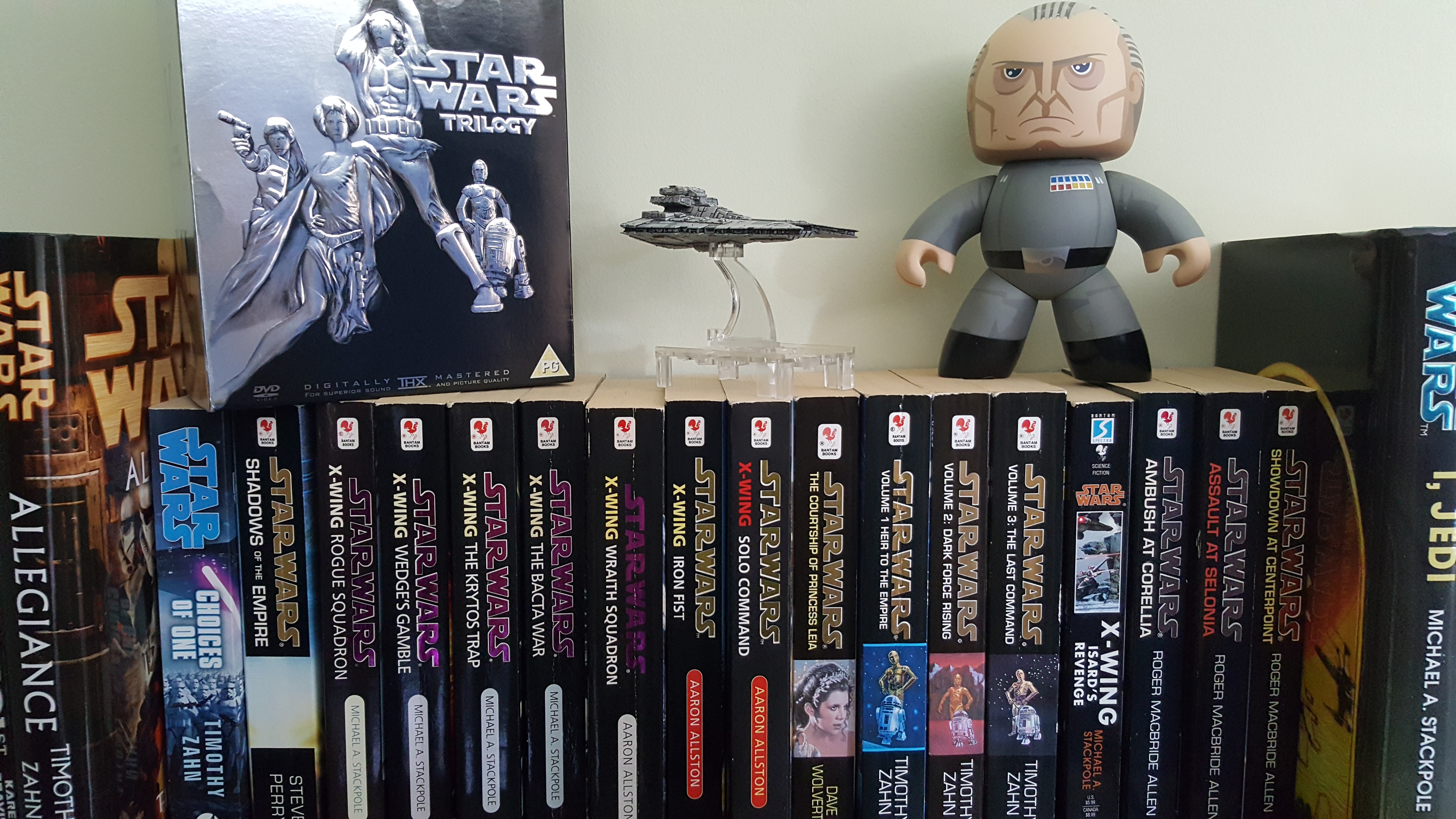 Given that today is May the 4th, which I am reliably informed might be loosely related to Star Wars, I decided to do this post.

I apologise for nothing regarding that video.

Star Wars came about just before I was born, and it was a feature every Christmas of my childhood.  It was an appropriately epic movie with space ships, laser swords and a really scary villain  (We knew he was powerful.  Only powerful people have capes).  Empire Strikes Back and Return of the Jedi happened, and the fan base continued.  Star Wars stayed alive many years into my childhood as a result of Toys (I had General Veers, Darth Vader, Admiral Ackbar, the Millenium Falcon, an At At and an At St.  A few more as well but they were the main toys for me).  And then, by the end of the 80s, excepting the odd comic and the never to be watched infamous Holiday Special, Star Wars faded from sight.

It had a good run, George Lucas had established himself and probably never needed to work again, so what is the harm in Star Wars becoming a Christmas Movie and a childhood memory?

Because Star Wars wasn’t done.  In such a vibrant Universe, three movies (I haven’t seen the Ewok Adventure so cannot count or discount it.  I am not counting the holiday special) and a couple of TV Shows (Droids and Ewoks) were insufficient to tell its story.

In 1991, Heir to the Empire, by Timothy Zahn was released.  I believe this was the first book to be released in the Extended Universe of Star Wars, though I could be wrong about that.  It is certainly the first book I look to when I think of the extended universe, and if I am honest with you – I enjoyed the story more than any of the movies.

The reason this was such a good story, and a better story in my opinion, was Grand Admiral Thrawn.  Made famous by Star Wars Rebels Season 3, Grand Admiral Thrawn came about nearly 30 years ago as a character.  He was ruthless, smart and actually demonstrated loyalty to the ideals of the Empire and his troops.  That is not to say he was a fan of corrupt bureaucracy, merely that he believed in order.  And as the Thrawn novels continued throughout the 90s (I even believe he made appearances in the X-Wing/Tie Fighter video games, at least in cut scenes -though don’t quote me on that.  I never played them as I suck at fighter sims), you actually get more of an insight into him and Palpatine’s motives for taking over.  Obviously these were created after the fact, the original reason being that Palpatine was strong in the dark side and the dark side corrupted him.  In the expanded fluff, Palpatine was aware of an impending invasion from an extra-galactic threat (The Yuuzhan Vong – I started reading this series, but it felted disjointed and boring.  I gave up after a planet fell on Chewbacca.  Spoilers.  He died), and sought to unify the galaxy to meet them, theorising that a squabbling senate would be a less effective defense than a singular autocrat.  Thrawn’s story has him exiled during the Rebellion, as a result of failing at Imperial Court intrigue (I suspect the TV show Rebels will exile him in series 4 for failing to deal with phoenix squadron), though it is later revealed that was a cover to send him back home and begin building what would become known as the Empire of the Hand.  A second powerbase to fight the Vong.  For me, in hindsight that is a much more interesting story.  Granted, such a story is easy to write (well, easier to write) in hindsight when the original trilogy exists.

Speed forward to the end of the 90s and you suddenly have prequel movies.  They weren’t great, let us face it.  It was interesting to see the genesis of Vader, but it always felt rushed to me with some really awkward lines sledgehammered in to justify his fall.  However, Star Wars was in vogue again.  No longer reliant on books, to keep it afloat, two Clone Wars series were spawned and a CGI movie.  The movie wasn’t great.  Both the series were, the CGI series being the better of the two (at least for me) as it didn’t focus on any one character.  You got to see the clone wars from the viewpoints of all of your favourites and some characters you didn’t even know about.  For instance Clone Arc Troopers, and Captain Rex & Commander Cody

You also had Knights of the Old Republic as a video game, graphic novels by the bucket, more books exploring the expanding universe, and the Force Unleashed Game  until 2015 saw the release of a new movie, the Force Awakens (or, as I call it, a new New Hope, done not so well).  A lot of folks really enjoyed Force Awakens. I have no issue with that.  Being a fan of the expanded established universe, I didn’t.  However, The Books and Video Games are essentially fan fiction when you get to it.  I can accept multiple parallel Star Wars stories, in the same way that I accept multiple Marvel Movie Universes, all of which don’t relate to comics.  I can accept them all as versions.  But, to say I was disappointed in the Force Awakens, well that would be an understatement.  In my mind, Star Wars was kept alive by fans from 1991 to 2015.  These fans wrote novels and created games, and they kept the Star Wars conversation alive.  The Force Awakens disregarded all of that, which I felt was a tad disrespectful.  But as I said earlier, versions.  I will admit personal bias here.  I preferred the Grand Admiral Thrawn story aftermath of Jedi.  It was a great story idea that stretched back and forward, with believable villains and protagonists.  Force Awakens ignores all of it.  However, if you go to a movie expecting something and you don’t get it you are less likely to be a fan.  I suspect folks who enjoyed the movie had fewer hangups or expectations than I did.

Of course, I can’t do a post about Star Wars, on a gaming blog, without mentioning the various games I have played relating to it.

Star Wars Rebellion – The Videogame, formerly Supremacy, a strategic game of the 90s – and it was great.  It is a computer game.  I played until I won.

Star Wars Armada, a game of naval combat in space.  3 games, one victory.  I will get better.

The final thing I will talk about, before drawing this all to a conclusion, is my favourite Star Wars movie, which coincidentally happens to be the most recent one.  Rogue One.

Yes, I know, heresy.  Rogue One technically isn’t Star Wars, it is simply a Sci Fi war film in the same universe.  I still count it as my favourite.

I loved that the movie expanded on the internal struggles (dare I say politics) of both the Empire and the Rebel Alliance.  The villain, Director Krennic has all the power of the Empire backing him, but is under constant siege from his peers and superiors.  You see a man with everything, whose very attire is a statement about how powerful he is (he wears a cape – or maybe he is trying to convince everyone and himself that he is powerful), but who really only has the power given him by tyrants.  On the other side you get to see a more realistic rebel alliance, willing to murder and bomb civilians (I guess you could say collaborators might be considered legitimate targets, depending on your viewpoint. I still class them as civilians given collaboration may well be coerced) just to get a specific target.  You get to see that they aren’t all heroes.  They are desperate people in desperate times.  It was realistic.  That is why I liked it.  Plus it had an amazing space and ground battle too, and several Amazing Darth Vader scenes.  What isn’t to love?

Star Wars started as a science fiction saga, quite possibly one of the finest to make it onto film, but when you get right down to it, it is a fantasy tale with knights, wizards, an evil empire and even charming rogues.  And I think that adds to its longevity as a franchise.  Science Fiction changes and dates.  Star Trek in the 60s was cutting edge, but in an era of automatic doors and 3d printers the future is already here.  However, there is something powerful and timeless about fantasy as it places stories in the past, in the realm of fairy stories which loans it something even more powerful than the force in persuading people – Nostalgia!  Nostalgia takes us to our childhoods, to simpler and fun times.  Add to that our tendency to romanticise fantasy, with its chivalrous knights and wise wizards, we get to experience the joy of a child watching Star Wars for the first time on Christmas Day.  Fantasy is timeless, as Star Wars is timeless.  It is no mistake that despite a few gaffs (in my opinion) along the way, Star Wars is still going strong even to the point of appropriating one day a year to be a Star Wars day.

Happy May the Fourth to you all!