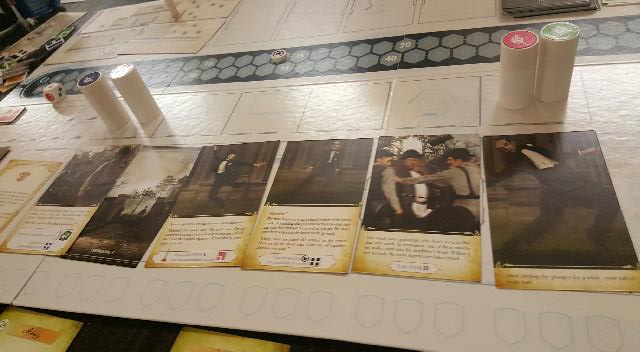 I was recently invited to play a boardgame called “Time Stories”.  It was sold to me as a Quantum Leap meets Source Code style board game, where players are temporal agents sent back in time (or to another dimension if you have an expansion) to prevent disasters.  I believe I was the only geek in my generation who didn’t watch Quantum Leap and I never really was that interested in Source Code.  I did like Seven Days and I had heard positive response about this game  from people I trust, so I decided to give it a go.

Time Stories is produced by Asmodee, which would have put me off if I had known that as the only games I have played by them are Formula D and Jamaica.  I should point out, I don’t dislike Asmodee.  I don’t like racing games as I am rubbish at them, which Formula D and Jamaica are.  Time Stories is a race against time, but I am happy to say I thoroughly enjoyed the game.

The game board looked a bit sterile when I first saw it, but I decided it was best not to judge.  To give you an idea, the Grey Hexagons down the middle were our time limit (our adventure started at 25).  Every time you do a thing, the track decreases 1.  Every time you go to a new location, the track decreases based on a dice roll. When it reaches 0, the temporal agents must return to base.

The area to the left of the track is where specific location cards are placed (face down).  The face down version shows a picture of the room you are in, and supplies a description of everything going on.

Players then choose which part of the room they wish to interact with.  In the case of the Dormitory, there are 2 hidden parts that only unlock when you find the relevant tokens at other locations.  Each player moves to their location and they are flipped simultaneously and they each get a bit of the story.  In this case, it is missing people in a Parisian Sanitarium.  I chose to look out the window.

Visiting a location allows you to flip the card and interact with it.  In this case I got a clue about a winged cat, and given that Manticores had already been mentioned, we figured we were on the right track.

No more “How to” as we get into spoiler territory.  I was a bit concerned that replay value was low as the core game came with only one story.  However, after playing the game, and running out of time, I am happy to confirm replay value is high.  Given the likelyhood of failure on the first couple of attempts, and the temporal agency footing the bill for multiple insertions, you are able to go back to try and solve your mystery.  Of course, each time you go back you have to start from scratch – like Groundhog Day.  So, you might have to remember to talk to a specific person in a specific room, in order to unlock a hidden location, whilst also finding the key to get into another hidden location.  You have to decide whether or not you want to fast talk your way past one of the characters in the story, or do something eminently more brutal.  (We did brutal).

And, for added value, you are time jumping into the body of a patient at the Sanitarium.  I was the small cannibal girl.

The Photo quality wasn’t great as I was using a phone.  Time Stories doesn’t fall into my favourite category of games, but it is one of the most interesting games I have played in a while. and I look forward to the next time I get a chance to play it.