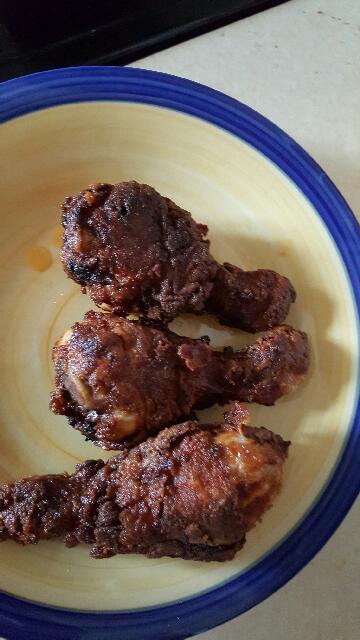 Back when I was at University, and attended a games club several times a week, I found myself in the situation where a bunch of us would order food from takeaway places as they were better than campus food (the campus food was ok, and did get better, but still…).  We would choose a place, sort out our order, arrange all the money required to pay for the full amount and then call the order in.  Or do it via web.  We did it this way for a while as we frequently managed to get offers from the takeaway food places, and so we decided to invest any change as a result of special orders into the club’s funds – thus we raised funds by eating.  This appealed to us.

One of my favourite orders, and one of the main reasons my sporran doesn’t currently fit me, was fried crunchy chicken.  basically, chicken, pan fried in a tasty crispy coating.  Really bad for you, but I was not measuring its merits on healthiness but on deliciousness.  Since leaving university, I have not been able to find any such chicken in my locale.  Which is probably a good thing for my health.  However, it would be nice to have it for a change.

So, if the chicken won’t come to me then I must go to the chicken.  I was inspired to do this when I saw the following video as a youtube suggestion.

After watching the video, and following its instructions I made my first attempt at fried crunchy chicken.  It wasn’t a disaster.  But it didn’t look much like Chef Ramsay’s chicken.  And, it tasted of flour. Two attempts later, I mastered it.

Once defrosted (1 day before eating), you want to add some flavour, as well as a binding agent.  (I think it is called marinading.  For God’s sakes Jim, I’m a gamer, not a cook).  Gordon Ramsay used Buttermilk.  I used Homepride cooking sauce, tomato and bacon flavour.

Add a bit of salt and pepper to the mix, and then put cling film over the bowl and leave in the fridge overnight.

When it is time to eat, or more appropriately about forty minutes before, you get a dinner plate and put a small layer of flour along the base.  This is trial and error.  Too much and your crunchy coating tastes of flour (I learned the hard way).  I then add in Paprika, Cayen Pepper, Garlic Salt, Salt and regular Pepper.  Mix it up as best you can with clean hands.

At this time, have a pan with about a centimetre or two of oil heating up.  Careful it is doesn’t get too hot!

Take your chicken from the fridge and roll it in the flour until it has a coating.  The sauce or buttermilk will help make the floury mix stick.

You want to be cooking the chicken for a minimum of 25 minutes, 30 works too.  I turned the chicken using tongs every 5 minutes.

If it looks like the oil is going to start spitting, turn down the heat a bit.  Not too much, as you don’t want uncooked chicken.  This was trial and error for me.

After 25 minutes cooking the result was as follows:

Dieting started a the next day.

See – it is more than just gaming!

Gaming, It's More than just gaming

9 thoughts on “It’s more than just gaming: How gaming helped me be a more adventurous cook”