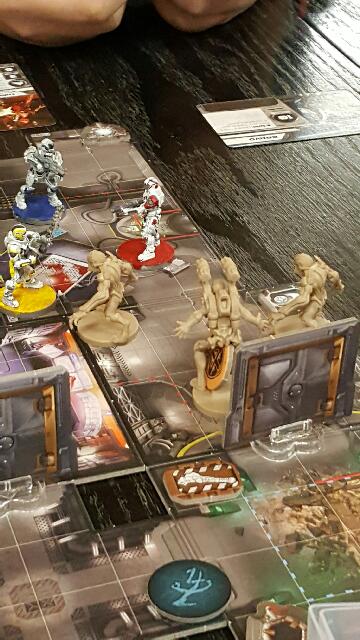 I recently had the opportunity to play one of Fantasy Flight’s newest mini/token/cardfests, that is Doom: The Board Game.

Doom: The Boardgame is a modular tile asymmetric game where up to 4 players control marines whilst 1 player controls the monsters.  Order of play is determined by a deck, which was bizarre at first but works pretty well to randomise things.  In essence, that alien face-stealer could jump in at any second, maybe you see it, maybe it sees you.  I quite like that.  Each player has a deck made up of equipment, and draws a hand of three cards.  They are allowed one main action and any number of basic actions (I think that was the terms).  Main actions are a card that has a weapon or maneuver of some description on it (I had lots of shotgun.  That was fun).  The card dictates speed, range and damage dice.  It was an odd mechanic, but on the other hand someone multi-pumping a shotgun isn’t likely to be running.  Damage is dealt according to dice, and players (including villain) negate damage by drawing the top card of their deck and checking for shield/dodge symbols.  Play was really quick.  We completed 2 missions in a couple of hours, it was really fun and there were a couple of really awesome things that appealed to me and the other players.

The missions make up a campaign, though as yet I don’t know about player progression after each mission.

In the game we played, we were fireteam Scimitar.  And I took the role of trooper Alpha the commando.  Below is a wee narrative I wrote about the game.

The blast door opened allowing Fireteam Scimitar access to the Lazarus facility of Phobos.  The scientists at the facility had apparently allowed some form of containment breach causing an infestation by hostile creatures.  Our objective: Sweep the facility and collect genetic samples from designated targets, then exfiltrate.  Hostile creatures to be terminated with extreme prejudice.

Our fireteam consisted of

Charlie took point, as per usual.  If he wasn’t quite so good at killing enemies, usually to the point of being drenched in their innards, I w

ould say he has a deathwish.  Every time, he is first into the breach, spraying in every direction bringing down foes left and right.  This time was no different.  He charged into the lab, met by creatures designated Imp.  Bullets caught the creatures, shreding flesh, muscle and bone.  And then he was on top of the thing, held it by its throat and ripped its head off.  More disconcerting was that this happened in silence.  It always does, and this felt wrong to me so  a while back I pulled the record of his internal helmet cam.  It turns out Charlie turns off broadcasting when he charges.  He laughs manically, and his eyes are crazed.  I don’t know what is more disturbing.  His berserk, or his silence.

A swarm of imps rushed at Charlie from nearby ducts.  They spat at him, and attempted to rip at him with tooth and claw.  He got off a couple of shots, slowing his new attackers but nothing more.

I signaled him with my gun lamp to switch his comms back on.

“Charlie, you all good?”

His transmission crackled, before becoming laughter.  “Yes, oh yes.  Don’t you see?  There are more of them…”

The swarm appeared to have only done superficial damage, so I left him to it.  Some of the new swarm surged past our resident crazy, hurling gouts of fiery bile towards myself and Bravo.  Bravo got to cover , but I was hit by the tailend of a shockwave as I leapt for cover.  I unloaded my shotgun into the offending imps, supported by a short burst from Bravo.

“You ok, Boss?”  Bravo was the rookie of our team, and our designated sharpshooter.  Good kid, still thinks there are good guys and bad guys in combat.  He’ll learn in time.

d, now cut the chatter!”  My momentary lapse whilst rebuking the rookie was all that was needed for a creature, designation Revenant, to swoop in on me.  I tried to fend it off, thumping it with the but of my shotgun.  The thing got past my guard and tore into my shoulder.  Our resident psychopath ran up behind the thing and tried to blow a hole in the back of its head.  His mania makes him frightening but does impair his aim from time to time, and he only winged it.  The creature either was unaware of the wound, or enraged but not debilitated by it and got revenge by tearing a wider gash across my chest.  Not to be left out, Charlie unloaded into the Revenant allowing me an opening to crawl into a corner, where I swallowed pain meds and sprayed wound sealant over the gash.  The stuff burns like a bastard, but it is good enough for wound treatment in the field.  The Revenant tried to pursue, but Charlie kept it pinned.

Feeling woozy from the meds, and not trusting my aim, I yelled, “Charlie, make a hole!”

He might be a maniac but he isn’t stupid.  He hit the floor seconds before my shotgun blast passed over him, demolishing the face of the Revenant.  I swooped in grabbing the specimen of the Revenant for HQ.  This exposed me to ambush by a pair of Imps but Bravo w

as quick on the trigger, sending a precise volley into the creatures, stunning them allowing Charlie to swoop in and destroy them.

My Tac Display pinged an alert to me.  There was a weapon’s locker nearby, so using Charlie as cover, I hurried to the locker and found a Mini-Gun.  A spray of bullets from the gun, supported by Bravo cut a path through Imps attempting to overrun Charlie.

Charlie used the reprieve to charge ahead activating an onsite teleport, giving us an escape route.  Unfortunately, the activation of equipment drew the attention of two previously unseen creatures, designation Caca-Demons.  Bravo and I took cover down opposite corridors as the demons loomed closer, their accompanying imps attempting to flank me down another corridor.  We were ready for it, and when the Imp tried to strike me, Bravo and Charlie gunned it down.  Unfortunately, One of the Caca-Demons spotted me and began hurling acidic spit at me, burning through some of my armour.  Bravo, still on overwatch returned fire wounding the creature but not stopping it.

A portal opened which caused more Imps and Revenants to appear, which threatened our position.  However, Bravo and I held the line, as Charlie had other ideas.  There was another weapons locker nearby and one of his favoured toys was stored in it.  So, Bravo and I lay down suppression fire whilst he retrieved his chainsaw.

Once he had it, it was all over.  I could hear the device warming up as Charlie returned at a run.  He was ignoring cover and headed straight for the demons.  His chainsaw carving Imp and Revenant with equal ease, before plunging into the first, and then second Demon.  Bravo and I couldn’t help but stand and watch the carnage, ignoring cover and just looking on amazed at the scene.  Creature detritus lined the corridor.  Charlie stood above the corpses of the final intruders, samples staining his armour and much of the walls.  My scan showed no other active portals in the area, and no other movement.  I radioed command.  “Area secure.  Mission accomplished.”

Bravo and I walked to Charlie, his face stretched into that maniacal grimace.  I looked at him.  He looked at me, and Bravo, and said , “What are you girls lookin at?”

So, the game was fun.  I may have taken a little bit of artistic license in regards the characters portrayed in the fiction.  Though the player who played Charlie was playing like a maniac.  And I cannot unsee him with a berserk face now.  Sometimes, I am my own worst enemy.

Doom: The Boardgame is worth a look for franchise fans and novices alike.

1 thought on “Doom – A Boardgame by Fantasy Flight.”