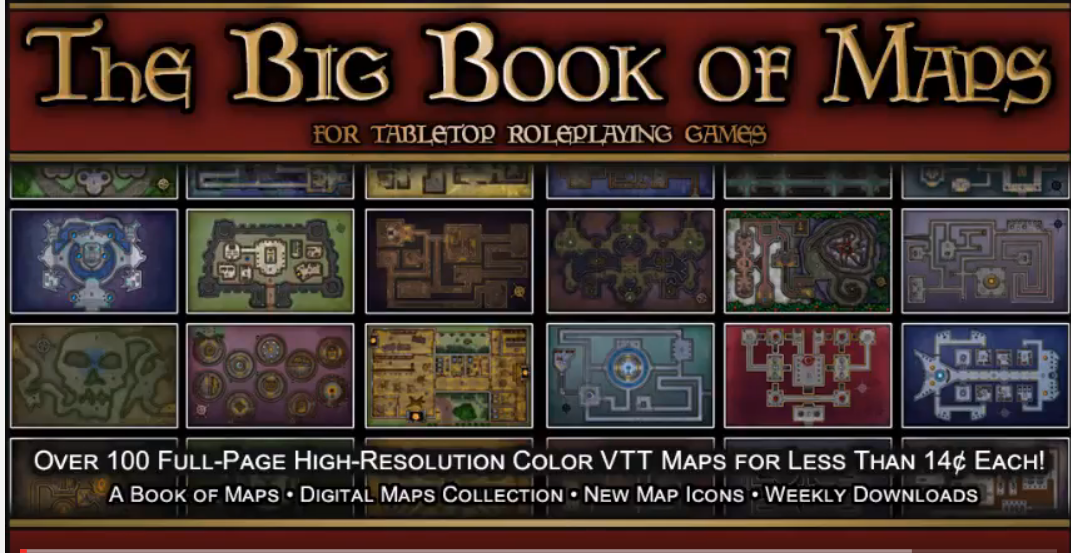 I was playing in a game of Dungeons & Dragons recently (5th Edition for anyone interested), which for the first time ever in an RPG (for me at least), miniatures and map tiles were used, and it made me think about the games I run.  I am not a huge fan of combat fests, so when I run a game I try to put plenty of things in it that are unrelated to combat, and if possible, solutions that don’t involve combat.  I thought about investigation for clues and realised that maps would be incredibly handy here.

If I describe a location to players, and for whatever reason, I muck up the description and only focus on the one item in the location worth searching, there is no drama.  At all.  But if you have a map, and your description just adds theme and mood, then players are at liberty to ask whatever they like without me spoiling it.  So, I started looking for map solutions.

I found The Big Book of Maps (For Tabletop Roleplay Games) created by Justin Andrew Mason, who keeps a blog on his Gaming related projects called Paths to Adventure.

The Big Book of Maps is a Kickstarter project where backers support the design of over 100 maps for use in tabletop RPG.  Admittedly, they are historic or fantasy, but since that is a significant portion of the market, so what?

So, from watching the video, you can see that there are lots of cool little dungeons, temples, castles, wilderness and urban locations.

At campaign launch there were a couple of preview PDFs available for you to browse, one of a dungeon and one of a cavern.

And, as of Campaign Update 3 there are 2 more samples available, the Dark Crypt Abode and a Bandit’s Lair.  I have had a look at all of the samples and have to say the quality is very good.  I haven’t had a chance to print any yet as my printer is being uncooperative, but these would look awesome on a Roll20 game.

This all has me quite excited for building maps for heroes to explore, with clues, treasure and traps.  And, if that wasn’t enough for you, the project has already funded and for every $500 past target, a map icons pack stretch goal is unlocked and will be made available to backers – even the $1 backers.  So, you can take your 100+ maps and customise them with holy symbols, traps, water barrels and so on meaning they are reusable for different locations – or the same location under different circumstances.  There are also optional add-ons for $7 include PDFs of previous map building tools (which is awesome) and even a modular dungeon card building system both made by the project creator which will be made available on project completion.

Add to that the fact that as soon as the Kickstarter is completed, maps will start arriving at the rate of two a week until it is complete, meaning that Games Masters  will be able to begin designing dungeons and stuff pretty much immediately.  I love it when a Kickstarter comes together!

Click this hyperlink to view the Kickstarter Campaign for The Big Book of Maps if this is of interest to you.