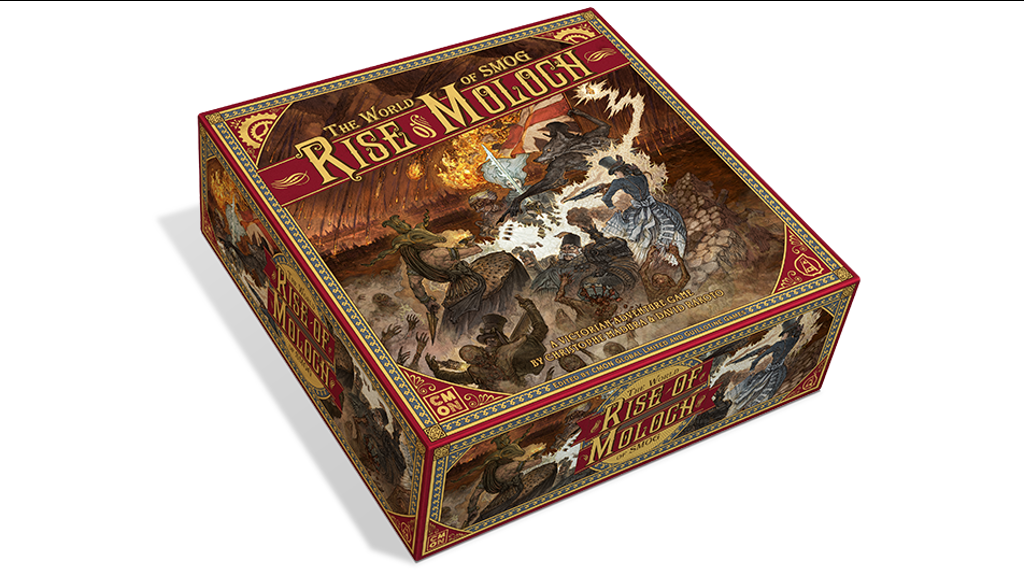 Hello Everyone,  I got an update about World of SMOG

Gentlemen! Today we’re going to take a look at a full example of Intermission.

We gave an overview of Intermission before:

A Look Into Items and Intermission

But today we’re going to have a full run-down example.

THE STORY SO FAR…

So for the sake of this example the Gents have just completed Chapter 1 and are playing the following:

For the sake of this example, the Gents did not pick up either of the Item Caches available (which would have given them a few random Items) during the Chapter (perhaps cause they were too busy saving civilians from a burning Police Station!), so they’re coming into the Intermission without any additional items than what they started with.

SETTING UP THE INTERMISSION BOARD

Graphics for the Intermission Board are still being finalized, so excuse the cards!

There are four static locations across the Intermission Board, each offering different benefits for visiting:

HARDY’S BAZAAR
At this location you’ll generate three random Item Stacks containing 2x Gear Items each. For 1 Conspiracy Point a Gent can claim one of these stacks.

WILKENSON ARS
At this location you’ll generate three random Item Stacks containing 1x Common Arsenal Item each. For 1 Conspiracy Point a Gent can claim one of these stacks.

SHADOW MARKET
At this location you’ll generate three random Item Stacks containing 1x Artefact Items each. For 1 Conspiracy Point a Gent can claim one of these stacks.

UNICORN CLUB
A Gent visiting this Location can choose 1 Upgrade for their Job and claim it for 3 Conspiracy Points.

In addition to the above Locations you’ll also generate 3 Random Locations from the Location Deck.

You’ll notice the various spots across the board as well- Each location can only be visited by a certain number of Gents each Intermission. So, for example, only two Gents can ever visit the Unicorn Club during the same Intermission, so you really need to coordinate with your team as to who is going where!

And now looking at the three Random Locations we drew:

By drawing The Weapon Locker we’ve opened up a new “Shop” location, granting us access to the following Items:

Now that the Intermission Board has been set up, it’s time for the Gents to decide where to go.

Naturally, our resident Mekamancer is immediately interested in The Laboratory Location. The issue is that it costs a staggering five Conspiracy Points to visit. Is the power worth it? He thinks so. Given this, the rest of the group discusses it and decides to allow it, but they’ll need to stifle the rest of their choices, least the Nemesis gains too much power for the next Chapter.

For his Upgrade, Walther chooses Ether Tank, to give him some extra juice for his Tesla Gauntlets. The random Royal Arsenal Item he draws is the Tesla Blade:

While it’s a great item in itself, Walther really likes keeping to his Tesla Gauntlets and asks the team if anyone would like the Item. Abigail speaks up and says she could use a nice weapon, and it compliments her Possessed Gift and “melee/short-ranged” nature. Walther agrees and so next game she’ll begin with the item.

Walther at the end of Chapter 1 Intermission

This also has the effect of opening up some choices to her, as she was originally going to get the Scythe. Deciding that she now has a better weapon, however, she decides to pick up Hook’s Hand, giving her a melee boost if she needs it during the next Chapter. Plus it’s only one Conspiracy Point, so it will help mitigate the five Walther spent!

Abigail at the end of Chapter 1 Intermission

Drago doesn’t much think he needs a Weapon right now. His Gift already allows him +2 dice when he Charges, and he picked up Enhanced Senses as his first Upgrade, so he’s getting Spread and +1 melee from that, making the Scythe a poor investment. He likes The Duelist, but he could also get the Lash Out Upgrade, which gives him Reaction and +2 dice when he uses it as well. Drago did feel he was starving for Ether a lot during the last Chapter, as his Upgrade and constantly charging does eat through it fairly quickly (The fictional Drago player is also not a fan of converting Crowns to Ether, since he just loves dealing damage and more damage. He is bad at resource managment and his fictional-gaming group has always had this issue with him, ever since their fictional-days of playing RPGs in their fictional high-school).

Drago decides to pick up the First Aid Kit and Whisky lot from the Bazaar. It’ll fix his Ether issue and give him some healing so he can focus on attacking. The Nemesis will gain one Conspiracy Point.

Drago at the end of Chapter 1 Intermission

Finally Major Dreadful is up. Looking at totals, he sees that the team has already given the Nemesis a total of Seven Conspiracy Points. While it’s a high number, the power the Gents have gained is pretty substantial, as these new weapons will help carry them through the rest of the campaign. Dreadful does note, however, that while the raw offense is good, a strong defense will help balance the group. He elects to head over to the Unicorn Club and train up, gaining the Taunt skill, which compliments his Grizzled skill he took at the start of the campaign. Since he started with a Shotgun and has his Steam Fist to fall back on he doesn’t see a huge need for any other weapons at the moment. This grants the Nemesis 3 Conspiracy Points, bringing his total to Ten.

Dreadful at the end of Chapter 1 Intermission

Now that the Gents have loaded themselves up with Upgrades and weapons, it is time for the Nemesis to plot. The Gents got a bit greedy this Intermission, namely Walther spending so much time in the Laboratory. Despite the rest of the team mitigating it somewhat by visiting low cost-Locations, they still fed him a great deal of power.

Right off the bat the Nemesis is gaining +2 Reserve Ether from the effects of the Laboratory, so there is a victory there. Looking over the next Chapter, the Nemesis notes the following:

Given that, she decides to spend three Conspiracy Points to boost her Shambling Zombies, giving them the [Hit+] = [2 Hits] Upgrade. She also decides to give them [+1 Melee] as well, since more dice = more changes to trigger [Hit+]. This costs her two Conspiracy Points.

She also knows that Ira gives Zombies extra activations, so boosting her isn’t the worst idea. She spends a further three Conspriacy Points to grant her +5 HP, as she starts a bit low and he wants to keep her alive.

Two two points remaining, she decides to gain an additional +4 Reserve Ether, cause keeping Ira fed is an idea she likes.

Finally, she picks a new Nemesis Power. She really likes manipulating Minions, so the first one she chose was Summon Allies. Going into Chapter 2, she really likes the idea of setting the Gent’s building on fire, which will also convert her Shambling Zombies into Flaming Zombies, so she goes with the Pyromaniac Upgrade.

It’s going to be a high-powered Chapter 2, as the Gentlemen have loaded themselves up pretty well with new gadgets and weapons! Of course, by doing so, the Nemesis has turbo-charged their own Agents and Minions- it will surely be a very bloody match to come!

Being something of a latecomer to the party, as it were, I am not massively versed in the Universe and haven’t read all previous updates as Cool Mini or Not were prolific after I backed, so this came as a nice surprise for me.  As an avid descent player I am familiar with the play mechanic of going on an adventure, and then returning to town to gear up.  (Also common play style in some DnD games).  The Intermission is a fascinating concept, given the campaign is broken down into Chapters, placing the players into the mindset they are players in a stage drama.  In essence, it’s more than just a game.  The language of the game says as much.

I love the idea of an Intermission Board with shops and things on it for the players to visit to gear up in preparation for the next round, and it seems to indicate players have control over which shops open.  I really like that.

And the nemesis gets bonuses to spend commensurate with however much the players spent.  A really good balancing mechanic.  I am really looking forward to this, I have to say. Twelve months isn’t so long to wait…