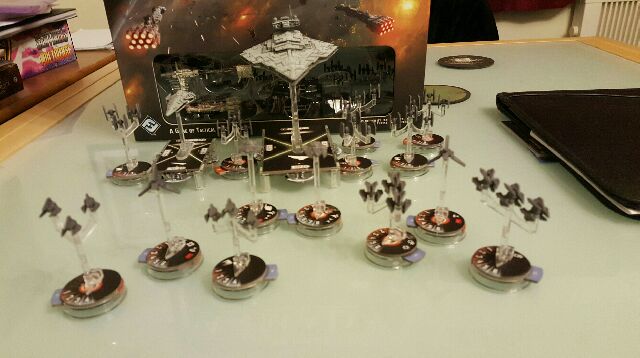 I am not the world’s biggest wargame fan.  I have nothing against them, but they aren’t a primary interest for me.  That being said, I do like fleet combat, and was a fan of Star Trek Attack Wing.  I am not going to talk about that just now.  I am going to talk about a recent hobby of mine, Star Wars Armada

A collection of my Imperial Ships

I decided to augment my fleet so I got an Imperial Raider, which is a small anti-fighter corvette, and a pack of additional fighter squadrons (Tie Defenders, Tie Phantoms, Lambda Shuttles and Decimators).  I really wanted Imperial Assault Carriers, an Imperial Star Destroyer and Fighter Squadrons box 1.  Fortunately for my finances, they were not in stock at the time, so I get to eat this week.

Yes, the game is expensive.  These days, what game isn’t?  Is it worth it?

I have to say, yes, it definitely is.  Aside from being Star Wars with the classic ships and some from extended universe, the gameplay mechanics are pretty good too.

Larger Ships do loads of damage, but the command dial system adds a logistics dynamic to the game lacking in Star Trek.  Basically, the larger your ship, the further ahead you have to predict your orders.  This may seem like a nuisance, but lets think about it.  The way starships are portrayed in Star Wars is very different from Star Trek.  In Trek, a handful of bridge officers pressing buttons can start every process on the ship (a vast over-simplification, but technically true), whereas on a Star Destroyer bridge, there are dozens of crew in the crew pits maintaining watch on all systems.  So, a larger ship needs to pass order down the chain earlier to have the right impact at the right time.  Whereas a smaller ship is much more flexible.

I went to the local games club and played a game.

My first real foray into Star Wars fleet combat will not go down in the annals of history as a resounding Imperial Victory.

The Victory Star Destroyer Bunion, accompanied by 2 Tie Defender Squadrons, a Lambda Shuttle and a Decimator did battle with the Rebel Assault Frigate Honey Badger, the Corvette Inconsequential and about a million fighter squadrons.  Bunion with its escort fighters demolished the Honey Badger, but unfortunately succumbed to Fighter-Bombing.  Another good mechanic of the game is to recognise that a big ship with big guns means precisely nothing against fighters.  Particularly if the fighters are X-Wings and Y-Wings, which are very good at bombing ships.

So, ultimately it was a rebel victory.  But the most important thing is that it was incredibly fun.

When my Imperial Star Destroyer (name to be confirmed) shows up, with my interceptors and bombers, things will be different.